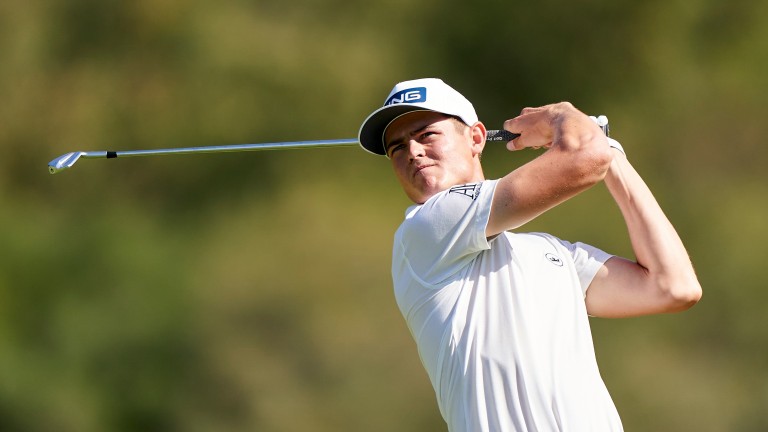 Wilco Nienaber could be the man to beat in Sun City this week
Quality Sport Images
1 of 1
By Steve Palmer UPDATED 2:41PM, DEC 1 2021

The emergence of a new Covid variant and the resultant travel chaos have meant the South African Open has been downgraded from a DP World Tour event to mere Sunshine Tour status, but a decent field remains for the Gary Player Country Club shootout and Sky Sports are showing live coverage.

Christiaan Bezuidenhout, who romped to a five-shot victory at the GPCC last year, is clear favourite. He registered back-to-back European Tour triumphs, having won the Alfred Dunhill a week earlier, but his form is less spectacular 12 months later.

Bezuidenhout, who earned a PGA Tour card in September and will be concentrating on Stateside golf next year, may be lacking the form and focus to retain his SA Open title. The short price is unappealing. Dean Burmester is competing for a fifth consecutive week and is equally unattractive at the odds.

The stage may be set for one of the most promising youngsters in golf to land a second Sunshine Tour title this week. Wilco Nienaber has been struggling to establish himself on the main circuit - he narrowly missed out on a DP World Tour card in the Challenge Tour Grand Final - but the power-packed 21-year-old knows he will regularly receive sponsors invites.

Nienaber will always be welcome on the Sunshine Tour - on which he won the Dimension Data Pro-Am in May - and the downgrading of this week's South African Open to Sunshine Tour status has taken a lot of pressure from young Wilco's shoulders.

Nienaber is competing to win his national Open - not earn a DP World Tour card - and a free-flowing performance can be expected. The Bloemfontein giant grew up a five-hour drive from Sun City and did well on his pro debut there in last year's SA Open.

Despite three double-bogeys over the weekend, Nienaber tied for 11th place, carding 20 birdies. A year later, more mature and well-rounded as a player, and driving his ball with assurance, this birdie machine can be expected to cut out the horror holes which ruined his 2020 challenge.

Storms are forecast for tournament-eve, with more on the horizon for the weekend, so Sun City should be playing soft. With gentle breezes throughout, Nienaber must be licking his lips in anticipation.

Bekker's best result of 2008 came at GPCC - 13th spot in the Dimension Data - and he was 20th in the South African Open there last year. Even better can be expected this time after a brilliant campaign on the Challenge Tour.

Bekker switched his focus to the Challenge Tour in April and has posted four top-threes on that circuit this year, finishing seventh in the Grand Final to clinch a DP World Tour card. The life and career of Bekker has suddenly gone up a level, and he may ride the crest of this wave by adding his name to the SA Open trophy.

Complete a four-pronged attack with two other course winners. Lyle Rowe is a South African journeyman who has won three times on the Sunshine Tour. The last of those victories came at Gary Player Country Club a month and a half ago - in the inaugural Blue Label Challenge. That was Rowe's first trophy for five years - and was the culmination of a strong burst of form from August onwards, with three top-sixes on his home circuit.

Rowe opened with a disappointing 75 in the Joburg Open last week, but recovered well with a second-round 67. Only four players in the Joburg field outscored Rowe in the second and final round, and he is worth chancing at three-figure prices at a happy hunting ground.

The same can be said of Alex Haindl, who triumphed at Gary Player Country Club in June, leading all the way in the SunBet Challenge before winning by a shot. Haindl followed up with another Sunshine Tour victory at the end of August, then finished 20th in that Blue Label Challenge won by Rowe.

Haindl has four top-20s on his CV at GPCC and the four-time Sunshine Tour champion can thrive there again this week. He was a European Tour player in 2012 and has performed well before in similar standard events to this one - like the Joburg Open and the Alfred Dunhill Championship.

Garrick Higgo
The South African left-hander has won a Sunshine Tour event at GPCC and could slip back into form this week.

Martin Vorster
The promising 19-year-old South African is expected to become a Tour star sooner rather than later.

James Hart Du Preez
The most powerful player on the Sunshine Tour is tempting at big odds of 400-1.

Course overview The Gary Player Country Club, which hosted the Million Dollar Challenge and the Nedbank Challenge from 1981 to 2019, took over as South African Open venue a year ago. The 2020 Nedbank Challenge was cancelled. The Dimension-Data Pro-Am (1996 to 2009), the Nashua Golf Challenge (2007-2011), the Sun City Challenge (2016-2021) and the Blue Label Challenge (2021) are low-grade Sunshine Tour events also staged at this venue. The course is enormous, but a variety of tees can be used to alter the yardage if bad weather makes the full length unplayable. The layout boasts kikuyu fairways and fast, clover-shaped, bentgrass greens surrounded by bunkers, swales and mounds. Some extremely low scores were carded many years ago – Padraig Harrington shot an 11-under-par 61 in 2001 playing with preferred lies, while Ernie Els (25 under par in 1999) and Nick Price (24 under in 1993) have also butchered Player's design. The lengthening of the course, though, has made life tougher for visitors. The layout is at altitude, so the ball flies further than usual

Weather forecast Cloudy, hot and humid, with temperatures reaching 35C, and only gentle breezes. Thunderstorms are forecast on tournament eve and over the weekend