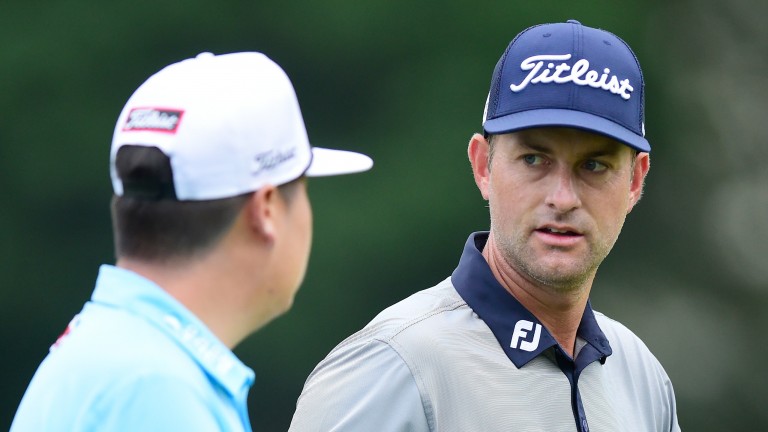 Two closing birdies saw Nick Taylor poke his nose in front on a packed leaderboard at Waialae Country Club for the Sony Open in Hawaii.

The Canadian, a pre-tournament 200-1 chance, carded a second-round 62 to go two shots clear, but five players are tied for second place, with a further eight pursuers only three shots behind. The second leg of the PGA Tour's Hawaii Swing is wide open with 36 holes to play.

Windless skies have made Waialae vulnerable and Taylor has taken advantage with a 12-under-par halfway total. The ante-post market leaders are right on his tail though - Webb Simpson is part of the quintet sharing second spot, while Collin Morikawa is among the group tied for seventh.

Simpson is 7-1 favourite going into the weekend, with Morikawa at 10-1 and the pacesetting Taylor available at the same price. Taylor has won twice on the PGA Tour, most recently a four-shot success in the Pebble Beach Pro-Am last February.

Nick Taylor's Pebble Beach triumph seems like a long time ago - the world has crawled painfully through Covid carnage since - but it was less than a year since he romped to a comfortable victory at that famous venue.

Taylor has missed seven cuts in 15 starts since, failing to better 29th place in any of them, which is why the 32-year-old went off at such juicy prices, but he proved at Pebble Beach that he is not frightened by a place on the leaderboard.

The Sony Open was an ultra-competitive affair before the off and remains wide open with two rounds to go. Branden Grace, Davis Love, Vijay Singh, Brandt Snedeker and Matt Kuchar are a famous quintet who missed the cut, but the vast majority of the fancied runners have progressed to the weekend and a thrilling shootout seems likely in the forecast perfect weather.

Webb Simpson deserves top billing. He came into last week's Sentry Tournament of Champions under a Covid cloud, having gone down with the illness over the Christmas period, but that mid-division run at Kapalua clearly did him good and the former Sawgrass champion will fancy his chances from just two shots off the pace.

Simpson won the Phoenix Open just before lockdown and the RBC Heritage after, so will be full of self-belief down the stretch on Sunday on a Waialae track which suits him greatly.

Given the way Collin Morikawa performed when in with a fantastic winning opportunity going into the final round of the Sentry, it is Simpson who is the more attractive of the market principals at this stage. Simpson (7-1), former Sony champion Russell Henley (12-1), and Hideki Matsuyama (12-1), are the most attractive outright options, with Cameron Smith (33-1) and Lanto Griffin (50-1) capable of making a run from five shots behind at bigger prices.

The final threeball of Taylor, Simpson and Stewart Cink tees off at 10.50pm UK and Ireland time. Simpson is worth backing for that contest, while Henley should have the edge over Vaughn Taylor and Chris Kirk in the penultimate group (10.40pm).