Jayden could be the shape of things to come 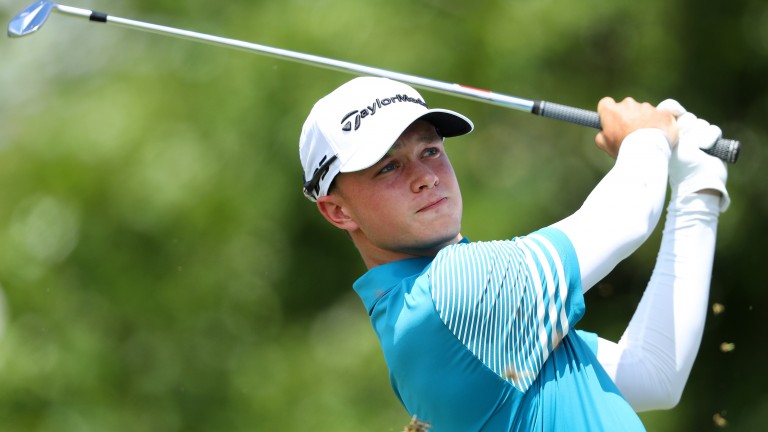 Jayden Trey Schaper is one of several South African youngsters who seem destined for greatness
Warren Little
1 of 1
By Steve Palmer UPDATED 10:58AM, DEC 23 2020

Golf tipping guru Steve Palmer picks three golfers to watch out for on the European Tour in 2021.

South African golf seems set for a golden age and 19-year-old starlet Jayden Trey Schaper should be at the forefront of this success. Schaper's middle name appeared on tee-times at the start of his Sunshine Tour career and has stuck. The teen is apparently keen to become known as just Jayden Schaper, but whatever his moniker, a glorious career appears ahead.

Schaper was South Africa's best amateur before turning professional in January. He is the only player in history to complete the Grand Slam of South African Junior National titles and at the age of 16 he achieved the SA under-19 double of strokeplay and matchplay crowns.

Schaper hits a cut off the tee, oozes control and course-management, and his early forays on the European Tour have been impressive. Sixth place in the SA Open in January was followed by a tie for second in the Alfred Dunhill Championship last month. Expect this great talent to make the most of any sponsors invites which come his way, with the Kenya Open in March looking a particularly attractive opportunity.

Schaper resembles a young Bernhard Langer, with his blond hair and tee-to-green precision, and Langer is doubtless the hero of another emerging force - 25-year-old German Hurly Long.

Four years in the Stateside college system was enough for Long to return to Europe as a force to be reckoned with, and he won the 2019 Pro Golf Tour Order of Merit. Success on that circuit is not to be dismissed given 2020 European Tour Rookie of the Year Sami Valimaki took the same route to the big time. It speaks volumes for the consistency of Long last year that he was able to claim the PGT title despite Valimaki winning four tournaments in the same season.

Long won once, was runner-up three times, third three times, and posted 14 top-ten finishes, earning promotion to the Challenge Tour. A first CT victory came in October and he must be shortlisted whenever he is handed ET starts. Long is the Pebble Beach course-record holder after firing a sensational 61 in 2017 Carmel Cup.

These players can only be followed if they are given opportunities by tournament sponsors. Schaper should be a hot ticket and Long seems a certainty for a place in the two European Tour events in Germany in June, while Casey Jarvis has quickly shown he is bristling with potential and may be somebody sponsors are eager to have in their event.

Jarvis showed in February that he was the real deal, carding a 25-under-par total at Randpark to become the youngest winner in South African Strokeplay Championship history, aged 16 years and six months. That nine-shot triumph underlined the Boksburg boy could be good enough to win pro events in his teens. And he has already recruited a proper caddie in experienced veteran Tiger Lekhulene, Nick Price's former bagman.

Jarvis tied for 25th place in the South African Open at the start of this month and he sounds keen to turn pro. "I'll go to college for a year or so, see how it is, see if I like it," he said. "If I don't, I'll probably come back and turn pro."