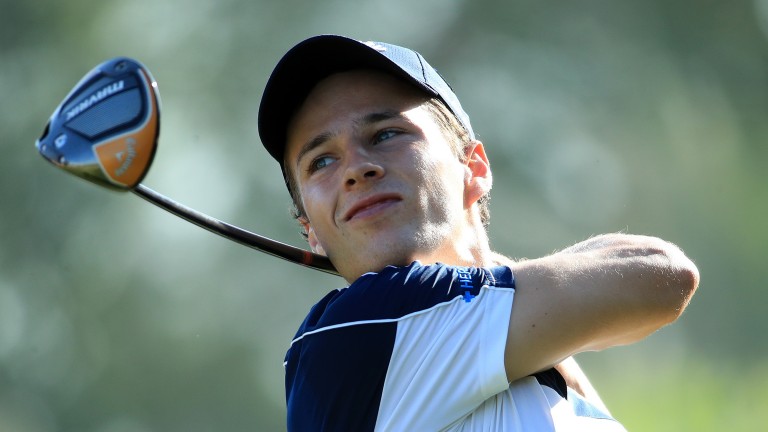 Golf tips, best bets and player analysis for the Joburg Open at Randpark Golf Club on the DP World Tour.

Live on Sky Sports Golf from 10am on Thursday

Dean Burmester is a short-price favourite for the Joburg Open in the wake of carding four consecutive 69s for sixth place in the much higher grade of the DP World Tour Championship last week, but the odds appear skinny.

Burmester cut a tired and dejected figure after the Dubai event, bemoaning his putting and explaining to a South African reporter that there are a few holes at this week's Randpark venue on which he feels uncomfortable. His course record is poor and Burmester can be opposed with players deeper in the betting.

Almost exactly a year ago, Jayden Schaper strongly threatened a European Tour breakthrough in the Alfred Dunhill Championship, a teen terror showcasing his talent to the world. A final-round 75 meant a share of second place - and the South African youngster can go close to a breakthrough again this week.

In January last year - at the Randpark venue being used this week - Schaper finished sixth in the South African Open. In last year's Joburg Open at Randpark, he was 18th, and conditions could suit him even better this time. With a windy weekend forecast, Schaper's neat and tidy game stands him in great stead.

From August onwards, the 20-year-old has excelled on the Sunshine Tour, posting five top-tens in his last eight events, including one runner-up finish, sharing fifth place in the PGA Championship last time out. Schaper could prove the pick of the home contingent.

This low-grade gathering represents an excellent opportunity for Romain Langasque to claim a second European Tour title. The Frenchman, a fantastic amateur before winning quickly on the Challenge Tour, was victorious in the Wales Open last year.

Langasque has got full control of his long-game over recent weeks - driving his ball superbly - and the windy forecast suggests the Joburg Open could provide a decent tee-to-green examination. A solid week on the greens should see the 26-year-old contend.

Langasque was runner-up when Louis Oosthuizen won the South African Open at Randpark. There is no Oosthuizen around to scupper Langasque this time around.

Matthew Jordan has jetted to Joburg and is clearly hungry for a maiden European Tour title. The 25-year-old Wirral lad has been knocking loudly on the door, with sixth place in the Hero Open, fourth in the European Masters and fifth in Portugal. The windy forecast will be music to the ears of a player who typically excels in a breeze.

Jordan has had two solid spins at Randpark (37-23), so can hit the ground running. He has won on the Challenge Tour and should get off the mark on the main circuit at some stage soon.

Complete a six-pronged Joburg attack with three outsiders. Jens Dantorp, like Jordan, relishes windy weather. Most of the 32-year-old Swede's best results have all come in windswept locations - like Scotland, Ireland, the UAE, Oman and on the coast of Portugal. This solid ball-striker has posted nine top-20s this year on the Challenge Tour - a circuit on which he has twice triumphed.

James Hart Du Preez can also make an impact. The rising star can outdrive Wilco Nienaber - they are the two biggest hitters in the game - and Du Preez also has a silky putting touch. He is first for driving distance and putts per GIR on the Sunshine Tour statistics.

Du Preez turned professional in 2018, but suffered a wrist injury in just his third pro start. Three operations over 16 months followed. Just as he was back fit and firing at the end of 2019 - fresh from two top-threes on the Sunshine Tour - Covid arrived. The powerhouse spent 2020 working on his technique with his coach, not worrying about results, and their work is threatening to pay off. Two 11th-place finishes early in the year were followed by sixth spot in a Sunshine Tour event at the end of August. He was 13th at Randpark in the 2018 Sunshine Tour Qualifying School there when still an amateur, and 23rd in the Joburg Open there last year.

Du Preez seems vastly overpriced given his potential, while his compatriot Thriston Lawrence can also be fancied to give a strong account of himself. Lawrence is the only course winner of a professional event in the field. He won the 2018 Sunshine Tour Qualifying School at Randpark by four shots.

Lawrence was a brilliant amateur - he twice won the South African Amateur Championship and is the only South African to have won the Lytham Trophy. He turned pro at the age of 17. He has not succeeded in the paid ranks as expected, with only one Sunshine Tour title at the age of 24, but there is still time for the Mpumalanga man to fulfil his potential. He has four top-six finishes on the Sunshine Tour this year, including last time out - when he closed with a 64.

Marcel Siem
The 41-year-old German was thrilled to win back his Tour card last year. A Challenge Tour victory and 15th place in the Open have revived his career. He won his maiden European Tour title in South Africa in 2004 and is tempting at 66-1 this week.

Martin Vorster
The South African youngster is bursting with potential and Louis Oosthuizen has predicted superstardom for him. He is raw and inexperienced, but won the South African Stroke Play Championship (amateur event) by four shots at Randpark in February.

Wilco Nienaber
The 21-year-old South African giant finished runner-up in the last Joburg Open at Randpark and will expect to be a factor again.

Marcus Helligkilde
The 25-year-old Dane has won three times on the Challenge Tour this year and is riding the crest of a wave. Most of his best work has been done close to home, though, and he lacks experience in South Africa.

Course overview South African Covid regulations will allow 2,000 spectators a day at Randpark. When the Joburg Open and the South African Open had enormous fields (210 or 240 runners), both the Firethorn Course and the Bushwillow Course were used when Randpark hosted, but for a standard field (156 went to post in the last Joburg Open, 144 will do this week) only the Firethorn Course is employed. Randpark was used for the South African Open in 2000 (won by Mathias Gronberg), and the course was not used again until the 2018 Joburg Open (won by Shubhankar Sharma). Louis Oosthuizen reached 18 under par to triumph by six shots in the 2019 South African Open at Randpark. The 2020 South African Open (won by Branden Grace) and the 2020 Joburg Open (won by JB Hansen) are the only other recent European Tour events that have been staged at Randpark. The 2009 and 2010 SAA Invitational - a low-grade Sunshine Tour event - was staged at Randpark, as well as the 2017 and 2018 Sunshine Tour Qualifying School. The long, beautifully manicured, tree-lined Firethorn layout has plenty of water in play. It was extensively remodelled in 2014. There are three par-fives at the Firethorn – the fourth, 12th and 14th. The toughest holes on the front nine are the 503-yard par-four second and the long par-threes (the fifth and eighth), while the back-nine features three long par-fours (the tenth, 16th and 18th). The closing three holes, including the 223-yard par-three 17th, have been described as a “death or glory” stretch. The challenging trio provide much scope for late drama. The leading three players finishing in the top ten and ties who are not already qualified for the Open will earn places for the St Andrews summer showpiece

Weather forecast Cloudy with short showers, gentle breezes and temperatures never bettering 20C over the first two days, then warmer and much windier at the weekend

Type of player suited to the challenge Scores have been low at Randpark in the past, but the easier Bushwillow track (which used to stage 18 holes) is no longer employed, and a windy weekend seems set to make this a tougher test than usual at the Firethorn. Strong ball-strikers and players prepared to grind pars on the more difficult holes should prosper