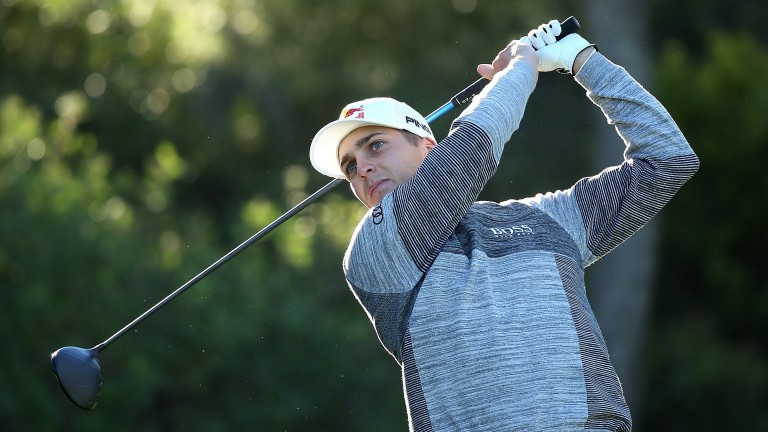 Free golf tips, best bets and player analysis for the Andalucia Masters at Valderrama on the European Tour.

Live on Sky Sports Main Event and Golf from 11am Thursday

Jon Rahm badly let his backers down in last week's Spanish Open - going off 9-4 favourite and finishing in a tie for 17th place before complaining of fatigue - and punters are being offered 3-1 about the world number one for the Andalucia Masters. Rahm putted poorly over the final three rounds of the Spanish Open. And Valderrama takes the driver - his favourite club - out of play on many holes. The course is a test of precision, focus and patience - and the market leader may be found lacking. Others are preferred at much bigger odds for a 72-hole grind in breezy conditions.

Tour veteran Richard Bland is in the form of his life at the age of 48 and can approach missions like Valderrama with confidence. He has been churning out fairways and greens, putting with assurance, rising to 78th in the world rankings.

Since winning the British Masters in May, Bland has finished third in Denmark, fourth in Ireland, 15th in the Scottish Open, third in the Cazoo Classic, fifth in Italy, fourth in the Dunhill Links and ninth in the Spanish Open. He closed with rounds of 64 and 68 in Madrid at the weekend.

If Rahm fails to sparkle again, expect Bland to take advantage. Valderrama is ideal for this accurate operator, who joint-led the US Open at the halfway stage in June.

Neat and tidy Austrian Matthias Schwab is also well equipped for the Valderrama challenge. He has twice finished second on the European Tour, with seven top-fives to his name, but he switched his attentions Stateside in August for the Korn Ferry Tour Finals.

Fourth place in the first of those Korn Ferry events was followed by eighth in the last, meaning he secured a PGA Tour card, before jetting back to Europe to finish 12th in the BMW PGA. A maiden title would come as no surprise on Sunday for an increasingly confident 26-year-old.

Accurate Scot David Law fired a final-round 66 in the BMW PGA, finishing 12th to secure his Tour card for next season. Shaky form in the three weeks before Wentworth was largely down to a bad reaction to his Covid jab, but he is fit and firing again. Law, a European Tour winner in Australia in 2019, was fourth in the Hero Open in August and a Sunday 66 in the Spanish Open has further boosted belief. Law won the 2016 Sotogrande Masters on the Mena Tour an eight-minute drive from Valderrama.

Sunday's playoff combatants, Rafa Cabrera Bello and Adri Arnaus, go to post again. The Spaniard who represents best value, though, is arguably Alejandro Canizares, who uses Valderrama as a practice base and is the touring pro for the club, where he has a solid Tour record (21-7-11-36-16-53-41). He was third in the ISPS HANDA World Invitational in August and third again in the Dutch Open a month ago.

Edoardo Molinari has been performing superbly from tee to green this year, finishing eighth in the British Masters, second in the European Open and fifth in the Italian Open, and a fourth Tour title could be coming on Sunday. A test of precision on a course with small greens is ideal for him.

And Fabrizio Zanotti can also contend. The two-time Tour champion has built a career on straight hitting, and his last three events - 27th in Italy, 20th at Wentworth and a closing 65 for 12th spot in Madrid - indicate the Paraguayan is peaking for Valderrama.

Matthew Fitzpatrick
Another accurate Englishman to consider, but has a gutbusting Ryder Cup knocked his confidence? Two Cup caps have yielded zero points.

When to bet By 7.40am Thursday

Course overview Valderrama is one of the iconic courses of the world. It was the regular venue for the European Tour's traditional season-closer, the Volvo Masters, which it staged from 1988 to 1996, then from 2002 to 2008. The Andalucia Masters was created in 2010 to restore Valderrama to the schedule, then it was played again in 2010, 2011, 2017, 2018, 2019 and 2020, with Sergio Garcia emerging triumphant in three of those last five editions. The 1997 Ryder Cup was played on the course, as well as the 1999 and 2000 WGC-AmEx Championship, and the 2016 Spanish Open. Valderrama, designed by Robert Trent Senior and opened in 1974, is one of the tightest tracks in Europe, with thin, tree-lined fairways flanked by heavy rough. Over-hanging trees can impact approach shots, even from the fairways. Small, undulating greens add to the challenge and one over par for 72 holes was enough to top the leaderboard in the Spanish Open there. There are only three par-fives (fourth, 11th and 17th). The layout is typically in pristine condition

Story of last year Tough conditions meant a two-over-par 72-hole total was enough for John Catlin to take the title, with Martin Kaymer finishing a shot behind

Weather forecast Sunny for the most part, with temperatures in the low 20Cs. Light to moderate breezes, with Thursday and Sunday afternoons expected to provide the strongest wind

Type of player suited to the challenge Valderrama is an extreme test of tee-to-green precision. The penalties for straying off line are severe. The venue is just a few miles from the coast, so flat-calm days are a rarity. Support accurate players with the ability to grind out plenty of pars