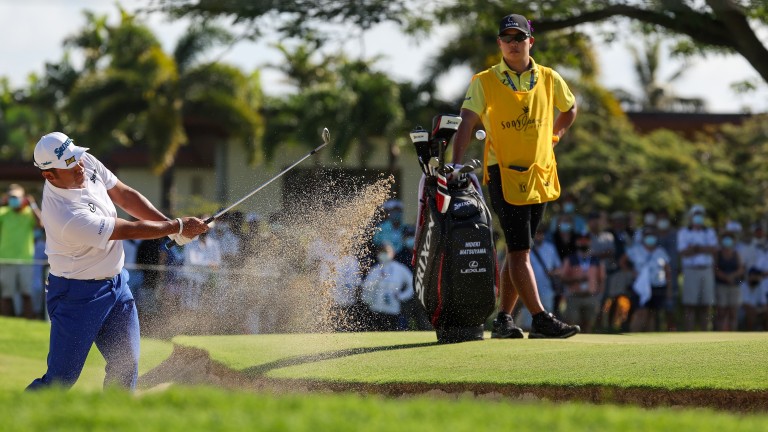 Hideki Matsuyama plays from the bunker in round one of the Sony Open
Gregory Shamus
1 of 1
By Joe Casey UPDATED 11:15AM, JAN 14 2022

Golf tips, best bets and player analysis for the second round of the Sony Open in Hawaii at Waialae on the PGA Tour.

Last year’s Sony Open champion Kevin Na picked up where he left off in the first round of this year’s event, carding a nine-under 61 to top the leaderboard after a day’s play.

The 38-year-old fired an eagle, seven birdies and no bogies in the Hawaiian sunshine as he bids to become the sixth man to win this tournament more than once.

Jim Furyk rolled back the years with a first-round 62 and sits a shot behind Na. The veteran followed three consecutive birdies from the 14th hole onwards with a hole-in-one at the 17th to fire his way up the leaderboard.

Russel Henley is also a shot behind Na, while former winner Patton Kizzire and Seamus Power form part of a group of five that are two strokes back.

Pre-tournament favourite Cameron Smith is tied for 40th place on three under par after the first round.

Last week’s Tournament of Champions was a low-scoring affair which saw Cameron Smith take home the title with a score of 34 under par. If the first round of the Sony Open is anything to go by, a similarly impressive total will be needed to take the win at Waialae.

The second round begins at 5.10pm UK time and in one of the later threeballs, Hideki Matsuyama can get the better of Webb Simpson and Kevin Kisner (10.50pm UK & Ireland time).

Matsuyama showed no signs of ring rust when he returned after a break to finish 13th in last week’s event and his precise iron-play could prove to be vital.

The winner of last year’s Masters should have the edge over Kisner and Simpson, who got off to decent if unspectacular starts.

Like Matsuyama, Seamus Power has also continued his fine 2021 form in the new year. The Irishman won his first PGA Tour event last season when taking the Barbasol Championship. He has also made 13 of his last 15 cuts, with ten top-20 finishes, and is now up to a career-high 63rd in the world rankings.

A top-50 debut and an invite to the Masters is a real possibility for Power and, if he continues his upward trajectory, the sky could be the limit.

Power was 15th at the Tournament of Champions last week and his first-round 63 at the Sony points to him contending again. The 34-year-old can keep up the gallop by going lowest in the 5.40pm threeball against Charles Howell III and Cameron Davis.

FIRST PUBLISHED 11:07AM, JAN 14 2022
Matsuyama showed no signs of ring rust when he returned after a break to finish 13th in last week’s event