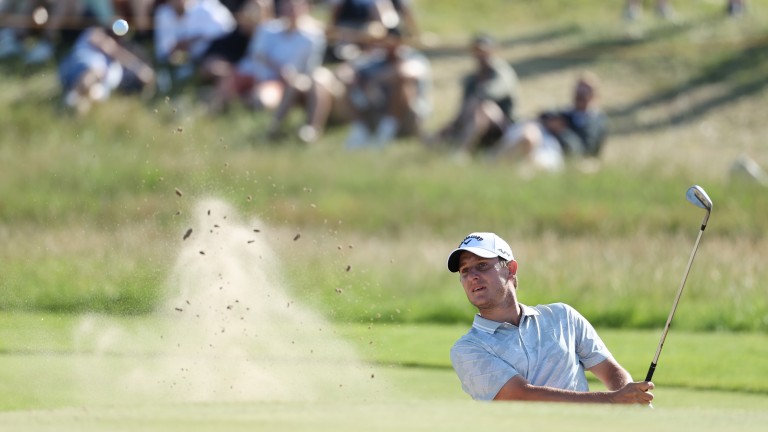 While some of the world's top golfers may be eying Olympic glory in Tokyo next week, much of the PGA Tour focus will be on FedEx Cup points after Collin Morikawa's Open victory in the last Major of the year.

World number two Dustin Johnson heads the field at the 3M Open in Minnesota while South African Louis Oosthuizen will be hoping to win his first US title after finishing third at Royal St George's last week.

But with three weeks to go before the playoffs, time is of the essence for those looking to grab a go at the $15m first prize or even claim their touring rights for next year.

The assembled field should not face a tremendously difficult task at the TPC Twin Cities this week and one player who could flourish is  Emiliano Grillo.

The Argentinian, who tasted victory at the Frys.com Open in 2015, stopped the rot of three missed cuts by finishing 12th in The Open last week in an effort that included a Friday 64 which was the joint-best round of the week.

That should have given his confidence a big boost after that run of three missed weekends and he was in decent nick before that, carding an eighth-placed finish at the Charles Schwab Challenge, and he was also second at the RBC Heritage in April.

That sort of combination could make him a live challenger if he can build on a fine performance last week.

While most of the game's elite were battling it out in Kent for the final Major of the season, Luke List was continuing his good recent form at the Barbasol Championship.

He will probably look back on that tournament as a missed opportunity as he shot a closing 71 to finish two shots outside the playoff between winner Seamus Power and JT Poston.

List finished fifth and that came after he was fourth at the John Deere Classic, in which he posted a second-round 63.

He finished 32nd in this tournament last year but there was evidence of a potentially better effort this time as a second-round 72 blotted his copybook and he finished strongly with consecutive 67s.

The 36-year-old from Seattle is in the sort of nick that suggests he can pick up from where he left off last year.

Hank Lebioda is another player whose recent displays suggest he can enjoy his week in Minnesota.

The Floridian took last week off but has halved his world ranking from 328th to 164th after finishing fifth at the Travelers Championship, fourth at the Rocket Mortgages Classic and eighth at the John Deere.

He was 26th last year and 34th the year before, and a 70 was the highest score he posted in his eight Twin Cities rounds.

Jhonattan Vegas came close to winning the Puerto Rico Open earlier in the year and the Venezuelan has made his mark recently.

The solid driver who ranks fourth in strokes-gained off the tee missed the cut last year but we should see a much improved effort.

In the last two months, he has finished ninth at the Byron Nelson, fell one-shot short at the Palmetto Championship at Congaree and he was 11th last time out at the John Deere, when he closed with a disappointing 70 when he was right in the mix.

Kyle Stanley has been unspectacular recently but take a chance on him making a statement as he just needs to knit four rounds together.

His last few efforts have been mid-field finishes but he has not shot more than 72 in his last 12 rounds and he is a solid enough player to create opportunities.

He can improve greatly on his 32nd last year and is worth chancing for small stakes at a big price.

Dustin Johnson
DJ is understandably a single-figure price after finishing tied for eighth at Royal St George's, which equalled his best performance since winning the Saudi International in February. Withdrew after hitting an opening 78 in this tournament last year.

Sergio Garcia
The former Masters champion has had four straight top-20 finishes and the quality of his ball-striking always deserves respect. Finished with a 66 in Kent on Sunday.

Tony Finau
Third here last year and 15th was a solid Open effort. Difficult to trust though after ten second-placed finishes since his last success at the 2016 Puerto Rico Open.

Louis Oosthuizen
A solid performer as he showed in the first three rounds at Royal St George's. Still hasn't won in America though and needs to recover from another Major near miss.

When to watch Live on Sky Sports Golf from 8.30pm

Time difference Minnesota is six hours behind the UK & Ireland

Course overview TPC Twin Cities, just north of Minneapolis, opened in 2000 and has hosted events on the Champions Tour since 2001.

It was upgraded prior to its PGA Tour debut in 2019 for the first running of this event and moves were made to make the course tougher after the seniors had few problems posting some low scores.

The fairways were narrowed and the rough was allowed to grow but it is still a straightforward challenge for players of this calibre.

Matthew Wolff was 21 under when he won two years ago and last year’s winner Michael Thompson was 19 under. Water is in play on half the holes, while the greens are bentgrass, large and undulating.

There are three par-five holes – the sixth, 12th and 18th – which are all just under 600 yards apiece, and four par threes. There has also been quite a lot of rain in the area over the last few months so the course could play soft.

Story of last year Michael Thompson claimed his first PGA title as he held off a late challenge from Adam Long to win by two shots.

Weather forecast Sunny intervals throughout with little chance of rain and hot, with temperatures averaging 33C.

Type of player suited to the challenge Attacking players carrying a hot putter should thrive on a track where finding greens in regulation is likely to prove an asset.

FIRST PUBLISHED 11:42AM, JUL 20 2021
The Argentinian, who tasted victory at the Frys.com Open in 2015, stopped the rot of three missed cuts by finishing 12th in The Open last week