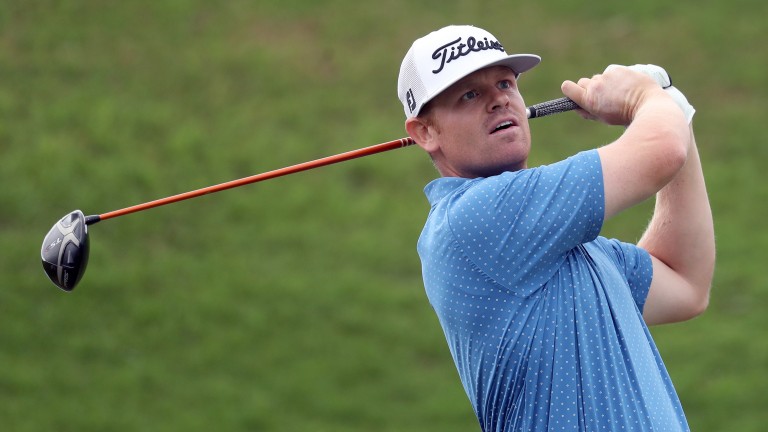 Patrick Fishburn is arguably the most talented player in this field by a significant amount
Getty Images
1 of 1
By Steve Palmer UPDATED 9:48AM, MAR 24 2020

The Mackenzie Q School Prep event in Litchfield Park, Arizona, has provided another fascinating puzzle for golf punters to assess as the coronavirus crisis leaves high-class events on the backburner.

The tournament, which starts at 2.30pm UK and Ireland time on Tuesday, is set to have a field of 80 players unless there are further withdrawals closer to the tee-times.

A lesson learned from the first week of betting on minor golf events during this pandemic is how challenging it is to support a player who is guaranteed to turn up and give his all.

Jamie Donaldson, for example, was a late withdrawal before the Dunham Forest event last week, while Callum Shinkwin and Steven Brown, market principals when arriving for a Clutch Pro Tour one-round shootout at The Shire, did not even manage to complete 18 holes. Shinkwin cited a bad a back, while Brown was not happy with his form, so both headed home early.

There are more uncertainties than normal during these unprecedented times, but the betting community are advised to take a chance on Patrick Fishburn for the Litchfield Park gathering.

He is arguably the most talented player in this field by a significant amount and the 27-year-old powerhouse could make mincemeat of the 6,830-yard, par-72 Gold Course at the Wigwam Golf Resort and Spa this week.

The four par-fives – the longest of which is 590 yards – are well in range for Fishburn. The Utah man has a ball speed of more than 190 miles per hour and rising – the six-foot, four-inch slugger looks good enough to make an impression on the PGA Tour if he finds a way to earn a place.

The late bloomer has been a professional for less than two years, having impressed as an amateur, including an eight-shot triumph in the 2017 Utah Open. There were two reasons why his career was delayed – firstly, because he was a gifted basketball player until a foot injury affected his jumping ability and he switched to golf, then, secondly, because he spent two years serving a voluntary church mission in Tennessee without touching a club.

Fishburn won on the Mackenzie Tour last season and finished fifth on the Order of Merit, earning a Korn Ferry Tour card in the process, so he is clearly making up for lost time.

Korn Ferry form figures of 69-4-MC-29 are solid and this week's event is a considerable drop in grade. It is beneath Fishburn, in truth, but it seems he wants to stay active and pocket some prize money.

The reason some firms are taking Fishburn on is probably the distance he has to cover to get from his home state to Arizona. If he failed to find a flight, he faced an 11-hour drive from his Farr West, Utah, base.

If he gets to Litchfield Park safe and sound he immediately becomes the man to beat. And if he withdraws before the off, stakes will be returned.

With no other events to worry about recently and three rounds to be played at Wigwam Gold (54-hole contest), it is reasonable to expect Fishburn to have set off early and that he will be equipped to produce his best in Arizona.

The main threat to Fishburn – and the rightful favourite if the main fancy should withdraw – is Sky Bet's market leader.

Steven Alker is a New Zealander, but Arizona has become his home, and his Fountain Hills base is only an hour's drive from Litchfield Park.

Alker won twice on the Australasian Tour, then four times on what was then the Web.com Tour, as well as twice on the Canadian Tour.

At the age of 48, he is still a threat on the Korn Ferry Tour, and he seems likely to be in the mix as the final round comes to a close on Thursday evening.

FIRST PUBLISHED 1:25PM, MAR 23 2020
Fishburn won on the Mackenzie Tour last season and finished fifth on the Order of Merit, earning a Korn Ferry Tour card in the process