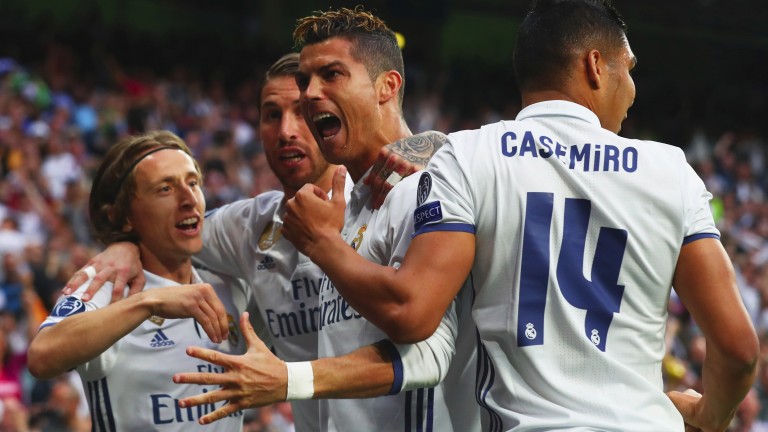 Sometimes it pays to keep things simple so chop your main Golden Boot shortlist down to two: Cristiano Ronaldo and Lionel Messi.

Backing both combined is an option - 2006-07 was the last time one of the deadly duo was not at least joint-top scorer as Kaka finished as the leading marksman.

In the ten seasons since, Ronaldo has won five times and Messi four, while in 2014-15 they dead-heated alongside Neymar.

Of the two superstars preference is for Ronaldo as Real Madrid look a safer pick to go further than Messi's Barcelona and in the past five years he has finished as the leading hitman four times as well as sharing the honour in 2015.

Ten goals used to be deemed more than enough to finish as the top goalscorer but not any more with Messi and Ronaldo taking the figures to levels few others can get anywhere near.

Ronaldo has notched tallies of 12-17-10-16-12 in the past five years and last season ten of his 12 goals came from the quarter-finals onwards against three of Europe's most feared defences in Bayern Munich, Atletico Madrid and Juventus.

The Portuguese perfectionist is 33 in February but seems to be losing none of his hunger to grab headlines and also appears to have accepted he needs to rest sometimes.

Zinedine Zidane has managed Ronaldo perfectly, usually rotating him out of the side for easy La Liga matches and the former Manchester United man is entering the Champions League arena fresh.

No longer the dashing, silky-skilled winger who showboated his way down the Old Trafford touchline, Ronaldo is now a pure out-and-out number nine striker who relishes playing in front of Isco, Toni Kroos and Luka Modric.

The unselfish Karim Benzema is the perfect foil for Ronaldo, who will be looking to go to town against Borussia Dortmund, Tottenham and Apoel in the group stages.

Dortmund and Spurs are both capable of being opened up in this kind of red-hot company whereas Messi's Barcelona are in a group alongside streetwise Juventus.

Messi has been magnificent already this season for Barca, scoring five times in his last two outings against Alaves and Espanyol and, as ever, there is not a great amount to choose between the Argentinian and his great sporting rival.

For those unwilling to go down the combined route, Ronaldo just edges it mainly because he seems to relish the personal glory more than Messi. At Barca Messi may also have to share the goals with Luis Suarez more than Ronaldo does with Benzema.

Talking of sharing the goals around takes us to the Paris St-Germain trio of Edinson Cavani, Neymar and Kylian Mbappe.

They played together for the first time and all scored in PSG's win at Metz on Friday but picking between them for a potential Golden Boot winner is not the easiest task.

Cavani has retained penalty-taking duties, although he is arguably most at risk should coach Unai Emery adopt a more defensive approach for Champions League fixtures.

Mbappe played deeper, like a number ten at Metz, which could harm his chances and for Neymar to be a definite contender it would be nice to see him on penalties.

Gonzalo Higuain is not on spot-kicks at Juventus and Manchester City's front two of Sergio Aguero and Gabriel Jesus may harm each other in this award. Could Pep Guardiola drop one of those for added midfield or defensive protection in Europe? It is at least a possibility.

Robert Lewandowski has an obvious chance leading Bayern Munich's charge. He is a world-class number nine but the Polish striker is still below the scoring standards set by Messi and Ronaldo and the same also applies to Antoine Griezmann at Atletico Madrid.

Who will lift the trophy?

Manchester United's Romelu Lukaku is relatively unproven at this level and despite an easy group the inclusion of Zlatan Ibrahimovic in their Champions League squad would suggest the Swedish talisman is closing in on a return to fitness.

Alvaro Morata has no such issues at Chelsea given Diego Costa has been left off Chelsea's squad list, although a couple of fixtures against Atletico is not ideal for racking up goals.

Roma could also be tough opponents for Chelsea, while Dortmund's Pierre-Emerick Aubameyang and Tottenham's Harry Kane could struggle to go deep in the competition. At least one of them is likely to exit before Christmas given they are in with Real Madrid.

It's worth remembering Dele Alli will miss the first three games because of suspension and former Spurs man Gareth Bale is far from a guaranteed starter at Madrid these days.

Liverpool's Sadio Mane may give punters a nice run and so too could Dries Mertens at Napoli. The Italians always play to attack and a group containing City, Feyenoord and Shakhtar Donetsk screams out goals galore.

Napoli notched 94 times in Serie A last season, scoring 17 more goals than champions Juventus, and Mertens managed 28 of those.

Once an inconsistent winger, Mertens was converted to a false nine by Maurizio Sarri when Gonzalo Higuain's replacement Arkadiusz Milik suffered a long-term injury but there is nothing false about the Belgian's ability to find the net regularly.

However, as a longshot take a punt on Timo Werner.

In years to come we may get to look back and laugh at the time Werner was going off at three-figure prices because he has the potential to achieve greatness.

Fitness permitting, Werner will lead the line for Germany at the World Cup next summer after a blistering start to international football with six goals in eight appearances at the age of just 21 - and that is despite being booed by his own national-team supporters because of his links to controversial Bundesliga outfit Leipzig.

Werner became the youngest player to score twice in a Bundesliga game when at Stuttgart and he has gone through the gears since signing for Leipzig with 24 goals in 34 outings.

Counter-attacking kings Leipzig could be this season's Monaco and that gives Werner at least a shot of the each-way money.