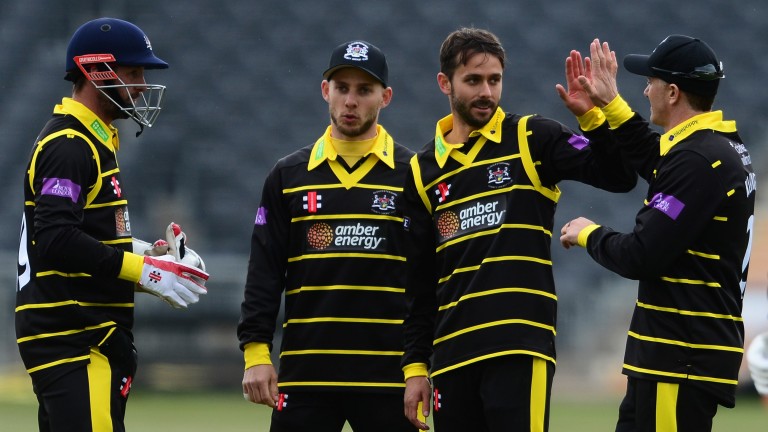 Gloucestershire's Jack Taylor celebrates a wicket against Glamorgan
Harry Trump
1 of 1
By James Milton 8:00PM, MAY 31 2018

North Group leaders Worcestershire are 13-10 outsiders for their trip to Nottinghamshire despite nailing a record chase of 377 to beat Leicestershire in their most recent One-Day Cup assignment.

That made it four wins out of five for Worcestershire but Notts will be bolstered by the return of England opener Alex Hales from the Indian Premier League.

Two other outsiders on the coupon make more appeal with Gloucestershire catching the eye for their derby game at Somerset.

Gloucestershire defeated Glamorgan and Essex in their first two games of the One-Day Cup campaign but a defeat to Surrey at The Oval was followed by rained-off fixtures against Hampshire and Sussex.

Captain Chris Dent is looking on the bright side despite the rain, hoping his team’s light workload in the last week means they will be fresh and ready to fire against their local rivals.

Somerset start the day in second place in the South Group but they have lost three of their last four matches, including a thumping home defeat to Sussex and a Duckworth-Lewis defeat at Kent on Tuesday.

That reverse could have been even more comprehensive but for skipper Lewis Gregory, whose 60 hauled them from 65-5 to 221-9, and they look vulnerable favourites against an underrated Gloucestershire side.

Northamptonshire, a point behind Derbyshire in the North section, are worth a bet with home advantage to clip the Falcons’ wings.

Northants have had a frustrating week, falling five runs short of their target against Durham before a washout at Warwickshire, but before that they had impressed in victories over Lancashire and Notts.

Derbyshire have been involved in some tight contests recently, narrowly beating Durham and Leicestershire before a two-wicket defeat in a rain-reduced clash with Yorkshire last time out.

All those games were at home, however, and Billy Godleman’s men are too short in the betting for an awkward trip to Northants, who tend to save their best efforts for white-ball cricket.

Home skipper Alex Wakely is targeting three wins out of four to reach the knockout stage and the Steelbacks are worth a small bet to claim the points.