Gloucester can keep up Challenge Cup charge to the end

Cherry & Whites expected to fight on after the break 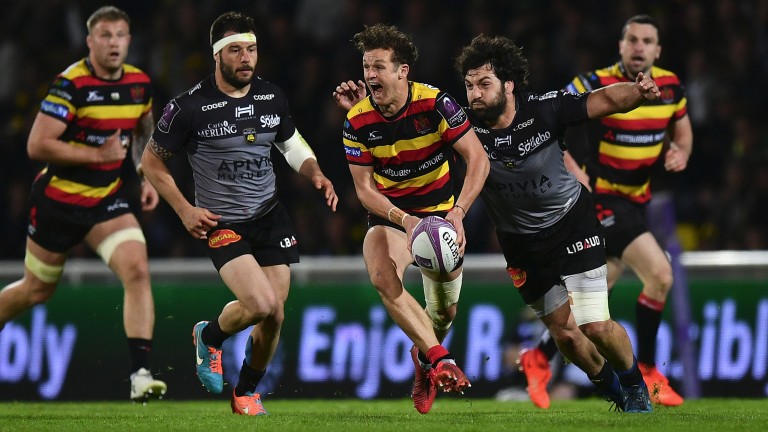 Billy Burns (centre) played a starring role for Gloucester in the Challenge Cup semi-final
Dan Mullan
1 of 1
By Max Oram 7:45PM, MAY 11 2017

This European Challenge Cup final in Edinburgh could be a ding-dong battle with Gloucester and Stade Francais both traditionally at their best when they are attempting to score tries rather than play cagey, defensive rugby.

While 2015 Top 14 winners Stade are arguably the better side and boast two international greats in Sergio Parisse and Will Genia, the Cherry & Whites have shown that they know how to win continental silverware and deserve support in this Murrayfield clash.

Take Gloucester to stay within two points on the second-half handicap and to sneak an 80-minute success after trailing at the break.

In their semi-final at Stade Marcel-Deflandre, Gloucester were sensationally solid in inflicting a first home defeat of the season on shock Top 14 table-toppers La Rochelle. In the quarter-finals, they scored 26 unanswered points to overhaul and streak clear of a bold Cardiff Blues outfit at Kingsholm.

Stade only just kept Bath at bay in their home semi-final after holding an 11-6 interval lead – George Ford missed a penalty to take the game into extra-time. In the quarter-finals, while they stunned Ospreys at the Liberty Stadium despite being reduced to 14 men for the best part of an hour, the decisive try came after an interception of a bizarrely wild midfield pass.

Twelve of this Gloucester 23-man squad featured when they defied a red card to centre Bill Meakes with 15 minutes left to beat Edinburgh 19-13 in the 2015 Challenge Cup final at the Stoop.

The Parisians have lost all four previous European finals they have contested including the 2013 and 2011 Challenge Cup deciders. Defeat to Leinster in Dublin may have been expected but last-gasp heartache to Harlequins in Cardiff wasn’t on the cards.

There is also more at stake for Gloucester on this occasion than Europe’s secondary prize. After finishing ninth in the Premiership, they need to prevail to qualify for next season’s Champions Cup via the playoffs that begin next weekend.

Stade are already in the playoffs as they finished seventh in the Top 14. It would be no surprise if their efforts tailed off in the later stages if they have opened up a sizeable gap or if the Cherry & Whites are in charge.

If it is close Stade could be tempted to shut up shop, whereas Gloucester will keep on charging through electric backs Jonny May and Charlie Sharples or the kicking of Billy Burns and Greig Laidlaw.