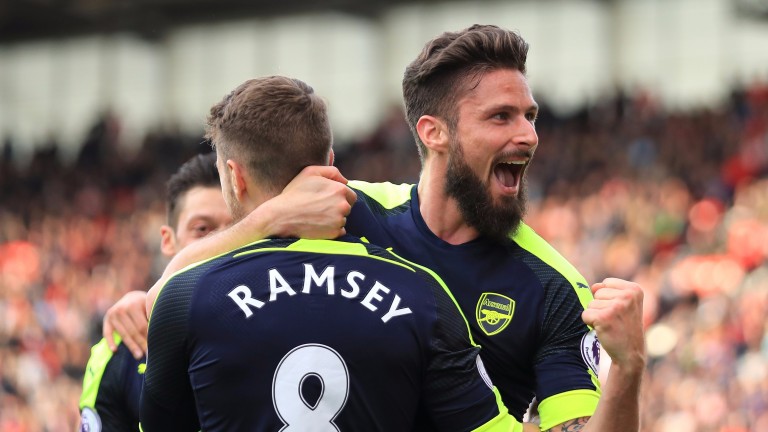 Olivier Giroud scored twice for Arsenal at Stoke on Saturday
Richard Heathcote
1 of 1
By Mark Langdon 8:00PM, MAY 15 2017

Arsenal need help from elsewhere if they are to sneak a Champions League qualification spot but the Gunners should have no trouble at least keeping the pressure on their top-four rivals with a win over relegated Sunderland at the Emirates.

There is a huge gulf between the teams in terms of quality and also in motivation. Arsenal are as short as 1-10 with some bookmakers to beat the beleaguered Black Cats.

The Gunners are also slight favourites giving up 2.5 goals on the handicap and that looks correct despite Sunderland being able to protect themselves in these big away matches.

They lost 2-1 at Manchester City, 1-0 at Tottenham, 2-0 at Liverpool and 3-1 at Manchester United, but that was before they were condemned to life outside the Premier League.

Sunderland won on their last road trip - 2-0 at Hull - but it needed a superb performance from goalkeeper Jordan Pickford to keep the Tigers, now relegated themselves, at bay.

Pickford was beaten twice in the first half of Saturday's 2-0 home reverse to Swansea with a performance that did not suggest they had the spirit to land a massive upset in north London.

David Moyes is short on numbers for the trip and it is likely to be a long and difficult 90 minutes with the Gunners having won their last three Premier League matches by an aggregate 8-1.

Finding worthwhile wagers is not easy but there may be some mileage in a punt on Oliver Giroud to notch the opener, particularly as first-goalscorer favourite Alexis Sanchez is rated doubtful.

Giroud scored three minutes after coming on against Southampton and bagged twice in the 4-1 success at Stoke on Saturday which improved his league minutes-per-goal average to an impressive 92 minutes.

That compares favourably with all of the Premier League's main hotshots. Sanchez's 21 goals have arrived at a rate of one every 146 minutes.

It's not certain that Giroud will start as Danny Welbeck is a different option available to Arsene Wenger, but the French forward would appear the striker best suited to facing Sunderland with the Black Cats set to defend deep.

Giroud scored twice against Sunderland in October in a game in which he featured for only 21 minutes, while he also notched in two of the three meetings between the clubs last season.

Team news
Arsenal
Alexis Sanchez and Laurent Koscielny are doubts, while Santi Cazorla and Alex Oxlade-Chamberlain are out. Kieran Gibbs returns to the squad.

Sunderland
David Moyes has said he may need to put youngsters on the bench as George Honeyman, Victor Anichebe and Jason Denayer are major doubts. Steven Pienaar, Lee Cattermole, Jan Kirchhoff, Paddy McNair and Duncan Watmore are all out.

Key stat
Sunderland have failed to score in six of their last eight away games.