Giro exertions may have taken the edge off Chris Froome 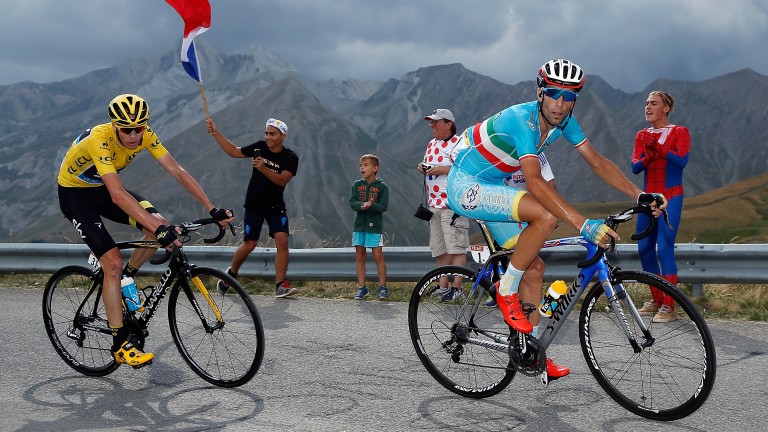 Fatigue could be Chris Froome’s biggest enemy as he bids to make history in the Tour de France over a severely testing route that offers little respite from start to finish.

On paper the four-time winner has the beating of his major rivals again but out on the road it could be a different story.

Stopping him in his tracks will not be easy but is most likely to be accomplished by a rider who has something Froome doesn’t – freshness. The two that best fit the bill, and have the experience of going deep into a difficult three-week Tour, are Vincenzo Nibali, the best each-way bet for this year’s race, and Nairo Quintana.

Froome this week said the 2018 Tour is “the biggest challenge I’ve faced to date” as he attempts in one fell swoop not just to join the elite group who have won five Tours but also to achieve the Giro d’Italia-Tour double in the same season and join Eddy Merckx by winning four grand tours in a row.

The size of the task is immense, even with an extra week between the Giro and Tour this year, and the difficulty is compounded by a tough route that asks questions of the riders all the way from the windy west to the hellish north and on to the climbs of the Alps, Massif Central and Pyrenees.

By tackling that route after a testing Giro in which he had to dig deep to win, Froome has set himself a Herculean challenge. He will deserve his place in history if he is successful but, while there is no denying that he is the best rider in the field and possibly one of the all-time greats, backing him still requires some blind faith.

Froome’s final few days in the Giro were phenomenal but the stats are heavily against him when it comes to completing the coveted Giro-Tour double. Since 2000 no rider who finished in the top three of the Giro has done any better than fifth in the Tour and the eight who went for the double were 84th, 25th, 51st, 31st, fifth, DNF, fifth and 30th, before any subsequent disqualifications.

Another negative is that since 2011 Froome’s best results have come in his first grand tour of the season (five wins and two seconds out of eight) while his second attempts have brought only one win out of six (last year’s Vuelta).

There are plenty of young riders who could make life uncomfortable for Froome and it is tempting to go for a 20-something such as Adam Yates or Romain Bardet, but to varying degrees they could be weakened by the tough opening stages – especially the cobbles of stage nine – the team time-trial on stage three, lack of team support or their own individual time-trialling.

To go deep into week three with a chance is going to require an experienced head as well as fresh legs and Nibali – the 2014 Tour winner and at 33 the same age as Froome – is the best each-way prospect.

He has prepared specifically for this race and, like Froome, has tended to perform best in his first grand tour of the season. Since 2010 his placings in those circumstances are 32311413, which gives him a strong place chance and indicates he will be in the right position if the favourite falters.

Quintana is another fresh rider who has given himself the best possible shot this year. He rode in four consecutive grand tours in 2016-17, culminating in his disappointing Tour 12th last year, and he has deliberately aimed to come here fresh. His placings in his first grand tour of the season in the past five years are 21232 (two of the seconds were behind Froome) and he looked in good climbing form on the mountain stage he won in the Tour de Suisse.

Backing him now is a risk as the first nine days are not in his favour. It is unlikely his odds will be any shorter by the start of the Alpine stages on Tuesday week, unless Froome makes an early exit, and it might be better to wait until then to see how he is placed and how the Movistar team dynamics with Alejandro Valverde and Mikel Landa are working out.

Alpe d’Huez, where Quintana has ridden so well in the past, is the showpiece of that week and he could make a strong move if he is within striking distance.

The more conventional routes to the Tour have been taken by Tour de Suisse winner Richie Porte, the chief market rival to Froome, and the favourite’s teammate Geraint Thomas, who led Team Sky at the Dauphine and won from Yates and Bardet.

Both would be relatively old for a first-time Tour winner - Porte is 33, Thomas 32 - but their preparations could not have been smoother and there is a feeling of untapped potential after years of bad luck.

What we don’t really know is how they will cope with having a target on their back if they end up in front. Porte especially seems to be able to find trouble out of nowhere and it is hard to forget how he was mugged on the road when poised to win last year’s Dauphine. For all his doggedness, it’s hard to get excited by him as second favourite.

Thomas may get his chance to shine only if Froome cracks, which points to the without Froome market as the best option with him.