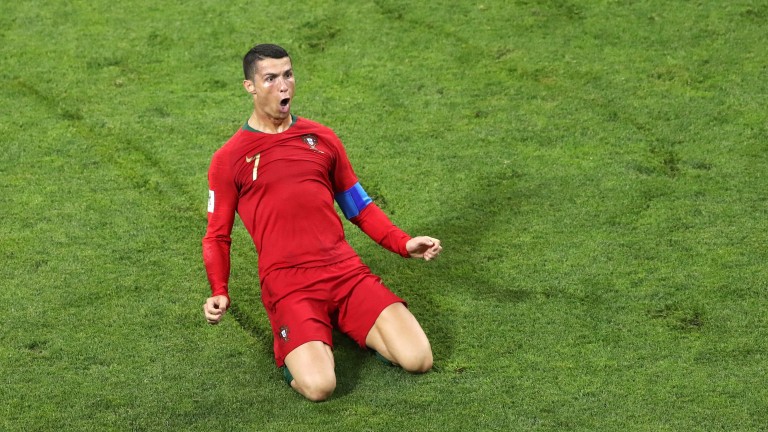 Cristiano Ronaldo lit up the World Cup with a hat-trick in Sochi to earn Portugal a thrilling 3-3 draw against Spain.

Ronaldo was slashed to 2-1 favourite to finish the tournament as the top goalscorer and his late equaliser, a sensational free kick, could be crucial in the battle to finish top of Group B. That strike is 7-1 with Betway to be named as the goal of the tournament.

Spain had looked as if they would win the Iberian derby, fighting back from Ronaldo's early penalty to level through Diego Costa only for the Real Madrid superstar to put Portugal back in front courtesy of an horrendous error from David de Gea.

Costa levelled matters again before a thunderbolt from Nacho appeared to have secured Spain maximum points until Ronaldo's heroics.

Bookmakers were relatively impressed with Spain, cutting them to 11-2 to win the World Cup, and Costa is 8-1 to be the top goalscorer. Portugal are 22-1 to add the World Cup to their European crown.

There was also late drama in Friday's first Group B contest as Aziz Bouhaddouz's injury-time own goal handed Iran a 1-0 win over Morocco to land a 3-1 upset.

World Cup dark horses Uruguay left it late but they managed to start their Group A campaign with a victory after seeing off Egypt 1-0.

Jose Gimenez was the South Americans' hero, heading home after 89 minutes as they finally found a way past Egypt's determined defence.

The result leaves Uruguay level on three points with hosts Russia and there should be another win coming next for them against Saudi Arabia on Wednesday if the Asian side repeat the horrendous performance that saw them lose 5-0 on Thursday.

Uruguay are 4-6 to finish top of the group with Russia 6-4 shots and Oscar Tabarez's men are 1-25 to reach the knockout stages.

It was, however, a frustrating 90 minutes for anyone who backed Luis Suarez or Edinson Cavani in the top goalscorer markets. Suarez missed two golden opportunities and Cavani struck the post. Uruguay remain 28-1 to win the World Cup.

Egypt, who meet Russia on Tuesday, are 7-2 to qualify and they will be desperate for star man Mohamed Salah to recover from his shoulder injury after he stayed on their bench throughout the defeat.

It's a World Cup viewing marathon on Saturday. The action starts at 11am with France versus Australia and will finish just short of 10pm with Croatia against Nigeria. Argentina tackle Iceland and Peru meet Denmark in between.

Bet365 have set their goals line at over/under 9.5 for the four fixtures with both sides at 5-6, while France are 7-4 favourites from 11-4 Argentina to be the highest-scoring nation of the eight involved.

Marcus Rashford has returned to training as England prepare for Monday's fixture against Tunisia with the likely starting 11 of Gareth Southgate's side beginning to take shape.

Assuming there are no late injuries it is expected to be Jordan Pickford in goal with a back three of Kyle Walker, John Stones and Harry Maguire. Kieran Trippier and Ashley Young are tipped for the wing-back roles with Jordan Henderson as the defensive midfielder. Dele Alli and Jesse Lingard are expected to take up more advanced roles behind Raheem Sterling and Harry Kane.

Away from the World Cup, Coral have suspended their betting on Chelsea's next manager after Maurizio Sarri was being backed at 1-6 to replace Antonio Conte at Stamford Bridge.