Giants heading in the right direction

Manning can get offence to be more productive 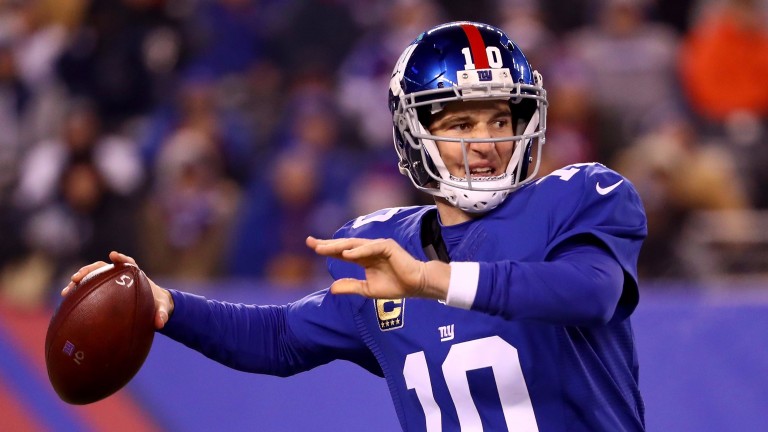 Victories over Dallas and Detroit have left the New York Giants with a 10-4 record and while it looks unlikely they will be able to overhaul the Cowboys and win the NFC East, success over Philadelphia would be enough to claim a playoff spot.

They should be confident of winning, although the Giants have been rocked by an injury to key cornerback Janoris Jenkins.

The back problem suffered by Jenkins against the Lions was not as bad as first feared, although it's unknown when he will return despite concerns he suffered internal injuries proved without foundation.

However, the Giants have coped well with the loss of defensive end Jason Pierre-Paul to a groin problem and rookie corner Eli Apple has been put in some decent performances.

It all adds up to not much being wrong with the Giants defence - no team have scored more than 24 points against them since Week Three - and they have enough weapons on the other side of the ball to step their game up.

Eli Manning has been one of the most practical quarterbacks in the NFL over recent years and he has some excellent weapons at his disposal, not least the flamboyant Odell Beckham, who has scored ten touchdowns in as many games.

There is no hotter wide receiver in the game than Beckham and Sterling Shepard has also been a good option for Manning to utilise.

If their running game can start contributing more assistance, then the Giants could have a big chance of being a surprise package in the post season.

The Eagles suffered a 28-23 defeat to the Giants earlier in the season and have struggled since winning their opening three matches.

Rookie quarterback Carson Wentz was unable to complete a touchdown pass in the 27-26 defeat to Baltimore and they have conceded 26 or more points in each of their last three matches.

Philadelphia's cornerbacks are struggling and that is bad news when facing someone of Beckham's ability.

Consequently, although they have scored a total of just 27 points in their last two matches, the Giants should be able to eclipse a 21.5 point line.

Team news
New York Giants
Cornerback Janoris Jenkins will be missing after suffering a back injury in the win over Detroit, while running back Shane Vereen is sidelined after he aggravated an arm injury.

Philadelphia
Running back Kenjon Barner is out with a hamstring injury but the Eagles should welcome back Darren Sproles to fill the gap.