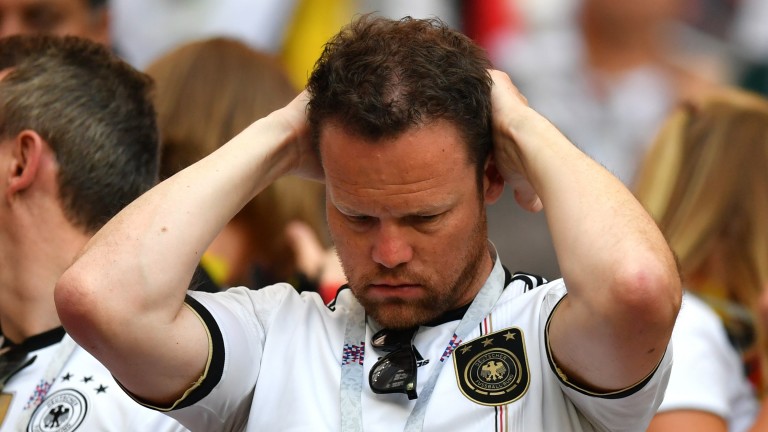 I said last week that I had reservations about Germany's chances in the World Cup and I suppose my worst fears were realised after their dismal performance against Mexico.

I thought the lack of experience and leadership was going to be a problem and so it proved. The Mexicans were outstanding and Germany could have offered no complaints had the scoreline been more comprehensive than 1-0 as their opponents missed plenty of chances.

The danger now is that Joachim Low's team are on a slippery slope and the problems have been going on for weeks.

The row about Mesut Ozil and Ilkay Gundogan meeting the Turkish president has never really gone away and their friendly results were poor. Now they are in a position where they simply have to win against Sweden in Sochi.

It's going to be a tough game. Just ask Italy how difficult it is to beat Sweden. They found that out to their cost when they failed to qualify through the playoffs.

Bookmakers appear to think it is going to be a routine victory for Germany but I would not be backing them at such a short price.

They showed nothing against Mexico. Marcos Reus has to come into consideration because Germany have to make things happen.

Maybe Mario Gomez could be used up front, but there seem to be no obvious solutions to what we witnessed at the Luzhniki Stadium, especially the way it was so easy for Mexico to get at them on the counter-attack.

There are serious problems and I definitely don't think it is out of the question that Germany will fail to get out of the group.

Once things start going badly at a World Cup it is very difficult to get everything back on track. I know they have had meetings to try to get to the bottom of the problems, but there is so much for them to get a grip of and I don't know whether there is enough time to do it.

Either way, I find it hard to believe that they are a team who are capable of winning the World Cup and they will be vulnerable whenever they come up against a good side.

That was definitely the case when they played Mexico and my fear is that it will happen again.

I would be very surprised if Germany get to the semi-finals and they have their work cut out to make any sort of progress.

People have to see in the Sweden game that any issues have been put behind them and that they are capable of launching a strong defence of their world crown. But it's hard to see them doing that.

Surprise packages can be a force in this tournament

Every team have played now and we've seen some of them twice, but I have seen little from those at the top of the market to get excited about.

France have hardly convinced in either of their games, Argentina are in a huge mess after their defeat to Croatia and Brazil also failed to win their opening game. And I have already gone into detail about Germany's catastrophic show against Mexico.

Their awful display took something away from their opponents though and I think El Tri have been one of the most impressive teams we have seen.

They were great going forward and deserved to win by more goals, so I think they have an excellent chance of going far in the tournament.

We saw little from South Korea to get excited about and I should think Juan Carlos Osorio should get the better of them in Rostov.

The other team who really impressed me were England, who thoroughly deserved to beat Tunisia in their opener on Monday.

People might sniff at Tunisia being the 21st-best team in the world but England were able to break them down regularly, even if they were unable to convert many of their chances.

Gareth Southgate's team demonstrated that they can be a huge threat at set-pieces as well and that should bode well for them as they make progress in the tournament.

The manager looks to have everyone pushing in the same direction and that is a huge thing in tournament football,

A united camp produces a united team and an excellent team spirit can prove to be a huge difference, particularly as England look to have an excellent starting 11.

They seem to have turned the corner and it is difficult to imagine them putting in the sort of performance they did when they were shocked by Iceland at the Euros two years ago.

My best bet of the weekend though is to get with Colombia as they take on Poland in Kazan on Sunday.

The Poles were poor in their defeat to Senegal and I don't think they have got much about them.

They are an ageing group and there is too much pressure on Robert Lewandowski. I don't see them going anywhere in the competition.

Colombia, on the other hand, played well against Japan after losing Carlos Sanchez to a red card right at the start of the game.

He was a bit unlucky but they recovered well with only ten men and only conceding a bad goal prevented them from collecting a deserved point. I fancy them strongly to make up for that by winning their second game.

It has been a great tournament so far and I fancy there are still some surprises to come.

Maybe we will see a team such as Croatia or Serbia make a big push and while they are not quite among the big guns, I think England can be confident that they are going to have a successful competition.