Germany can lift the gloom by beating Holland 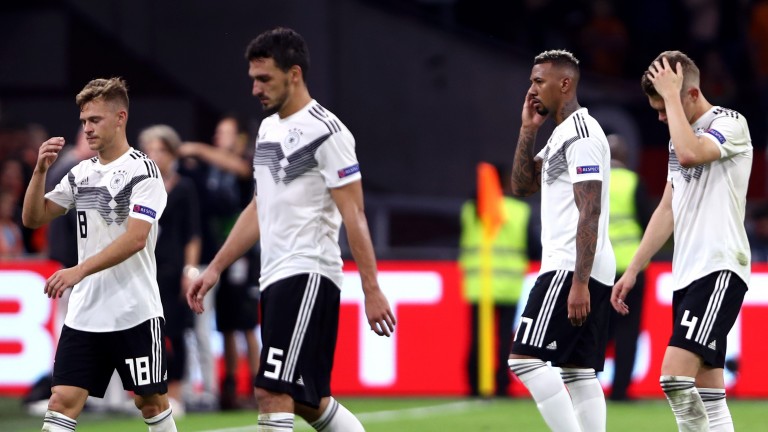 It has been a year to forget for Germany, who have finished bottom of their World Cup and Nations League groups, but they can lift the gloom slightly by beating old rivals Holland in Gelsenkirchen.

Germany have mustered just one point from a possible nine in their Nations League group and were officially relegated to League B after Holland defeated France 2-0 in Rotterdam on Friday.

Holland need a draw to leapfrog France and qualify for next summer's finals – drawing a line under a dismal four years which has seen them fail to reach Euro 2016 and World Cup 2018.

They are making progress under Ronald Koeman and were 3-0 victors over Germany Amsterdam in October.

However, that game was much tighter than the result suggests with the Dutch hanging on to a 1-0 success until late goals from Memphis Depay and Gini Wijnaldum in the 87th and 93rd minutes.

Germany's next priority is to ensure a smooth passage to Euro 2020 and they could do with a confidence boost before qualifying starts in March.

Joachim Low has selected a strong squad as he looks to ease the pressure on himself and his charges took a small step forward by beating Russia 3-0 in Thursday's friendly in Leipzig.

They will be aiming to make it two wins in five days and that is bad news for Holland, whose Nations League hopes are likely to be snuffed out.

Norway are ahead of Bulgaria on goal difference in the race to win their group but lots could change in the final round of matches with the Norwegians travelling to Cyprus and the Bulgarians hosting Slovenia.

Both are odds-on to get victories and will be trying to succeed by as big a margin as possible as they battle to finish at the summit.

Bulgaria's goal difference is just one inferior to Norway's and they look more likely to win by a wide margin.

Slovenia increased the points tally to two with a 1-1 draw at home to Norway on Friday but the result was not enough to prevent relegation to League D.

They have lost both of their away games – going down 2-1 to Cyprus and 1-0 to Norway – and could be heading for defeat in Sofia.