Denmark may struggle to contain them 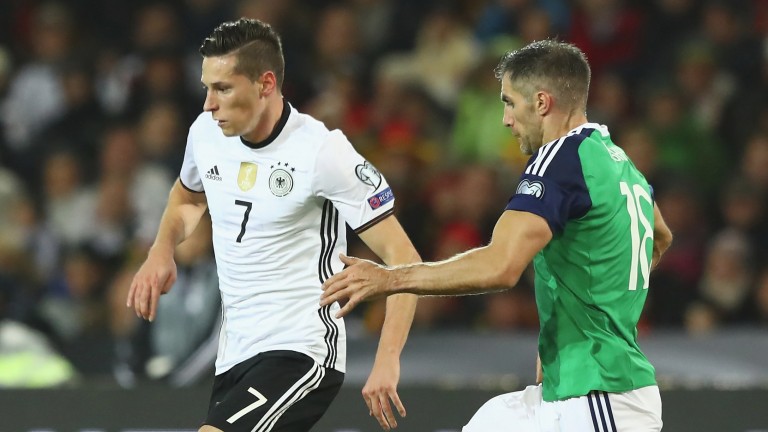 Julian Draxler (left) is just one of the star names in Germany’s exciting young squad
Martin Rose
1 of 1
By Matthew Ireland 8:00PM, JUN 5 2017

Parachuted into the tournament only after original qualifiers Yugoslavia were disqualified, the Danes shocked the continent by beating reigning world champions Germany 2-0 in the final to be crowned kings of Europe.

The Danes mark the 25-year anniversary of that famous triumph with a friendly against the Germans in Brondby on Wednesday but bookmakers believe their chances of replicating their success are slim. The hosts are chalked up as 11-4 outsiders while a victory by the same scoreline as the Euro 92 final is a 20-1 shot.

Those odds accurately reflect the current regression of a Denmark side who have failed to qualify for the last two major international tournaments and have work to do in their quest to secure a place at Russia 2018.

Germany, meanwhile, continue to go from strength-to-strength.
A seemingly endless production line of world-class talent has allowed the side to continually evolve throughout Joachim Low’s 11-year tenure as coach.

Indeed the next few weeks will be a glimpse into the future for Germany supporters as Low has named a youthful squad for this game, Saturday’s qualifier with minnows San Marino and the upcoming Confederations Cup which begins in Russia on June 17.

Those absences perhaps explain why bookmakers have exercised some caution when pricing up the Brondby clash. But this is by no means a weak German outfit with all 23 players regular starters for their club sides in some of Europe’s top domestic leagues.

By resting his star turns, Low has given them the chance to stake their claim to become regulars in the national side and with that incentive, they could shine.