Georgia continue to impress and look worthy of support 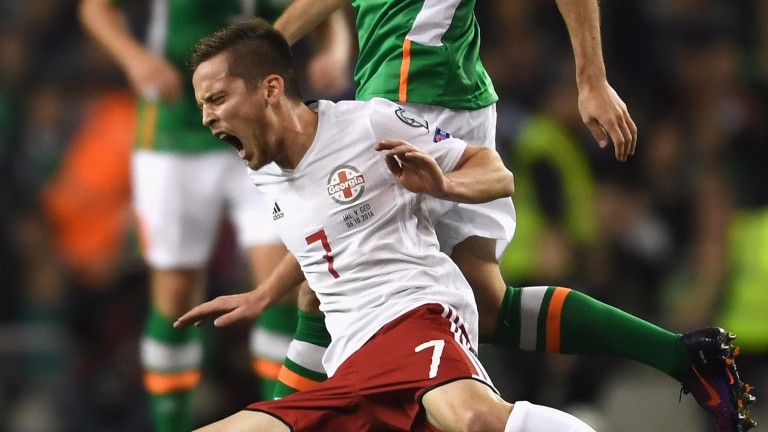 GEORGIA will rarely be considered odds-on shots to win a football match but it could be argued they should be even shorter than 8-15 to beat Moldova in Tbilisi tonight.

Vladimir Weiss must be wondering how his side have only one point on the board from three qualifying matches after playing some excellent stuff in narrow defeats to Austria and Ireland as well as the 1-1 draw in Wales.

Georgia had more shots than Austria and more possession than Ireland but failed to get just rewards for their efforts before sharing the spoils in Cardiff.

Again, Georgia had more shots than Wales and could quite easily have won after Tornike Okriashvili cancelled out Gareth Bale’s opener.

Spartak Moscow midfielder Jano Ananidze looks the pick of the bunch in the Georgia squad, although a number of the players now perform in decent leagues right across Europe.

Moldova have lost their last seven qualifiers and won just one of their last 24 matches. That 1-0 success came against Andorra.

Seventeen of their 26-man squad are based in Moldova and outside of Alexandru Epureanu and Alexandru Gatcan there is hardly any quality in the side.

Moldova have already lost 4-0 away to Wales in this campaign and 3-1 and 3-0 at home to Ireland and Serbia respectively so this is a golden chance for Georgia, who can cover the one-goal Asian handicap line.

Elsewhere there are the usual mismatches in European qualifying with Italy 1-12 to win in Liechtenstein and a Diego Costa-less Spain 1-16 at home to 66-1 outsiders Macedonia.

New boys Kosovo are 20-1 to shock Turkey and 4-11 favourites Ukraine will expect to see off Finland on home soil.

Albania versus Israel is much closer from a betting point of view but is a difficult match to call and perhaps the most interesting clash is Iceland’s trip to Croatia.

Iceland showed with their run to the quarter-finals of Euro 2016 that they can be stubborn opponents so Croatia may not have things all their own way.

Key man Luka Modric has only recently returned from injury for Real Madrid, while fellow midfielder Ivan Rakitic has been below par for Barcelona.

Croatian Ante Cacic has also had to deal with Dejan Lovren’s withdrawal from the squad for personal reasons.

However, Croatia have started well with seven points from their three games.