Improved Gurney could give Bully Boy a fight 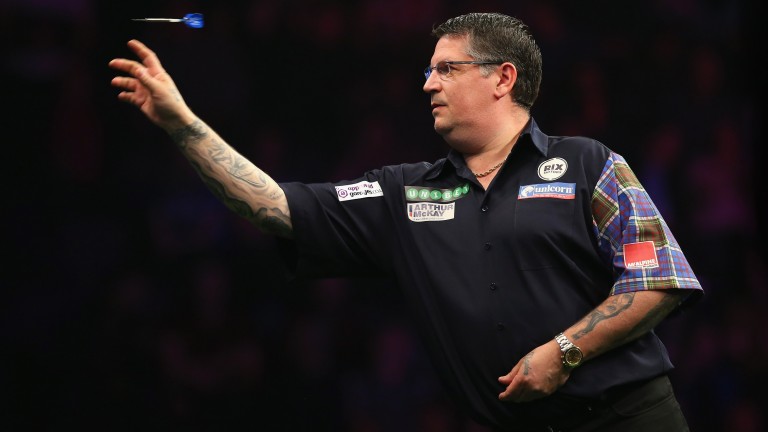 Gary Anderson in action against Simon Whitlock in Manchester
Alex Livesey
1 of 1
By Steve Davies 8:00PM, MAY 2 2018

Just two rounds of the Premier League season remain and there is much to be decided – though there’s only professional pride on the line in the opening contest at the Arena Birmingham.

Simon Whitlock has won just twice since flying out of the blocks with three straight wins. Peter Wright has chalked up only three wins all season, all three against Dutchmen. Both men know their fate.

When they met in Week Eight they produced a 6-6 draw and 13 180s between them, but it’s probably risky to use that as a template for this rematch. Their inconsistency has been their downfall.

That said, Snakebite looks a fairly unappetising odds-on shot – even his floor form recently has been underwhelming – so Whitlock with the draw no bet is preferred.

The Australian is nothing if not gutsy and has to be commended for bouncing back from a string of heavy defeats with a 7-5 win against Gary Anderson last Thursday.

Michael van Gerwen has won the regular league in each of his five appearances and one win from his last two games - maybe less - will see the world number one make it six out of six.

It sounds routine enough yet Van Gerwen’s form has been patchy over recent weeks with just one win in his last four games, and that win – against Michael Smith – was secured with a modest 94 average.

Toeing the oche against Rob Cross, the man who denied him glory at Alexandra Palace at the turn of the year, should encourage Van Gerwen to produce the goods, yet Voltage can definitely give him a game and the world champ is overpriced.

Michael Smith is limping into the playoffs having lost three of his last five, a run of results which seems to have coincided with illness.

Bully Boy won’t use that as an excuse but if he’s not feeling 100 per cent the chances are he’s not going to play at the max, and that has to give Daryl Gurney a better chance than usual. And let’s face it, there’s precious little between these arrowsmiths anyway.

Smith won the previous showdown 7-4 in Week Two. But that was when Superchin was finding his feet and missing his doubles and the Northern Irishman is a different proposition now.

Gurney has lost just three of 12 since that reverse in Cardiff and needs to win to retain any hope of making it to the O2.

Gary Anderson beat Barney 7-4 on this stage 12 months ago and can repeat the dose this evening.

Five-time world champion Barney has given his all in the unlikely pursuit of squeezing into the playoffs but too many ropey efforts either side of Judgement Night proved his undoing.

He’s not renowned for being at his best with nothing to play for (he’d say the same himself) and that opens the door for the Scot, who needs a win to book his last-four spot.

If odds of 4-6 look unappetising, take a chance on the Scot to win and throw most 180s. Anderson has hit 52 maximums during the tournament, 16 more than Van Barneveld has mustered.