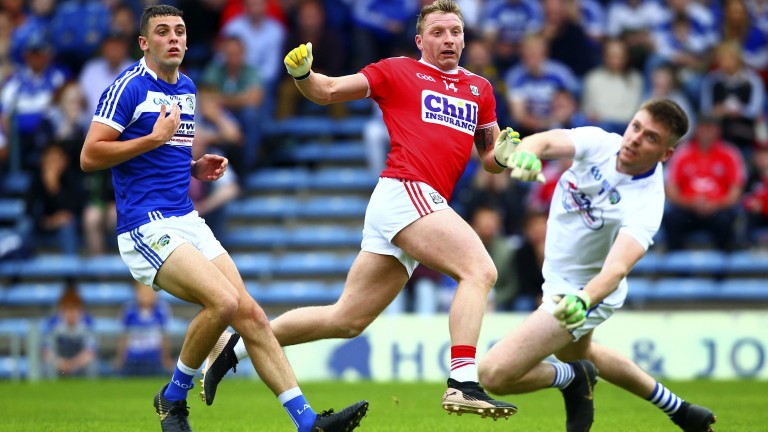 Cork are back in the big time thanks to a surprise sojourn to the Super 8s but it could be the holiday from hell as Dublin have the weapons to destroy the rejuvenated Rebels at Croke Park.

Ronan McCarthy has done a remarkable job at the helm of Cork. It was a job nobody wanted but he has managed to steer them to the last eight and, in doing so, they have played an attractive blend of free-flowing and attacking football. It has been glorious to watch at times.

Brian Hurley and Mark Collins tormented the Laois defence last Saturday but all it took was a diagonal delivery to unlock the code every time. Hurley kicked 2-4 and Collins got 1-8, but one of the deadly duo will be up against John Small in teh Dublin defence and, as he always does, he is sure to teach them some manners.

Jim Gavin will surely deploy a sweeper in front of Hurley and Collins, but with Paul Kerrigan running from deep, it is hard to see Dublin keeping another clean sheet. Cork can at least get one goal.

Dublin netted five times in their landslide success over Louth but they have managed only one goal in their last two games against Kildare and Meath. That is something Gavin will be keen to improve on ahead of tougher tests against the likes of Tyrone.

Paul Mannion has been arguably the best player on show this summer, while Con O’Callaghan will be keen to rediscover his goalscoring touch too.

Cork are shaky at the back, something Kerry exploited in the Munster final, and Dublin could unlock their defence umpteen times.

They have the potential to create at least five decent goal chances.
Dublin should cover the handicap, but with Cork likely to get at least one goal, it is laced with danger.

Therefore, the safer option are the goals markets. The 6-4 about over 3.5 match goals catches the eyes, as does the 7-4 on offer about three or more Dublin goals. The All-Ireland champions are operating at a different level to Cork right now.

Finally, Adam Tyrell leads the way on the scoring front in the championship with 1-31 but Kildare are out and Dean Rock could pass that total should he regain his starting spot for the visit of Cork.

He looked sharp when introduced as a second-half substitute against Meath and it is highly likely Dublin will have five more games in this year’s All-Ireland campaign.

An average of seven points per game, added to what he has already scored, might be enough to see him end the campaign as top dog on the scoring front.

Cormac Costello has been the Dubs' free-taker of late but Rock could start against Cork and he will be on free-taking duty if he does.
In a few weeks, 25-1 could look a very big price about Rock being top scorer.

Roscommon were ridiculed for their performances in the Super 8s last season but Anthony Cunningham is a shrewd coach who could set his side up to mirror Tyrone’s tactics at Dr Hyde Park. Do not expect a scoring spree from either side.

It looked as if Roscommon were just happy to have reached the last eight in 2018 and they were so naive once they got there. They conceded 4-24 to Tyrone in Croke Park at the same stage last year but it could be different 12 months on.

Roscommon were crowned Connacht champions last month and now have an experienced side who are well organised. They are better prepared to frustrate a side such as Tyrone.

It would come as no surprise to see Cunningham deploy Conor Cox and one other forward up top and sacrifice the rest of the team to ensure they stay in the game for longer. He will have seen the videos of how Tyrone dismantled Cavan, a performance that was very unlike Cavan.

Tyrone have still to convince me they are as good as they were in 2018. Their counter-attacking style has brought them to the Super 8s but they could struggle against the top sides. They still lack a Paul Mannion or a Paddy McBrearty.

Given what happened 12 months ago and the fact that they have a raucous home crowd behind them, expect Roscommon to make a decent start and it would come as little surprise to see them lead at half-time.

Don’t forget when these two sides met in the league, Roscommon lead 0-10 to 0-4 at half-time. They could sneak in front at the interval again and odds of 12-5 about that happening look on the generous side.

As for the best bet on the match coupon, that has to be under 19.5 Tyrone points. Whoever gets to 16 points could do enough to take maximum points.