Fulham could be in danger unless they toughen up 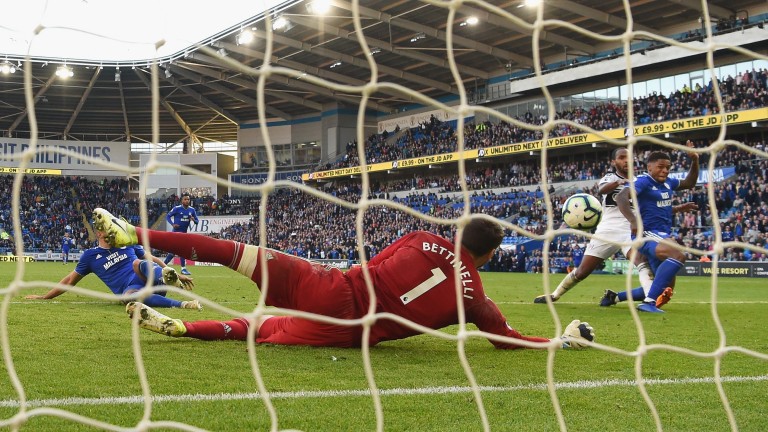 1 Flaky Fulham could be in trouble
Thanks to their attacking ability Fulham have rarely figured when it comes to discussing relegation candidates but if they continue to defend as they have done in recent weeks, they will be at serious risk of a return to the Sky Bet Championship.

When the Cottagers lost 3-0 at Everton and 5-1 at home to Arsenal, they could claim to have been exposed by top-class attacks.

However, they ran out of excuses on Saturday when deservedly losing 4-2 away to Cardiff.

On one crazy afternoon Cardiff scored as many goals as they had done in the previous eight league games and they could have had a few more after winning the shot count 22 to nine.

The result plunged Fulham into the bottom three and they will sink into deeper trouble unless Slavisa Jokanovic can make his team a lot harder to play against.

2 Hornets look a top-half side
Watford were written off before the start of the season and doubts over their ability were beginning to resurface until they won 2-0 at Wolves on Saturday with a hugely impressive performance.

The Hornets had gained just one point from their previous four games but their only heavy defeat was a 4-0 loss at home to Bournemouth when they were reduced to ten men before half-time.

In all of their other eight games they have been competitive and they won at Wolves (the first visiting team to do so this season) despite the absence of injured captain Troy Deeney and suspended defenders Jose Holebas and Christian Kabasele.

In the last three campaigns Watford have subsided after making strong starts. This season could be different and Javi Gracia's side look good for a top-half finish.

3 Baggies are vulnerable favourites
West Brom top the Sky Bet Championship title betting at 5-2 but are by no means good things to reclaim top-flight status.

Albion are the division's top scorers with 31 goals in 13 games and their front two – eight-goal striker Dwight Gayle and seven-goal attacker Jay Rodriguez – form one of the most potent partnerships in the division.

Attacking midfielder Harvey Barnes is also a big influence, notching five goals and providing two assists, but the rest of the team are not functioning smoothly and Albion could have no complaints over their 1-0 loss at Wigan on Saturday.

Darren Moore's side have the worst defensive record among the top ten with 18 goals conceded and will need to tighten up.

4 Rovers pushing for top-flight return
The gap between Sky Bet League One and the Premier League is absolutely massive but Blackburn are doing their best to bridge it in the space of two seasons.

They have added extra quality to the squad who won promotion last season and are up to seventh after Saturday's 2-1 success over Leeds at Ewood Park.

Beating a team of Leeds's stature will have given them huge confidence and sets them up nicely for a pair of tough away games at Swansea and West Brom this week.

However, Blackburn are relishing the big games – they have drawn at home to Aston Villa (1-1) and won at Stoke (3-2) - and shouldn't be discounted in a wide-open promotion race.

5 Sky Blues can go higher
Another club on the up are Coventry, who are progressing nicely since last season's success in the Sky Bet League Two playoffs.

The Sky Blues sold top scorer Mark McNulty to Reading in the summer but have adapted well to the step up and are up to tenth (four points outside the top six) after winning 2-1 at Southend.

Talented winger Jodi Jones, recently recovered from a long-term knee ligament injury, was the match-winner at Roots Hall and could have a key role in lifting Coventry into promotion contention.