Froome out to stamp his authority as contest heats up 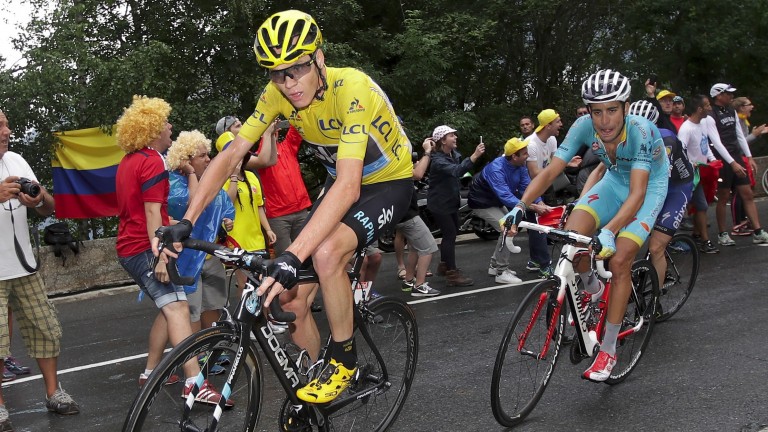 Chris Froome (left) and Fabio Aru could thrive on stage five
Chris Graythen
1 of 1
By Matthew Ireland 9:56AM, JUL 5 2017

Crashes punctuated the run-in to Vittel, with Mark Cavendish the worst affected as he collided with the advertising hoardings with 150m to go having been in contention for the stage win.

World champion Sagan was adjudged to have caused Cavendish's crash and having initially been demoted from second to 115th by race officials and given a 30-second penalty on the general classification, he was later disqualified from the race entirely.

It leaves Frenchman Demare as the new 8-11 favourite for the points jersey, a classification he leads by 43 points from Marcel Kittel

Yellow jersey-holder Geraint Thomas also hit the deck in an earlier crash but he appeared unscathed as he trailed in behind. Thomas does not lose any time because his tumble came inside the final three kilometres.

You will get extremely long odds on a mass finish on stage five as the speedsters take a back seat for one stage at least, and the race for the yellow jersey begins in earnest.

Tour director Christian Prudhomme has promised that this year we will see the GC contenders attacking each other in the early stages of the race and the finish up to the ski station of La Planche des Belles Filles offers the perfect opportunity for the fireworks to begin.

La Planche des Belles Filles holds a special place in the heart of reigning Tour champion Chris Froome. It was there, in 2012, that he took his first Tour stage victory while riding in support of race winner Sir Bradley Wiggins. 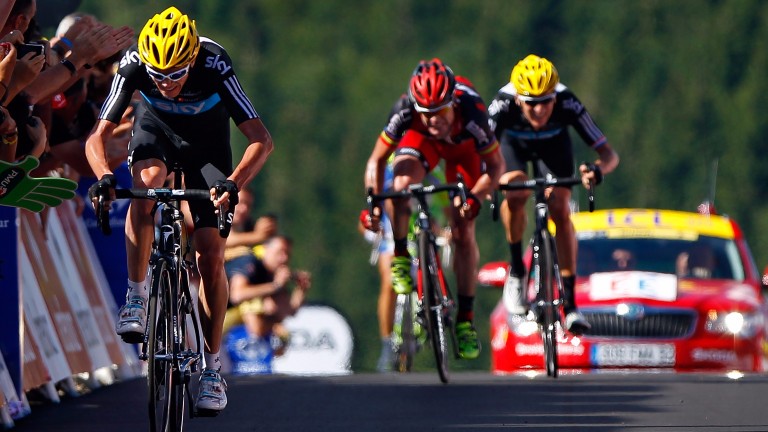 Vincenzo Nibali was the winner when the race last visited three years ago and it stands to reason that with only two other summit finishes for the GC contenders to target, whoever stamps their authority on Wednesday will have a great chance of wearing the yellow jersey on to the Champs-Elysees.

This year's stage doesn't look as difficult as the 2012 or 2014 equivalents with just one other climb, the third-category Cote d'Esmoulieres, so it should be easy enough for the likes of Team Sky to control the race before tackling the arduous 6km ascent to the finish at an unrelenting 8.5 per cent average gradient. A final ramp of 20 per cent offers an unwelcome sting in the tail, too. 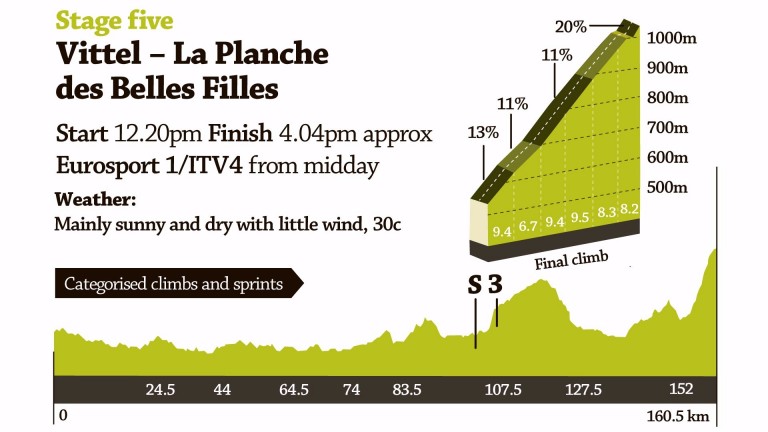 Focusing on the overall contenders looks a prudent play for the stage victory. And from what we've seen so far, Froome and Richie Porte have to be the favourites for individual honours.

Any doubts over Froome's form going into the Tour have been dispelled somewhat by a tremendous opening time trial, while Porte gave a clear indication of his form on the finale of the bumpy stage three on Monday.

With ten, six and four-second bonuses for the first three across the line, going for the stage win is a must for all of Froome's rivals if they are to wrest the initiative from the Brit.

However, time and again Froome has used the first mountain-top finish as the stage to exert his dominance on the race. A return to the scene of his former glory could see him do so once again.

The biggest threat could come from Italian Fabio Aru. Astana's co-leader was imperious in his national road championship ten days ago on a route that featured a climb not too dissimilar to stage five's final test.

A punchy, aggressive climber, he is a viable each-way alternative at 7-1.