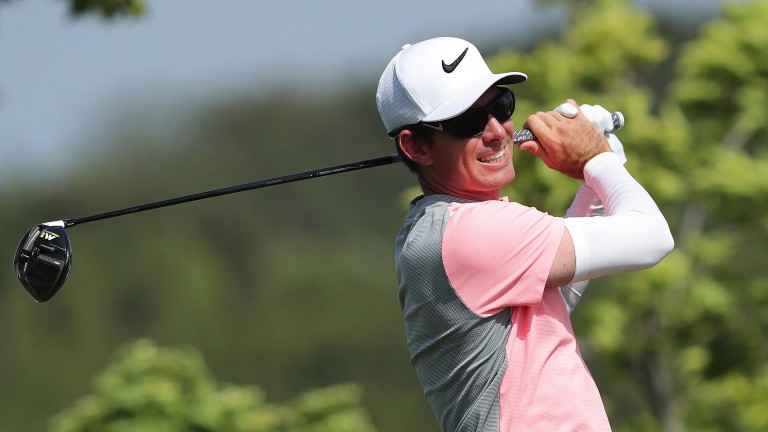 Felipe Aguilar was 150-1 ante-post to win the Lyoness Open in Austria this week, but the Chilean takes a two-shot lead into the final round at Diamond Country Club.

Those pre-tournament quotes about Aguilar were skinny when you consider the miserable form at which he arrived at the event. The leader's 2017 form figures of MC-41-49-47-MC-MC-MC-MC-48-MC-57 did not advertise his chances of success.

Bernd Wiesberger was 9-2 favourite on tournament eve, but he has drifted to 25-1 taking a six-shot deficit into the final round. Aguilar is 23-10 market leader.

The performance of Felipe Aguilar this week is a reminder to golf punters that nothing can be taken for granted. The 42-year-old was one of the easiest names to dismiss from calculations for the Lyoness Open, but the two-time European Tour champion has rediscovered some composure.

Aguilar looked much more likely to miss the cut than contend at Diamond CC given the state of his golf over the last three seasons, but he leads going into round four.

There is no urge whatsoever to support Aguilar at a best-price of 23-10 with 18 holes to play. Several players are close enough to challenge and the last time Aguilar had a chance to win he was abysmal on the final nine of last year's China Open.

Aguilar played the final seven holes of that China Open in two over par, while everyone around him was going birdie crazy, and he surrendered completely with a totally mishit tee shot at the par-three 16th to find water a long way in front of the green.

Much more appealing at double Aguilar's price is Dylan Frittelli, who worked his way up the leaderboard superbly in round three with precision and patience. Frittelli has been impressive this year, particularly when runner-up in the China Open, and a maiden European Tour victory could be coming in the same country where he got off the mark on the Challenge Tour in 2013.

Frittelli's 2017 form entitles him to boss Aguilar in the final threeball. Frittelli starred alongside Jordan Spieth at the University of Texas and it was only a matter of time before he made his presence felt on the European Tour.

Bernd Wiesberger has probably left himself too much to do in round four, meaning the Lyoness Open could turn into a shootout between Frittelli and Sepp Straka. The performance of Straka alongside Wiesberger in the third round was excellent, the youngster keeping his calm in tough circumstances.

Straka has been finding his feet on the Web.com Tour in recent weeks and has been inspired by a return home to compete in Austria. Frittelli and Straka will go out in the final threeball with Aguilar and can be fancied to give the Chilean much to think about.

Frittelli was the headline ante-post selection of Racing Post Sport at 40-1, so punters who followed that advice do not need to get further involved. The 5-1 available heading into round four still carries plenty of juice and is the recommendation for those yet to get involved. The 11-1 Straka is also worth considering.

Final-round threeball punters are pointed towards Matt Wallace, who has been swinging beautifully for the most part this week in a country where he is comfortable. The ever improving Londoner can account for Jurrian Van der Vaart and Ricardo Gonzalez in the 9am UK and Ireland time contest.