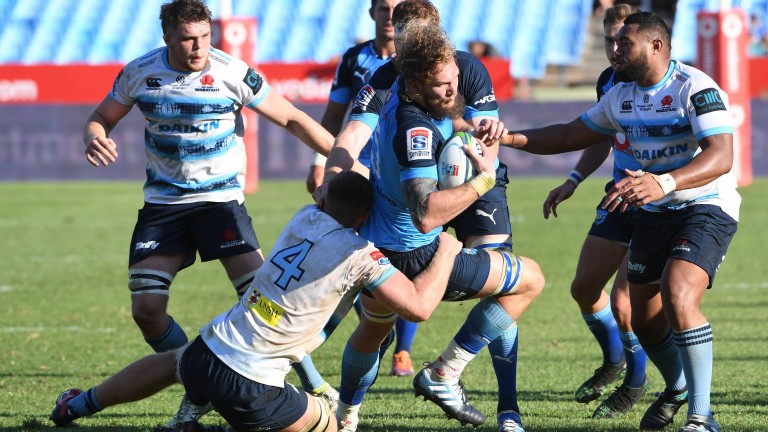 South Africa lock RG Snyman on the charge for the Bulls against the Waratahs
Getty Images
1 of 1
By Max Oram 2:11AM, MAY 10 2019

Back the Bulls with a ten-point start from the champion Crusaders at Loftus Versfeld.

The Pretoria-outfit have won four of their six matches in the South African capital this season, including last week's more comfortable than a 28-21 scoreline suggests success over the Waratahs, and will be desperate to pick up at least a losing bonus, or two, before leaving the Rainbow Nation for their four-game Australasian tour.

The Crusaders will be angry at needing a last-play converted try to draw with the Sharks in Christchurch last week and have won the teams' last two meetings easily but they are far from certain to have eradicated all the indiscipline that marked that display as well as their defeat to the Tahs in Sydney and hard-fought away wins at the Reds and Blues earlier in the campaign.

The Rebels can end their wobble at the top of the Australian Conference with a win by ten points or more over the Reds at AAMI Stadium.

The Melbourne men have lost their last three matches but they won 32-13 in Brisbane in round seven and beat the Queenslanders 45-19 last year when they visited Victoria.

The Rebels responded to a slump at this time last season with three straight wins and have scored 17 tries in four matches in front of their fans this campaign, three of which have been victories.

The Reds have dragged themselves into contention for the playoffs with back-to-back wins over the Sharks and Sunwolves but they have lost by ten points or more at the Bulls and Waratahs on their travels and benefited from some complacency from the Highlanders in their narrow defeat in Dunedin in round one.

There shouldn't be any complacency from the Rebels in this contest.

The Blues look worth a wager with a seven-point start from the Hurricanes at Eden Park.

Leon MacDonald's men have won four of their five matches this season at their Auckland and North Harbour homes and the defeat was by two points to the champion Crusaders in round one.

The Canes, on a run of four straight successes, may well make it eight consecutive wins over the Blues, who have lost three on the spin, but they have not been altogether convincing away from home this campaign. There have been single-figure triumphs in Tokyo, Dunedin and Sydney and a draw in Hamilton against the Chiefs.