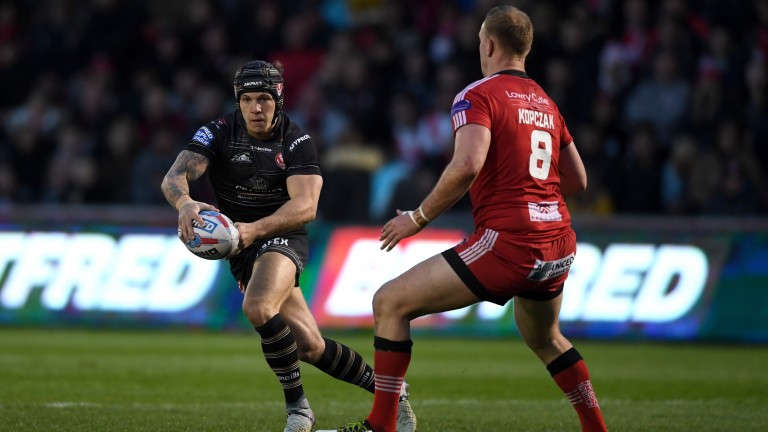 There are less than ten miles between Wigan and St Helens but the distance between the two teams in the Betfred Super League table is much more significant.

Twelve points and nine places separate the sides as the table-topping Saints make the short trip to a packed DW Stadium to take on the struggling Warriors.

Justin Holbrook’s team are looking for a swift double over their neighbours having won 22-12 on the season’s opening night in January.

Saints have been serene ever since with only Catalans lowering the league leaders' colours in the opening ten rounds, while the Warriors have continued to misfire.

Their hopes of springing a surprise have been boosted by the likely return of captain Sean O’Loughlin and fellow forwards Ben Flower and Joe Greenwood, but Wigan are still missing several first-teamers

In that sense, there are shades of the 2003 battle, when an understrength Wigan side recorded an epic win over the old enemy.

It’s difficult to imagine the hosts repeating that feat and Saints, with scrum-half Theo Fages back from a hip problem, can pick up the points.

However, they may well have to work for the win as they did at home and backing the visitors to prevail by a dozen points or fewer may be a prudent ploy. It would have been a winning wager in four of the ten matches played by the Grand Final favourites so far and in the corresponding fixture in 2018.

Saints took the opportunity to open the scoring via a penalty goal in their crucial clash with Warrington a week ago and the first scoring play to be a two-pointer is attractively priced once more.

Similar remarks apply to the Hull derby, which provides the televised starter at lunchtime.

The Black & Whites go into the game buoyed by their second Golden Point victory of the campaign after Marc Sneyd booted a drop goal to beat Catalans 31-30 and it’s 25-1 about extra-time being required again.

Lee Radford’s team ought to have won at Rovers in round one but squandered a 12-point lead and lost 18-16 thanks to a last-gasp Jimmy Keinhorst try.

They shouldn’t be as wasteful again and can cover the six-point handicap against the Robins who limped to an unconvincing Coral Challenge Cup victory over Leigh last time out.

Warrington look worth backing to bounce back from the hiding at Saints by seeing off Salford by more than 14 points at home, but the clash between Leeds and Huddersfield is difficult to call.

The rock-bottom Rhinos are odds-on to pick up only their third league win of the season against the Giants, who receive a four-point buffer on the handicap.

FIRST PUBLISHED 8:05PM, APR 18 2019
Lee Radford?s team ought to have won at Rovers in round one but squandered a 12-point lead