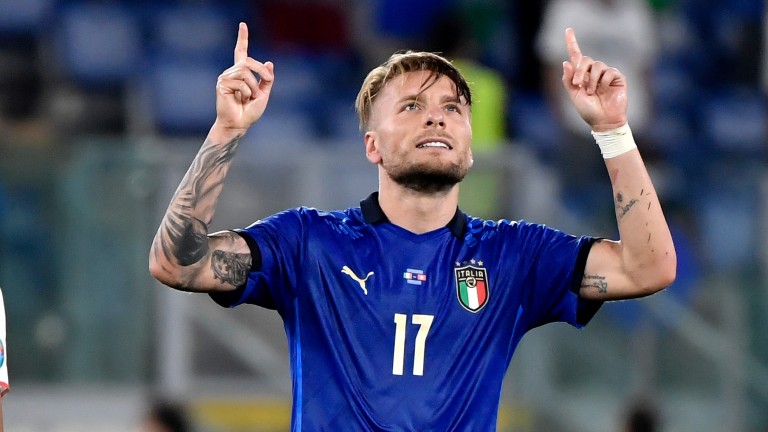 We are down to the final eight at Euro 2020 and there are two quarter-finals taking place on what promises to be a thrilling Friday.

Switzerland and Spain kickstart the action in St Petersburg before European heavyweights Italy and Belgium do battle in Munich.

Bets to be placed by 5pm

Switzerland stunned world champions France to book their place in the quarter-finals and they can make life difficult for Spain, who have plenty to prove defensively after their 5-3 extra-time success over Croatia.

Italy are unbeaten in their last 31 games and look worthy favourites against a Belgium side who were fortunate to beat Portugal - they lost the shot count 23-6 - and may have to contend with injuries to some key midfield players.

The double is available at just over 4-1 with Hills.

Click here to add these selections to your William Hill betslip

Switzerland are competing in the quarter-finals of a major tournament for the first time since the 1954 World Cup and have every chance of toppling Spain, who looked vulnerable at the back in their 5-3 extra-time success over Croatia.

Italy's substitutes won them the game against Austria and strength-in-depth could be the key to success over Belgium, who were showing the strain towards the end of their 1-0 victory over Portugal.

Italy stood out as a team to be feared in the group stage and, if they return to those standards, they should book themselves a slot in the semi-finals. The Azzurri are unbeaten in 31 matches and Belgium may be missing key personnel.

Roberto Mancini may switch up his front three, but star striker Ciro Immobile looks sure to retain his place and at 5-1 looks good value to open the scoring. The Lazio star has struck twice from just three starts at Euro 2020 and could find plenty of space in behind the Red Devils' ageing backline.

Denis Zakaria, who picked up five yellows in the Bundesliga last term, looks set to replace the suspended Granit Xhaka in midfield and his position will be under pressure against a possession-based Spain side. He is a good selection to be shown a card at 12-5 with bet365 given his lack of minutes in the competition so far.

Best bet
Denis Zakaria to be shown a card

The Roma talent has helped Italy keep clean sheets inside 90 minutes in each of their four games and has already been named man of the match in their clashes with Turkey and Austria. Spinazzola also carries a great attacking threat and looks overpriced at 11-1 for Hills to be named man of the match.

Best bet
Leonardo Spinazzola to be man of the match