Fresher Robertson may be the answer to high-quality clash 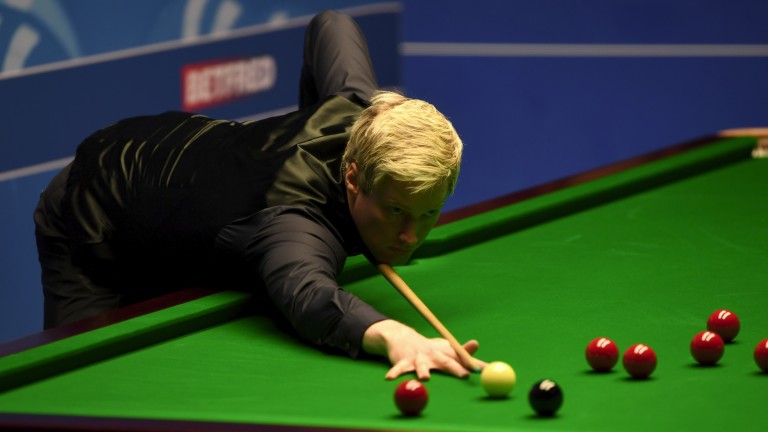 Day nine
BBC and Eurosport, from 10am Sunday

Robertson v Fu 10am
There could be some strong opinions on Neil Robertson‘s Betfred World Championship second-round clash against Marco Fu over the best of 25 frames.

Robertson is shading favouritism in a match in which both players are likely to have their supporters, but bookmakers look to be in roughly the right place on the matchwinner market.

It could be a high-quality clash. Robertson has gone to Sheffield fresh after winning just one minor title early in the campaign, while Fu played some of the best snooker of the season when winning the Coral Scottish Open.

One visit was often enough for Fu in December and as a result the Hong Kong has gone to the Crucible priced much shorter to lift the trophy than would normally be the case.

He was fortunate to edge out Luca Brecel 10-9 in his opener after the Belgian led 7-1, and Fu is unlikely to be able to afford Robertson such a luxurious lead in the last 16.

Robertson's game looked in pretty good order in his 10-4 victory over Noppon Saengkham and if Fu has already done his best work in Glasgow, then the Aussie could be a great price.

Fu will surely have learned a lesson from his opening win, though, and he could play his part in a potential thriller.

But with 2010 world champion Robertson, who was edged out 4-3 by Fu in Glasgow, having the better recent record between the pair it could pay to have a straightforward interest on the ninth seed progressing.

Hawkins v Dott 10am
Barry Hawkins is likely to defeat Graeme Dott but the Kent-based Londoner is too short to offer any match-betting value.

Dott is 8-13 receiving 5.5 frames on the handicap but anyone looking to gain an edge on total frames betting, which is usually achievable, will be disappointed because the line for over 19.5 has been priced out of the market.

Anyway, there's a possibility that Hawkins, who has been making serene progress in longer matches in Sheffield in recent years, could blitz Dott and Coral‘s 1-2 that under 22.5 frames are contested could see support.

But that‘s a short price to take given Dott is a confirmed battler who has played some of the best-quality snooker on his visits to the Crucible.

So, in a match in which the layers appear to have most of the markets covered, the best bet could be to back Hawkins to make at least one century break.

Bet365 go 8-15 about that happening and it‘s a positive that Hawkins made two tons in their first-round meeting at the Crucible in 2009, which Dott won 10-8.