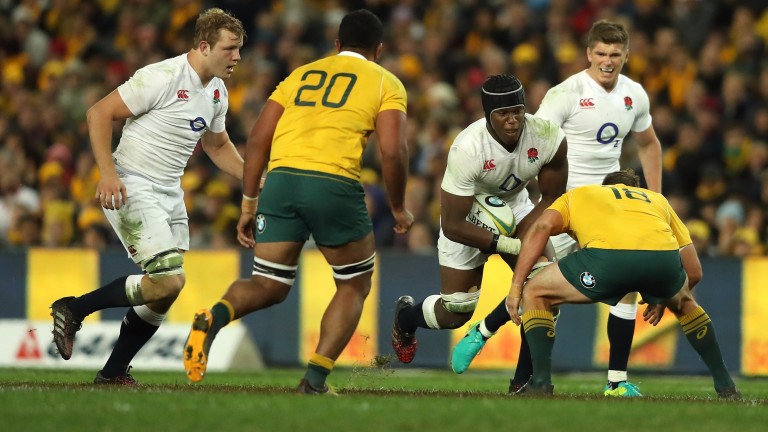 Maro Itoje will swap the second row for flanker against France
David Rogers
1 of 1
By Graham Woods 7:42PM, FEB 3 2017

England coach Eddie Jones has told his team to forget talk about retaining their Six Nations title - they have to go out and win it again, and they start with what could be a testing battle against France.

Les Bleus have been a fading force since reaching the Rugby World Cup final in 2011 and signs of promise in their autumn performances against Australia and New Zealand have to be treated with caution as the Six Nations represents a different style of play.

France coach Guy Noves has spoken of his wish to see more creativity and unpredictability but the French flair of old doesn't seem to have a place in the modern Six Nations, where organised defences and meticulous gameplans have come to dominate.

But one part of their game that remains is the power of their pack and a depleted England may find themselves under the cosh up front.

The scrum will be a key battle area and England are without powerhouse prop Mako Vunipola while loose-head Joe Marler has not played since fracturing a bone in his leg just three weeks ago. It is remarkable that he has made the starting line-up and he faces a massive battle against 21-stone opposite number Uini Antonio.

French teams go into battle at scrum-time with the view that winning a penalty is as good an outcome, maybe even better, as winning quick ball, and if they can get England on the back foot they can bag some early points. Half-backs Baptiste Serin and Camille Lopez are both accomplished kickers while they have the extra weapon of full-back Scott Spedding who can be called up for longer efforts.

The biggest loss for England is Mako's brother, number eight Billy whose rampaging runs contribute so much to England's go-forward. He carried a record 93 times in last year's tournament and is also among the team's busiest tacklers, along with flanker Chris Robshaw, who is also missing.

There are opportunities there for France to get points on the board, but their big problem is going to be fitness. Put simply, England have taken theirs up a gear under Jones while French players look markedly short of it and as the game goes on England should make that difference count.

France are given a double-figure start on the handicap but while the opening exchanges of this game could be tight England should be confident of pulling away. The best handicap wager could be that the visitors are in touch at the break, and it is also worth taking the 2-1 that France open the scoring with a penalty.