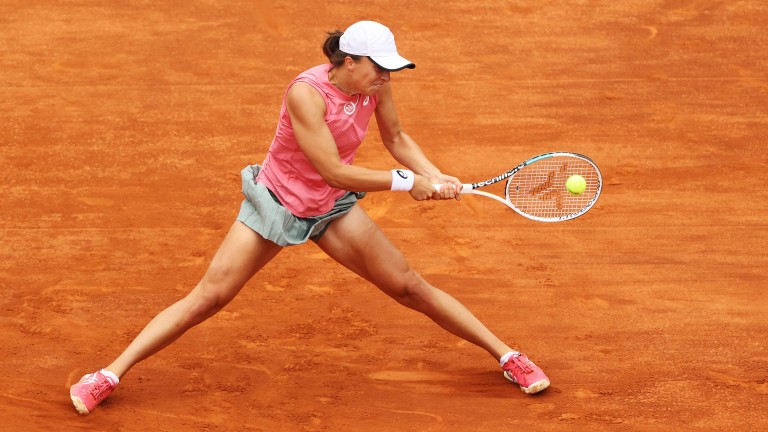 Iga Swiatek was a 100-1 chance when storming to French Open victory last October but the Pole is 3-1 favourite this time.

When assessing the market leaders, punters need to weigh up whether Swiatek could go on to dominate women's clay-court tennis, as has been mooted, or whether world number one and top seed Ashleigh Barty can win a second Roland Garros title in three years.

It's a difficult choice, but handily for outright backers the third and fourth players in the outright betting, Aryna Sabalenka and Naomi Osaka, offer little appeal. Sabalenka is capable but single-figure quotes don't appeal about the Belarusian Grand Slam maiden, while for now at least Osaka doesn't look remotely comfortable on clay.

Garbine Muguruza, the 2016 Roland Garros champion, is an option but the Spaniard seems to require immense focus to prosper on the slow courts, something that seems to come easily for Swiatek when she's in the zone.

And Swiatek rediscovered something like her best form in Rome this month when winning the Italian Open. That should set her up nicely for Paris, although some may say this Slam comes a bit soon after that trophy-winning performance.

Barty is a serious runner too. She's a prolific match-winner, although her only Slam title came in Paris two years ago and the Aussie has fallen short on a number of occasions when closing in on key tournament triumphs.

The best plan of attack could be a modest punt on Swiatek, who looked special when coasting to the title last year without dropping more than five games in a match, and have an each-way interest on outsider Amanda Anisimova.

American Anisimova looks a future Slam champion and her best run in a big-four tournament came in the French Open in 2019 when she lost in a three-set semi-final to Barty.

Anisimova, still only 19, has understandably struggled with her game since the death of her father in August 2019. But after making gradual progress in recent seasons, the 2017 US Open junior champion and 2016 Roland Garros junior finalist may now be ready to go all the way in a pro major.