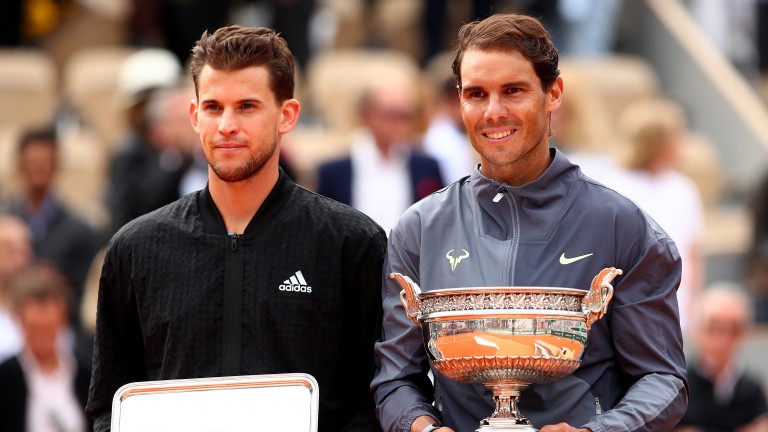 Betway reckon Dominic Thiem is likely to be the next player other than Rafael Nadal to win the French Open
Clive Brunskill
1 of 1
By Adrian Humphries UPDATED 6:35PM, JUN 11 2019

Dominic Thiem is 15-8 with Betway to be the next player other than Rafael Nadal to win the French Open after falling short to the Spanish clay king in the last two Roland Garros singles finals.

Betway reckon the Austrian has a stronger case than world number one Novak Djokovic, who already has one French Open triumph to his name.

The firm cover themselves against big-priced outsiders by quoting an any-other price at 11-4, and with individual quotes for Stan Wawrinka, Alexander Zverev, Roger Federer and Juan Martin del Potro, the best of the rest is probably Stefanos Tsitsipas.

Nadal, who won his 12th French Open crown on Sunday, is 6-1 with Betway not to add to that tally. The firm expect the Majorcan, who broke Margaret Court's record of majors one at a single Grand Slam tournament, to collect two more clay championships before he calls time on his career and, interestingly, Betway reckon Nadal is more likely to win at least three more Roland Garros titles than stop at 12 triumphs.

The best bet on the second day of main-draw action at the Libema Open in Den Bosch this week could be to chance homeland player Thiemo de Bakker with a decent start against Adrian Mannarino.

While Robin Haase has done enough to keep his career ticking over with the occasional title triumph, the 30-year-old De Bakker has without doubt failed to fulfil the potential he showed as a youngster.

The Dutch world number three is ranked a lowly 224th in the world, but there is hope for De Bakker in his Autotron opener as he has won both of his two previous meetings with Mannarino, both on fast courts.

This is their first grass-court clash, but Mannarino has been going through the motions a little this year and a handicap start of 4.5 games to De Bakker may prove generous.