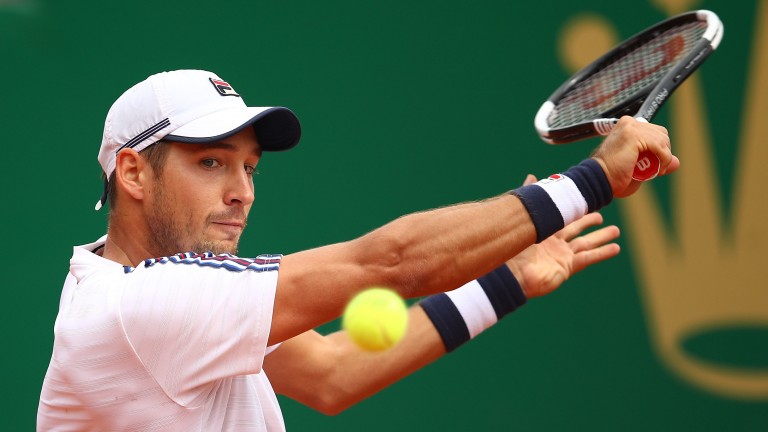 ITV4 & Eurosport, from 10am Tuesday

Dusan Lajovic made his first ATP Tour final on the clay of Monte Carlo last month and a reproduction of that form should be enough for the Serb to beat Thiago Monteiro.

Lajovic won his first five Monte Carlo matches in straight sets - clay-craver Dominic Thiem and Daniil Medvedev were brushed aside - before he found a fired-up Fabio Fognini too hot to handle.

The Serb showed his liking for the slower surface, on which his serve was extremely effective.

His results have taken a dip since with first-round defeats in Estoril, Madrid and Lyon but perhaps that is expected following a career-best effort. A trip to Roland Garros, where he enjoyed his deepest run in a Grand Slam when making the fourth round in 2014, should suit.

However, Monteiro is also playing on his favoured surface and the Brazilian has the ability to make Lajovic work hard.

Monteiro could be sharper in the early exchanges having had to come through three Paris qualifiers and he is still open to plenty of improvement at 24.

The pick of his performances this season came on clay when he claimed the scalps of Albert Ramos-Vinolas, Andrey Rublev and local favourite Jan-Lennard Struff in Munich and the left-hander is unlikely to go down without a fight.

Magda Linette arrives in Paris extremely short on confidence following a string of poor results and that could make her a vulnerable favourite in her opening clash against home hope Chloe Paquet.

At her best Linette would be fully expected to get the job done but just one win in seven clay outings this season suggests she is not finding things easy.

Paquet, therefore, should fancy her chances. A run to the semi-finals in Strasbourg last week, where she dumped out American youngster Sofia Kenin and Australian ace Daria Gavrilova, shows what she can produce when armed with home advantage.

The Frenchwoman upset the odds when given a main draw wildcard at Roland Garros last season, defeating world number 44 Kristyna Pliskova in the opening round, and this looks another winnable opportunity.

Elena Rybakina got the better off Katerina Siniakova on her way to the quarter-finals in Istanbul last month and the Kazakh teenager could be overpriced to repeat the feat on her Grand Slam debut.

Rybakina also defeated Timea Babos and Pauline Parmentier before taking the in-form Barbora Strycova to three sets in Turkey and those performances are hard to ignore.

The 19-year-old is clearly thriving and playing with no fear and three qualifying wins last week, which concluded with an impressive victory over Japan's Nao Hibino, should have put her spot on.