Free-scoring Baggies left frustrated but on track for playoffs 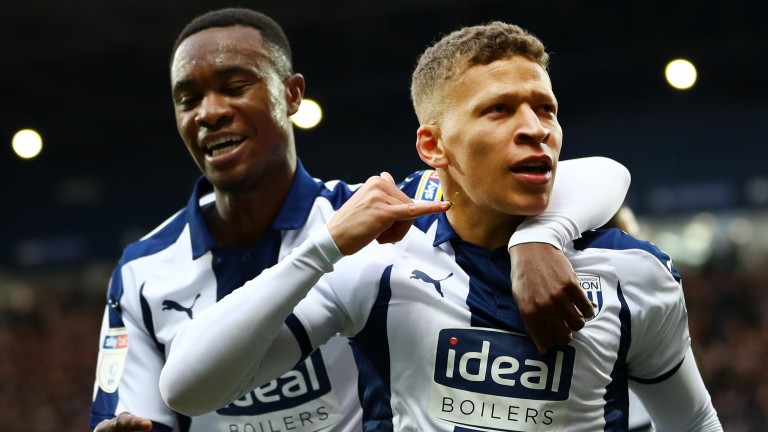 The story of the match

This was a decent Sky Bet Championship clash between two teams with their eyes firmly set on promotion to the Premier League, although neither looked good enough to go up automatically.

West Brom will be the more frustrated side as they failed to build on an excellent start and were maybe a tad unfortunate not to have had more to show than just Dwight Gayle's well-taken goal.

Gayle benefited from an excellent cross from Mason Holgate, the on-loan Everton right-back who looked like Cafu in the early stages as he marauded forward at every opportunity.

As well as setting up Gayle's goal, Holgate also provided a cross from which fellow full-back Kieran Gibbs narrowly missed the target. Hal Robson-Kanu also had an effort wide following a move on the right and Jay Rodriguez shot just wide as the Baggies dominated the opening half-hour.

However, the last 15 minutes belonged to Norwich and Teemu Pukki's header nearly brought the visitors level with their first attempt.

Again, it was West Brom who started the second half the better. Robson-Kanu's shot was tipped over and Gareth Barry brought a decent save from Tim Krul, but in a whirlwind opening Pukki also twice passed up the opportunity to equalise.

Norwich, who just shaded possession, were a threat and finally got their goal on 83 minutes as substitutes Kenny McLean and Jordan Rhodes combined for the striker to pull the Canaries level.

Ultimately, each team scored from their one big chance created chance so the draw did not feel unjust even though Albion possibly could have made more of their bright start.

Darren Moore set West Brom up in an attacking line-up with Robson-Kanu and Gayle flanking hard-working forward Rodriguez in a formation that was essentially 4-1-2-3. Gareth Barry sat deep in midfield with Chris Brunt and particularly Rekeem Harper were asked to do the hard yards.

Both full-backs push on and create width as the wide forwards come inside, while out of possession it became almost a diamond in midfield with Rodriguez dropping deep, pretty much how Manchester United lined up at Spurs on Sunday with Jay-Rod playing the Jesse Lingard role.

Gayle and Robson-Kanu were the counter-attacking threats a la Anthony Martial and Marcus Rashford.

West Brom are the highest scorers in the EFL with 55 goals and their matchday programme cover was a play on the GoodFellas movie poster but instead read GoalFellas with pictures of Rodriguez, Gayle and Matt Phillips, who was a surprise non-runner due to injury.

Crystal Palace in the League Cup are the only side to have stopped Albion from scoring at the Hawthorns this season and they are committed to enterprising play.

Barry lacked pace in his glory days and is certainly not the slimmest, yet his calming influence on the side allows the Baggies to spread the play to full-backs Gibbs and Holgate, who have played in the Premier League.

Holgate was a definite threat, although he lost his head in the latter stages with a couple of rash clearances.

The Baggies have kept three Championship clean sheets - the same number as rock-bottom Ipswich - and that cannot be deemed good enough for a team aiming for automatic promotion.

It is not so much that they display individual weaknesses, but rather that they are exposed by their attacking intent and Gayle, even though he scored, does not look comfortable in a wider starting position.

Maybe Moore could leave out Robson-Kanu and use Gayle through the middle with Rodriguez just behind him, which would allow room for an extra midfielder to add legs to an area that needs boosting following the return of loanee Harvey Barnes to Leicester.

Barnes, with nine goals and six assists, will be a big miss according to the Smethwick End regulars.

Outside the obvious candidates of Gayle (14 Championship goals) and Rodriguez (13), keep a check on flying full-backs Gibbs and Holgate.

View from the camp

Moore said: "As a team we gelled really well. We've drawn but the performance was excellent."

Leeds look like they are going up automatically, but Sheffield United could beat West Brom and Norwich for second, so maybe this fixture will be repeated in the playoffs.

Comeback kings Norwich never know when they are beaten and they once again rescued a result late on.

They are determined to play out from the back in a 4-2-3-1 formation, but Krul's poor distribution hampered City in that department.

Daniel Farke's team should be seen in a better light once midfield kingpin Moritz Leitner returns from injury, and after surprising many with their rise up the Championship, it would now be a shock if they missed out on the top six.