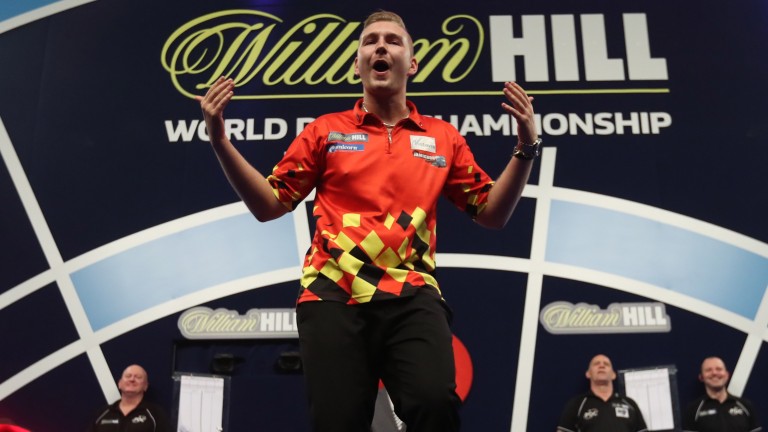 Dimitri van den Bergh could have plenty to celebrate
LAWRENCE LUSTIG
1 of 1
By Aaron Ashley UPDATED 2:09PM, MAY 16 2020

The Home Tour event starts on Friday, April 17 and will be streamed on bookmaker websites and features a host of big names.

Each session starts at 7.30 and will see four stars do battle in nightly round-robin groups which are played over the best-of-nine legs. The 32 group winners will progress through to the next phase.

That last 32 will be eight groups of four and the eight group winners will then play in two separate sections. The top two in each will provide the four-person Championship group which will determine the overall competition winner.

Wifi problems had originally ruled two-time world champion Gary Anderson out of the PDC Home Tour but the Flying Scotsman has fixed his connectivity troubles and is a short-priced favourite to scoop top prize in Saturday's Group 30.

However Anderson, the only player in the quartet making his debut in the event, has been operating below his best for some time now and is no sure thing in a field of this magnitude.

The super Scot is joined by Belgian duo Dimitri van den Bergh and Kim Huybrechts, as well as big-hitting Dutchman Dirk van Duijvenbode. The shorter format - first to five - may expose any rustiness.

Punters should take a chance that Van Den Bergh, a big-game player with world championship quarter-final appearances in two of the last three years, can capitalise.

The DreamMaker has positive head-to-head records against all three of his group rivals and was unfortunate to finished runner-up to Rob Cross in Group 21 just over a week ago.

The Belgian youngster won only one of his three games but recorded a group average of 95.32 - Cross topped the charts with 82.08 - and scaling similar same heights would make him tough to thwart.

Huybrechts will be hopeful after recording a group average of 92.45 when chasing home Stephen Bunting in Group 18.

But the world number 36, who was blown away 5-1 by Bunting, can crumble when tackled by the game's elite and that may prove the case against talented compatriot Van den Bergh, who has won five of the last six meetings.

Dirk van Duijvenbode is a heavy scorer but registered only one win in a group consisting Daniel Larsson, Martin Schindler and Kyle Anderson and this field is a complete class apart.

Not got a William Hill account? Sign up today and get £30 in free bets when you place a £10 bet.