Frankie Dettori can keep on sparkling as racing's undisputed jewel 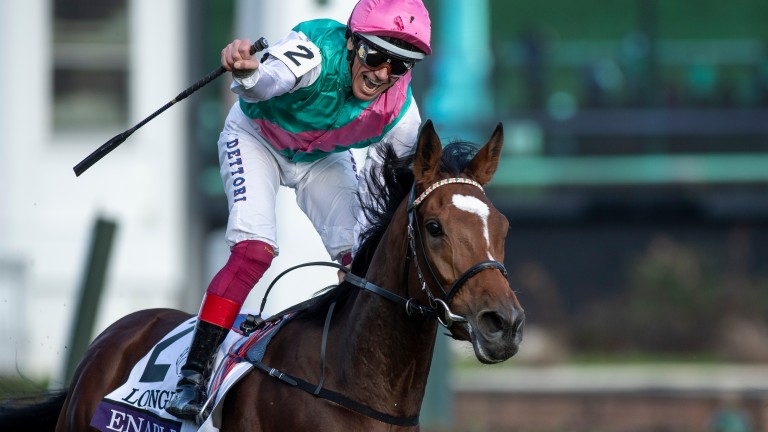 Let’s head back to June 2013. On the final day of the previous month Frankie Dettori had ridden in his first races since serving a six-month drugs ban. Although they took place on a big stage – Epsom on Oaks day – they were unsuccessful and set the tone for what was a gloomily low-key return to riding for British racing’s most charismatic figure.

The days of lucrative retainers and rides aboard the leading challengers in the world’s best races were seemingly behind him and at 42 it looked like the final couple of furlongs of his glorious career would be taking place in racing’s backwaters rather than on the biggest stages.

Dettori, operating as a freelance, managed five winners from 81 rides that month. Royal Ascot, once a guaranteed source of success, saw him manage four seconds but his other 16 rides were unplaced.

But just when it looked like we were going to have to get used to seeing the former lead violinist playing the triangle in the back row of the orchestra his fortunes changed in a trice. Sheikh Joaan, whose burgeoning Al Shaqab operation was making a big impact on European racing, decided he needed a big-name jockey to ride his increasingly powerful string of horses, and while Dettori’s stock may have fallen in the weeks since he resumed riding, his name was still box office.

And so it was that Dettori’s period in the doldrums lasted just one month. He signed a contract and within weeks was riding the likes of Treve. Frankie was back in the big time and in the ensuing five years he has taken his art to new levels. It has been wonderful to witness.

The partnership with Al Shaqab did not last but a far more significant link-up with John Gosden has rendered that almost irrelevant. Gosden has gone from leading trainer to undisputed top of the tree and Dettori has been in the saddle for the vast majority of races that have created that ascent.

Frankie’s mounts in Britain alone have earned more than £20 million in the last five seasons and his beaming smile has lit up winner’s enclosures the world over, most recently on Saturday when he steered Enable to victory in the Breeders’ Cup Turf, after which he reminded us all what a yawning void he will leave when he finally retires with a charming interview that will have given all who watched it a warm glow.

Dettori is racing’s undisputed jewel. As well as continuing to ride so magnificently he engages the public with the sport and makes people’s days whenever he is signing autographs and posing for pictures on the stroll between the weighing room and the paddock.

We now have the tantalising prospect of 2019 being even more successful for the Italian, who has strong Classic prospects with the likes of Too Darn Hot as well as the possibility of further glory on Enable.

When he next climbs on top of Too Darn Hot he will be 48 and we should cherish him while we can. Because when Frankie Dettori stops riding there will not be another like him for a great many years and possibly ever.

Racing benefits from allowing amateur riders to compete, either in races restricted to unpaid pilots or against their professional counterparts, of that there is no dispute. But the existence of a small group of super amateurs in Britain and Ireland is intriguing.

In Britain the most successful amateur on the Flat is Simon Walker, who last week landed the amateur title yet again, meaning he has finished top or joint-top in 11 of the last 15 years.

In Ireland, of course, there are three phenomenally successful amateurs, Patrick Mullins, Jamie Codd and Derek O’Connor, whose names are aboard many of the leading contenders when you look at a race for amateur riders.

The stats regarding Mullins are particularly eyecatching. In the last five years more than half the horses he has ridden, largely due to the number of powerful bumper runners trained by his father Willie, have started either favourite or joint-favourite. Only 46.5 per cent of his mounts have not headed the market.

Codd and O’Connor have also partnered a large number of favourites, often successfully, and one cannot help wondering how these superb jockeys would fare as professionals.

I cannot help but wonder too whether the fact the same small group enjoy a disproportionate amount of success, for which they can only be applauded because they are obviously doing nothing wrong, is what the concept of amateur racing was originally meant for.

On one hand it enables the likes of Sam Waley-Cohen, who has a successful job outside racing, to indulge in their passion, but I would imagine there are plenty of unpaid riders who can’t resist an occasional feeling of frustration that their opportunities to win are restricted because rides aboard horses with decent chances are so often afforded only to the chosen few.

The whip is too big a talking point in racing and the sooner jockeys are prevented from using their stick for persuasion purposes the better.

At Ascot on Champions Day a waitress politely asked me whether the whip hurt horses. I told her it was air-cushioned so therefore it didn’t. I asked her if the use of the whip put her off racing and she said yes it did but she did seem pleased to hear my assurance that it didn’t hurt.

Thankfully, she didn’t come back with the obvious question: why do they have them then? I would have told her jockeys need them for safety purposes in case their horses suddenly change direction in a way that could cause problems, and I genuinely believe it would be ridiculous not to give riders a tool to avoid hazardous situations.

So I think I educated one person about the whip that day, but sadly this idea we can get that message across to everyone who finds the sight of the whip being used distasteful is impossible. What are you going to do? Take the whip into schools and let kids bash each other with them? Place a series of TV ads during Coronation Street? It’s not going to happen.

I’m sick of reading stories about jockeys being banned in big races because they have exceeded the permitted limits. I’m sick of watching demonstrations of whip use like Christophe Soumillon’s deplorable ride on Thunder Snow at Churchill Downs on Saturday.

I’m sick of stewards’ inquiries caused by horses veering away from the whip. And, yes, I’m sick of trying to defend the whip when I’d much rather every racing authority accepted that in the 21st century the public don’t like the idea of horses being whipped to make them go faster, if even it is with something as venomous as a feather.

We have hands and heels races and they look and feel just like races in which the whip is allowed, so why not save the bother of a protracted debate that can only have one outcome and agree and roll out a process that will see jockeys allowed to carry whips only for corrective rather than coercive purposes. Calls for the whip to be banned have generated mystifying levels of hysteria but not a single persuasive counter argument.

And if you take only one thing out of this piece please let it be this: it would be nice if those who vilify advocates of change calmed down and respected the fact we all love the sport and want it to have a successful and vibrant future, and that restricting whip use to safety purposes might actually help that to be possible.

It doesn’t feel right that for Flat racing to continue in its current form a number of jockeys are obliged to weigh less than eight stone, which is the current minimum a horse can carry in Britain.

Jump jockeys have to weigh at least ten stone, and there has to be a strong case for their Flat counterparts being shown some mercy in order that their weight management can be a little less demanding.

Those of us who are no less effective in our jobs if we stuff our faces to our heart’s content can sometimes take for granted the stories we read about jockeys living off a lettuce leaf and a thimble of water while spending hours in the sauna just to be able to ride one in a Lingfield seller, but it must be a truly miserable existence for those riders whose natural weight is much higher.

It would appear the current weights range is set as it is to prevent young horses having to carry burdens that are larger than their immature bodies can safely handle, but their capability to carry jockeys of a certain size must be greater in autumn than in spring yet there is a one-size-fits-all approach both to juveniles and indeed all Flat performers, which does not sound right.

We need to look after jockeys better. They put their bodies on the line every time they are legged up but also bear a heavy mental burden through long journeys, limited opportunities, inadequate riding fees and exposure to social media abuse.

If we can make their lives a little more bearable by sparing them the need to diet so intensely it must be worth looking at what can be done.