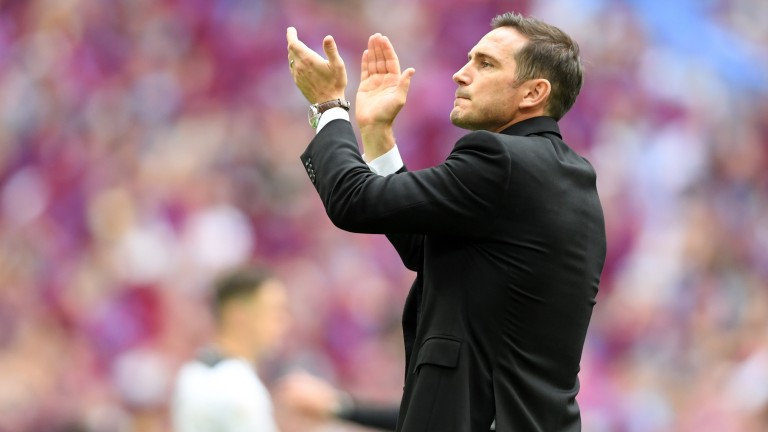 Frank Lampard is just 1-14 to become Chelsea's next manager as the club's record goalscorer closes in on a return to Stamford Bridge.

A deal for the Blues to take Lampard from Derby is reportedly imminent and that would then allow current Chelsea manager Maurizio Sarri to take over at Serie A champions Juventus.

Lampard has had one season in charge of Derby, leading the Rams to sixth in the Sky Bet Championship before they were beaten by Aston Villa in the playoff final.

Hills have pushed Chelsea out to 28-1 to win the Premier League and they also rate John Terry 6-4 to join Lampard as assistant this summer.

Chelsea are currently banned from signing players but their title rivals are expected to be busy before the window closes.

Harry Maguire is 4-7 with Betway to join Manchester City this summer and 2-1 to sign for Manchester United, while the Red Devils are also expected to miss out on another key defensive target in Matthijs de Ligt.

The Dutch centre-back is widely anticipated to leave Ajax and is 4-1 to head to Old Trafford but Paris St-Germain are 1-5 to sign De Ligt, who impressed as the Amsterdammers upset the odds to reach the Champions League semi-finals.

Leicester face a battle to keep Maguire but they appear to be in pole position to make loan star Youri Tielemans' move permanent before the transfer window closes. The Belgian midfielder is 4-7 to join Leicester from Monaco.

Jonathan Woodgate has been confirmed as Middlesbrough's manager. Boro are 9-2 to gain promotion to the Premier League next season.