Switzerland should suffer against class of the French 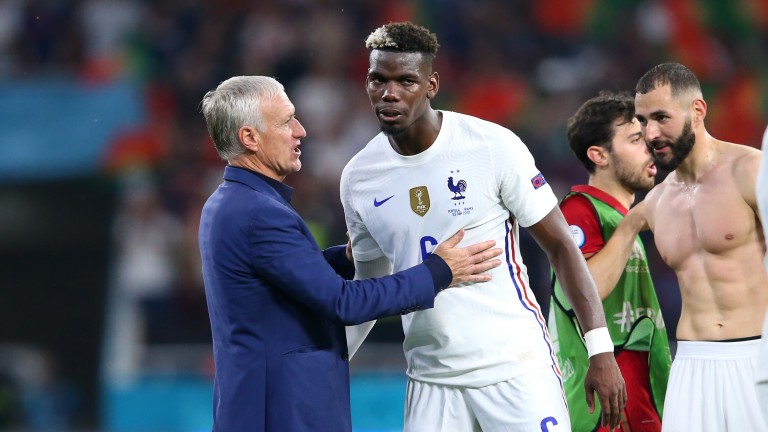 Free Euro 2020 football tips, best bets and analysis for France v Switzerland in the round of 16 on Monday.

France have become very effective at grinding out results at major tournaments and should have too much quality for Switzerland, who were far from convincing in the group stage.

France
Ousmane Demebele faces several months on the sidelines, while Lucas Digne and Marcus Thuram are also out of this tie. Lucas Hernandez and Thomas Lemar have returned to training. Jules Kounde is doubtful.

Switzerland
Switzerland have not reported any injury concerns.

France's dubious reward for winning the group of death was a place in the tougher half of the Euro 2020 draw but they should have few problems seeing off Switzerland in their round of 16 clash in Bucharest.

There has been plenty of criticism of Didier Deschamps' side, who followed up an impressive 1-0 success over Germany with draws against Hungary and Portugal, but they still finished top of the toughest section and approach the knockout stages knowing they have scope to improve.

They made a similarly unconvincing start at the 2018 World Cup where they followed up narrow group stage wins over Australia and Peru with a goalless bore draw against Denmark.

However, when the standard of opponent increased sharply they raised the level of performance with a 4-3 success over Argentina which stood out as the game of the tournament.

France had to show off their attacking prowess against Argentina but they are unlikely be to tested in the same way by Switzerland, who are a functional, no-frills outfit.

In seven years at the Swiss helm, Vladimir Petkovic has established them as a tough side to play against and enjoyed a few magic moments including a 5-2 Nations League triumph at home to Belgium in November 2018

However, his team have consistently failed to make waves at major tournaments and flunked another big test at Euro 2020 with their 3-0 defeat to Italy.

Petkovic got a decent response when the Swiss triumphed 3-1 over Turkey but it is hard to see his side causing serious problems for France, who could probably win the game in second gear.

Switzerland have lacked a top-quality striker throughout Petkovic's reign and while front-men Haris Seferovic and Breel Embolo have looked lively this summer, they lack the killer instinct required at the highest level.

Petkovic's side can pose a threat from set-pieces thanks to the decent dead ball deliveries from Xherdan Shaqiri and Ricardo Rodriguez, but France are not usually the sort of side to give away cheap goals.

Critics of Deschamps overlook the fact that he has got a bunch of talented players to seemingly enjoy performing the more mundane tasks and it is that spirit and togetherness, allied to a large dollop of ability, which makes them so tough to beat.

The wait for a perfect France performance may extend beyond the end of the tournament, let alone the round of 16, but they are worthy favourites to lift the trophy and should advance with the minimum of fuss.

France to win
Back-to-back draws have been a reality check for the tournament favourites but they have huge potential and should advance to the quarter-finals without the need for extra-time.

Under four goals
France have not scored more than twice in any of their six competitive games this year and won't need to go goal crazy against the Swiss, who are very limited in attack.

Karim Benzema to score anytime
Karim Benzema's two goals against Portugal were his first for the national team since 2015 and they could be just the start for the Real Madrid man, who netted 23 times in La Liga last term.

FIRST PUBLISHED 4:11PM, JUN 27 2021
Critics of Deschamps overlook the fact that he has got a bunch of talented players to seemingly enjoy performing the more mundane tasks