France still have fight left in them for final Test

Damian McKenzie needs to find feet at ten for All Blacks 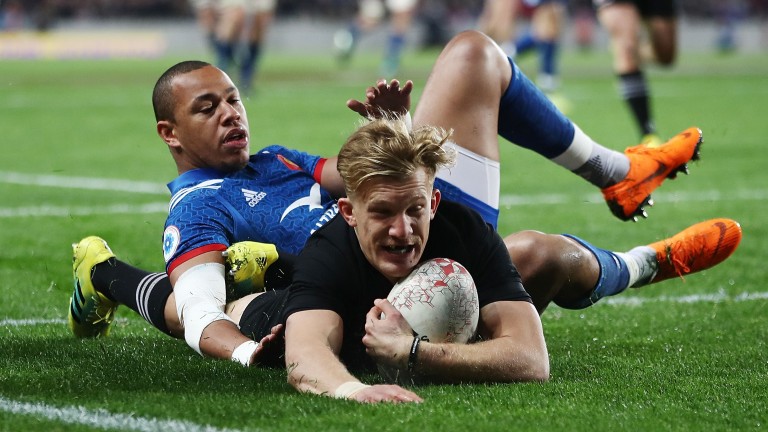 After a heavy defeat in the first Test against New Zealand, France dug deep in the second despite being reduced to 14 men and they may not be blown away in their final showdown of the series in Dunedin.

The handicap is again in the 20s and in the past it might have been tempting to think a France side with nothing to play for would offer little resistance.

But Les Bleus have shown more steel this year, and while a New Zealand side showing a few changes should still come out on top, the victory looks likely to be comfortable rather than convincing.

The big change for the All Blacks is at fly-half, where Beauden Barrett is sidelined after picking up a concussion last week and is replaced by Damien McKenzie, who makes his first start in the number ten shirt.

McKenzie took Barrett's place after little more than ten minutes last week and was criticised in some quarters for his game management as New Zealand struggled to break down a depleted but determined France side.

In other changes, flanker Shannon Frizell makes his debut while another uncapped player, Jackson Hemopo, is included on the bench.

France have a new centre pairing of Wesley Fofana and Remi Lamerat, and scrum-half Morgan Parra wears the captain's armband in place of Mathieu Bastareaud.

Otherwise Les Bleus are unchanged, with the same pack who lined up in Wellington, and Jacques Brunel's decision to keep faith with his side suggests he and the players feel there is more they can give.

New Zealand head coach Steve Hansen seemed to take that approach in the second Test, when he named an unchanged team despite a landslide 52-11 victory the week before, and this final encounter looks to be the one when a different approach is taken.