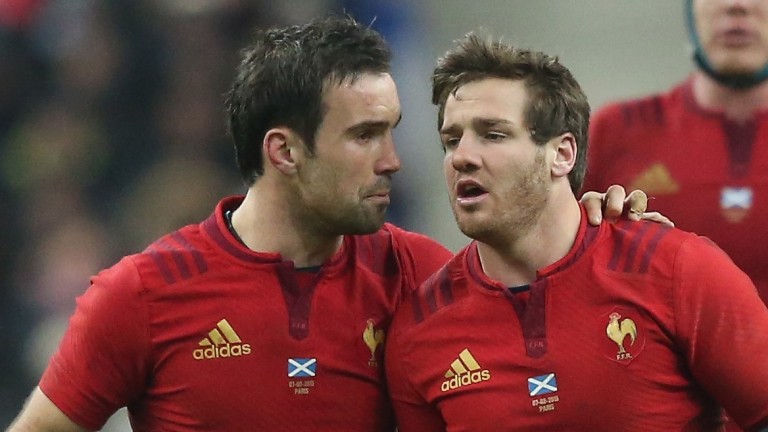 It is a question fans of France have been arguing over for longer than most can remember: which combination of half-backs should carry the hopes of Les Bleus?

Yet when you consider that almost 50,000 votes have been cast on the subject in a survey conducted by the website Rugbyrama, you get some idea of just how close the scrutiny will be when Jacques Brunel announces his nine and ten for the opening match against Wales.

The attritional nature of modern rugby - especially in the crash-bang world of France’s Top 14 - means consistency of selection is a rare luxury for most national team selectors.

But for once Brunel looks like having most of his preferred choices available to him in those two playmaking positions, and the return to form and fitness of Morgan Parra means he has an even greater array of possibilities, since the Clermont scrum-half can also play at ten if required.

Even assuming Brunel doesn’t succumb to the temptation of playing the 30-year-old outside either Baptiste Serin or Antoine Dupont, the choice of six half-backs in total means plenty of observers will think the man in charge has got it wrong (for what it’s worth, those polled online favour Parra and clubmate Camille Lopez).

If only on a personal note, Parra will be hoping to feature in a first Six Nations campaign since 2015 after eve-of-tournament injury cost him his place 12 months ago.

Not that the choice of nine-ten charniere (hinge) alone will suddenly transform Brunel’s men from Europe’s great under-achievers to title contenders.

The former Perpignan and Italy coach had barely got his feet under the desk in the National Rugby Centre at Marcoussis before the start of the 2018 Guinness Six Nations tournament.

In the circumstances two wins and three relatively narrow defeats was not the dismal campaign some observers were predicting. Not on paper at least.

Having let off an uncharacteristically jittery Ireland at the Stade de France on opening weekend - and those words should not distract from the extraordinary discipline of their injury-time drive into French territory, nor the nerveless execution of Johnny Sexton’s winning drop goal - France were competitive in all four matches, without ever really imposing their own pattern for any meaningful periods of play.

A three-match summer tour of New Zealand was hardly a recipe for confidence-building yet, against an All Blacks team who are undergoing something of a transition, Les Bleus looked hopelessly overmatched.

Remy Grosso’s sixth-minute try at Eden Park brought a furious reply from New Zealand and the French defence was too often cut apart with simple moves, the difficulty of stitching together defensive solidity after years of inconsistent selection brutally exposed.

It was more of the same in the following two games, with a heroic rearguard effort in Wellington after Benjamin Fall’s 11th-minute red card somewhat papering over the cracks.

Parra started all three games and was named captain for the third encounter, only to be replaced by Serin in just the seventh minute.

The autumn Tests were against less severe opposition but the same criticisms surfaced following narrow defeats at the Stade de France against South Africa and Fiji, sandwiching a victory over Argentina in Lille.

If you want to characterise Brunel’s France in relation to that of his hastily-ousted predecessor Guy Noves then they are a team of grinders.

The 2018 vintage arguably created fewer chances than the teams sent out by Noves, although a more limited game plan meant that, when they did get in a position to score, they converted more often than their predecessors, whose high-tariff final pass too often went astray.

France are not short of attacking talent behind the scrum, although the loss of Racing 92’s Teddy Thomas - often the unpredictable element which has confounded tightly-drilled international defences - on his first match back for club after five months out with a thigh injury, is a blow whose significance cannot be underestimated.

France became Under-20 world champions in 2018 and two of that class feature in the 31-man squad for the Six Nations.

Romain Ntamack is yet another choice for Brunel at outside half - though conceivably more likely to get his senior debut at centre - while Brive prop Demba Bamba will hope to build on his sole senior appearance when coming on as a substitute in the losing cause to Fiji last November.

Brunel as much as any club or national coach in recent French history is a man whose teams rely on the comforts of home.

That much was evident in the 2018 tournament, when they pushed Ireland all the way and then shocked England in round four.

Once again they have a home opener and defeating Wales will have been occupying the mind of the 65-year-old almost from the moment the team dispersed in November, following that historic first loss to Fiji.

Get off to a Friday-night flyer against Wales and suddenly a trip to Twickenham nine days later will seem a whole lot more appealing.

If they suffer a reverse against Warren Gatland’s men, France will have only the ever-improving Scots to look forward to on home soil before the end of the championship.

No Scottish fan will need reminding that head coach Gregor Townsend was among the tryscorers the last time France suffered home defeat to the XV du Chardon in 1999.

If their hosts have lost the first two matches of the 2019 Six Nations, there might never be a better time to break the sequence.