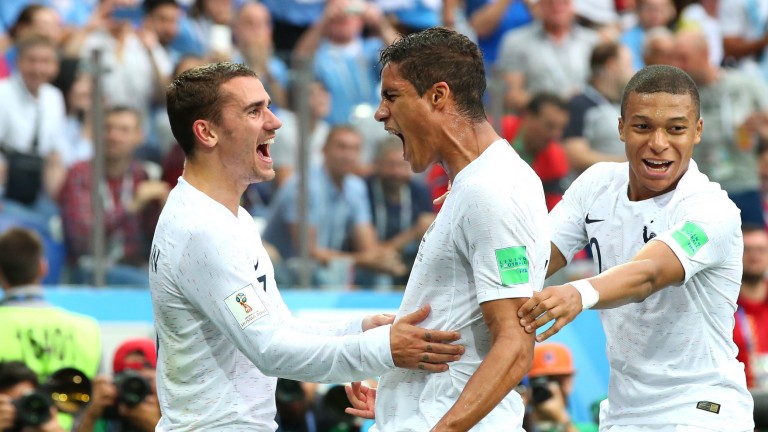 France were promoted to World Cup favourites after they became the first team through to the semi-finals by beating Uruguay 2-0 in Nizhny Novgorod.

Raphael Varane broke the deadlock shortly before half-time and the game was settled by a shocking mistake from the usually reliable Uruguay goalkeeper Fernando Muslera, who let a long-range Antoine Griezmann effort past him.

Didier Deschamps' side, who started the competition as 13-2 shots, were trading at 5-2 after the victory as they awaited the winner of the Friday evening semi-final between Brazil and Belgium. Before that tie Les Bleus were available at 11-10 to reach the final.

Griezmann was voted the man of the match and is 16-1 with Sky Bet to claim the Golden Ball with teammate Kylian Mbappe clipped to 3-1 favourite to be named as the best player of the tournament.

Betway have also cut Mbappe to sign for Real Madrid by the end of the summer transfer window with the teenager 9-4 from 7-1 to head to the Bernabeu with Paris St-Germain 4-11.

It was ultimately a comfortable tie for France, but they did need a fine save from Hugo Lloris to maintain their lead and their skipper became the 11-4 market leader with Sky Bet in the Golden Glove market for the best goalkeeper at the finals.

Uruguay, 30-1 at the outset, missed the injured Edinson Cavani but can be proud of reaching the last eight. The South Americans were trading at 7-2 ante-post to be eliminated at the quarter-final stage.