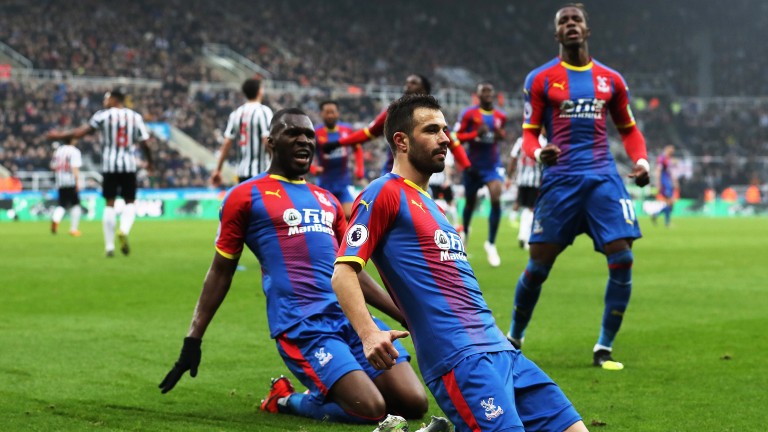 Luka Milivojevic could convert from the spot for Crystal Palace against Man City in the Premier League
Ian MacNicol
1 of 1
By Liam Flin 7:12PM, APR 12 2019

Wolves have a tendency to struggle against sides who allow them plenty of possession and they could go behind to a Saints side who have seen less of the ball in each of their last six assignments.

James Ward-Prowse looks the most likely candidate to open the scoring. He has scored six goals this season, three of which have come in his last five matches, and he is often deployed to take free kicks.

No Manchester United player had more shots against Barcelona in the Champions League than Marcus Rashford (four) and the speedy forward could mark his performance against West Ham with a goal.

Rashford is in good form with three goals in his last six matches and he could capitalise against a leaky Hammers defence.

Luka Milivojevic is one penalty away from equalling Andrew Johnson's Premier League record of 11 spot-kicks scored in a season and he could draw level with the opening goal against Manchester City.

The Citizens were sloppy in midweek against Tottenham and, vulnerable in the wing-back positions, they could be drawn into fouling Palace's speedy wingers Wilfried Zaha and Andros Townsend in the box.

No Premier League player has had more shots than Liverpool's Mo Salah's 111 this term and the Egyptian could draw first blood against his former club.

Salah scored a massive late goal in the context of the title race in Liverpool’s 3-1 victory at Southampton last week and still leads the way as the Reds’ top scorer with 18 goals, one behind the league’s most prolific frontman Sergio Aguero.