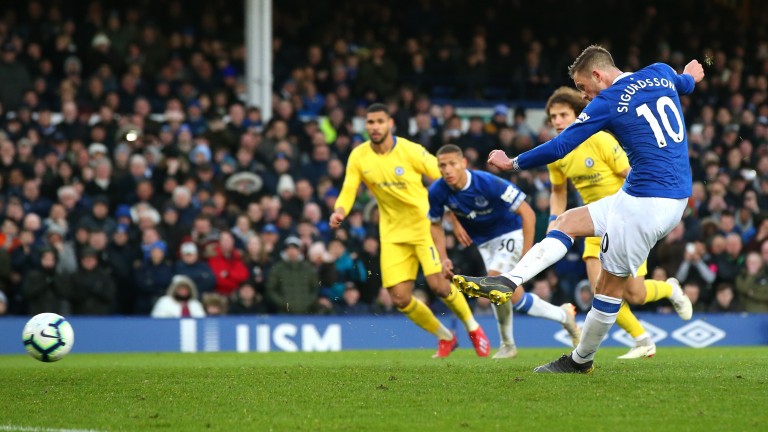 Everton's Gylfi Sigurdsson has impressed in the Premier League this term
Alex Livesey
1 of 1
By Liam Flin 6:54PM, MAR 29 2019

Manchester United have conceded in seven of their last eight home league fixtures and a Watford player could be worth backing to open the scoring at Old Trafford.

The Hornets are in hot pursuit of a top-seven berth and, deployed at the forefront of their attacks, Deulofeu has been in form, notching a consolation away to Manchester City after hitting a hat-trick in Cardiff.

No West Ham or Everton player has taken more shots than Gylfi Sigurdsson's 69 this term and the Icelandic maestro can draw first blood for the Toffees in the capital.

Everton's first-choice penalty-taker and a danger from free kicks, Sigurdsson has 12 league goals to his name and can add another against a Hammers side who he scored against in the reverse fixture in September.

Rumours surrounding Eden Hazard's Chelsea future continue to circulate but the Belgian is still putting in strong performances for the Blues.

He netted a brace against Russia and scored the opener in Cyprus for his national side during the break and has had significantly more shots (76) than any other Chelsea player this campaign. He can add to his 13 league strikes against a permeable Bluebirds defence.

Sadio Mane's scintillating form has seen him catch up with Mo Salah in the Premier League scoring charts and he can outline his importance with a vital strike against Spurs.

Mane scored and laid on an assist in Senegal's win over Mali on Tuesday and the last time the Reds scored and he was not on the scoresheet was against Brighton in January.