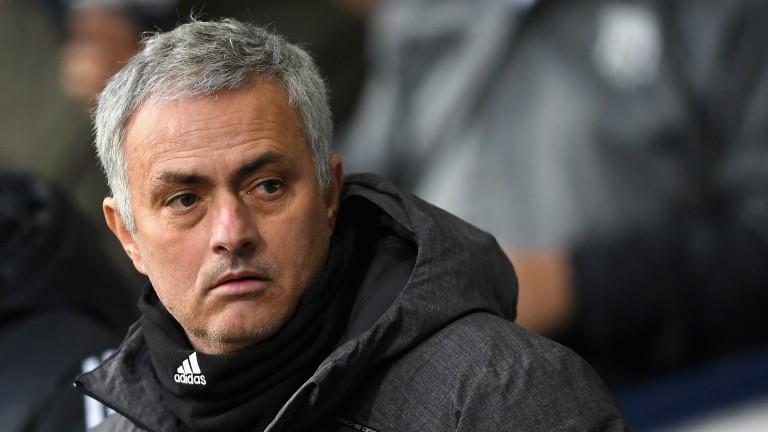 If at first you don't succeed then try and try again.

That seems to be the motto for Jose Mourinho, who will continue his quest for Premier League glory with Manchester United after signing a contract extension at Old Trafford until at least 2020 with an option for a further year.

Some bookmakers have already paid out on Manchester City winning the title this season with the leaders 12 points clear of neighbours United but Mourinho is eager to come back stronger for next term having already signed Alexis Sanchez earlier this month.

Bet365, one of those firms to already declare the race over, are betting on next season's Premier League title battle with United rated 9-2 second-favourites in a market headed by 8-13 shots City.

Chelsea come next at 8-1 from 9-1 Liverpool, but the north London challenge is not expected to amount to much with Tottenham and Arsenal 16-1 and 20-1 respectively.

It's already shaping up to be a two-horse race between the local rivals as Mourinho takes aim at Pep Guardiola and the Portuguese was delighted to be hanging around Manchester for the fight ahead.

He told United's official website: "I am really honoured and proud to be Manchester United manager. I would like to say a big thank you to the owners and to Mr Woodward (executive vice-chairman) for the recognition of my hard work and dedication. I am delighted they feel and trust that I am the right manager for this great club for the foreseeable future.

"We have set very high standards - winning three trophies in one season - but those are the standards I expect my teams to aim for. We are creating the conditions for a brilliant and successful future for Manchester United."

Mourinho's three titles, as he likes to call them, were relatively minor trophies in the League Cup, Europa League and Community Shield, but how does he go about challenging City for the Premier League?

He scored 53 Premier League goals in three full seasons with Arsenal and will form a devastating front three alongside Anthony Martial and Romelu Lukaku.

At 22 and 24, Martial and Lukaku definitely have scope to improve, while United are in safe hands defensively with David de Gea in goal.

A commanding centre-back would not go amiss, particularly as Victor Lindelof has disappointed, although Mourinho has been unfortunate with the injuries suffered to the speedy Eric Bailly.

United have not lost a Premier League game with Pogba starting since October 2016 with Mourinho's men not looking anywhere near the same kind of threat when the Frenchman is sidelined.

However, even with Pogba, United are not rated a great deal higher than Chelsea and Liverpool in this season's match markets - a factor bet365 expect to change by the time next season comes around.

"This season is done and dusted as far as we are concerned," said bet365's Steve Freeth. But the signing of Alexis can only help Jose to claw back the deficit to City."