Transfer tracker: Analysis of the latest deals in the Premier League and EFL

Wolves snap up another Portuguese youngster 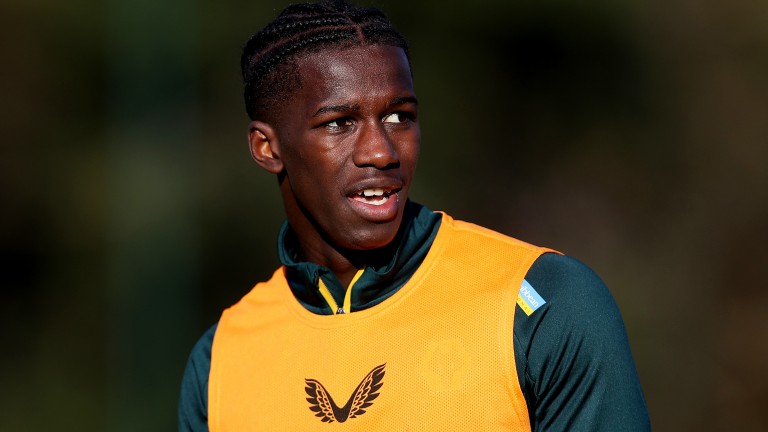 Lincoln are determined to have a better second half of the season and have snapped up proven League One striker John Marquis from Portsmouth on a short-term deal until the end of the campaign.

The Imps have lacked a focal point in attack for much of the season due to the ongoing injury problems for Tom Hopper, who has been out of action since early September.

And their manager Michael Appleton will be hoping to get the best out of 29-year-old Marquis, who cost Portsmouth a seven-figure fee - reportedly just under £2 million - when joining the club from Doncaster in July 2019.

Marquis top scored for Portsmouth last season with 16 league goals but he has struggled this term - notching four in 19 league appearances - prompting Pompey manager Danny Cowley to admit the move was the best solution for all parties.

However, Marquis will be a regular starter for Lincoln and his intelligent hold up play should compliment Swansea loanee Morgan Whittaker and Anthony Scully in an exciting Imps' attack.

Verdict Can get back to his best

Portsmouth manager Cowley is looking to shake things up for the second half of the season and has added plenty of extra pace an dynamism with the loan acquisition off Tyler Walker from Coventry.

Walker struggled for minutes in the Championship but he has fared better in League One and scored 13 league goals in 29 appearances during a loan spell with Lincoln in the 2019-20 campaign.

Cowley wants his team to play with greater energy as they strive to get into the playoffs and has decided that Walker, who can play across the front line, is a better fit than the now-departed Marquis.

Verdict Should return to scoring ways

Wolves have focused heavily on the Portuguese market in recent years and have added an 11th Portuguese player to their squad by snapping up 21-year-old winger Chiquinho from Estoril.

Chiquinho started his career in the youth ranks at Sporting Lisbon but he move to Estoril in 2019 and has only recently emerged as a first-team regular.

He has contributed three goals and one assist this season and looks like being one for the future rather than somebody who will immediately challenge for a place in Bruno Lage's starting 11.

However, he is rated highly enough to have made his debut for the Portugal Under-21s in November last year, coming off the bench to replace new Wolves teammate Fabio Silva in a 1-0 victory away to Cyprus.

Tottenham are keen to fast-track striker Kion Etete, who started the season on loan at League Two Northampton and will finish it with League One Cheltenham.

Etete is a tall, pacy forward who took a while to adjust to senior football but started to look the part towards the end of his five-month stint at Northampton.

The 20-year-old notched four goals in his last nine appearances for the Cobblers and his physique and movement make him an ideal acquisition for Cheltenham, who are used to having a smaller share of possession and like their forwards to be able to stretch opposition defences.

Verdict Can handle the step up in class

Newcastle's January recruitment drive continued with the capture of striker Chris Wood from relegation rivals Burnley and it will be fascinating to see which club benefits most from the deal.

There was no choice in the matter for Burnley, who had to agree to Wood's sale after a release clause in his contract was met, but the deal gives them extra funds at a time when there is still plenty of time for squad strengthening.

Wood has signed a two-and-a-half year contract on Tyneside but his capture appears to have been determined by short-term factors.

Newcastle's first-choice striker Callum Wilson faces a further eight weeks on the sidelines so there is an obvious gap for Wood to fill.

However, the New Zealander is far from a like-for-like replacement for Wilson, and his acquisition may require a tactical change from Newcastle manager Eddie Howe, who has always liked his teams to get the ball down and play.

Wood thrives on crosses into the box and could score a few uncomplicated goals and provide a decent foil for Allan Saint-Maximin, who will be urged to feed off flick-ons and knock downs.

The 30-year-old's move will be an immediate loss to Burnley but he is having a poor season, scoring three goals in 17 games, and will have to be much more productive for the Toon if he is to justify the exorbitant fee.

Verdict May struggle to justify the fee

Lucas Digne never seemed to see eye-to-eye with Rafa Benitez and his switch from Everton to Aston Villa is probably a sensible one for all parties.

The French left-back topped Everton's assist charts in the 2019-20 and 2020-21 seasons, laying on seven goals in each of those campaigns, but he has failed to deliver a single assist in 13 league appearances this term and was part of a shaky defence which suffered heavy home defeats against Watford and Liverpool.

There are ongoing question marks over his defensive capabilities but a fully-motivated Digne is an excellent attacking asset and offers much-needed competition for Matt Targett, who has made the Villa left-back spot his own.

Digne is probably the more offensive minded full-back and could get the nod whenever Steven Gerrard is inclined to favour a more attacking strategy.

Verdict Assist machine but suspect at the back

Watford needed to tighten up defensively and will be delighted by the capture of Brazilian central defender Samir from Udinese.

Deals between Watford and Udinese have been commonplace for several seasons due to both being owned by the Italian Pozzo family - Gino hold the reins in Hertfordshire while his father Giampaolo is the long-term owner in Udine.

However, the transfer of Samir has not gone down well with a section of Udinese fans, who are irritated by the loss of a key player.

Samir has been a regular presence at the heart of the Udinese rearguard and his strength and speed should stand him in good stead as he attempts to make the adjustment to English football.

Watford were desperately short of quality centre-backs and the arrival of the Brazilian should improve their chances of survival.

Verdict Could make a big difference

Arsenal have a lot of exciting young players, including 20-year-old striker Folarin Balogun, who could be an excellent loan acquisition for Championship playoff hopefuls Middlesbrough.

Aubameyang's recent fallout with Mikel Arteta might have paved the way for more opportunities but it is high time Balogun played on a regular basis and his pace and movement should soon mark him down as significant threat to second-tier defences.

Boro manager Chris Wilder is a tough taskmaster but his teams play vibrant football and that should allow Balogun to make a big impact over the next few months.

Verdict Can make an instant impact

Fleetwood banked a £1 million fee when they sold promising defender James Hill to Bournemouth earlier this month and they have quickly invested a chunk of the fee in powerful striker Ellis Harrison, who arrives from Portsmouth.

Harrison seemed to have lost his way at Pompey - failing to score in 11 league appearances this season - but he should get a lot more opportunities at Fleetwood and his physical style could give a new dimension to their attack.

Fleetwood play some attractive football but they now have the option to go more direct if they desire and were handed an early return on their investment on Saturday as Harrison the only goal of a 1-0 success at relegation rivals Doncaster.

His first-team opportunities at Ibrox were limited by the consistency of club captain James Tavernier but Patterson has already won six senior caps for Scotland, scoring in November's World Cup qualifying win in Moldova.

He appears more comfortable attacking than defending at this stage of his career and may not provide a quick fix to Everton's woes but, at 6ft 3in, he could develop into a powerful, all-action full-back.

Verdict Work in progress but a decent long-term prospect

Another defender arriving at Goodison Park is Ukraine international left-back Vitaliy Mykolenko, who could have a big role to play in the second half of the season after Lucas Digne left for Aston Villa.

Mykolenko started four of Ukraine's five matches at Euro 2020 and, at the age of 22, has left boyhood club Dynamo Kiev to seek his fortune in the Premier League.

He made his senior international debut as a teenager in 2018, earning praise from Cristiano Ronaldo after a goalless draw with Portugal a year later, but he may need time to settle in England, especially given the uncertainty over Rafael Benitez's future at Everton.

Verdict May face a tricky start to his career in England

England right-back Kieran Trippier has become the first signing of the new era at Newcastle and the 31-year-old looks a shrewd addition to the Magpies' squad.

Newcastle are in a relegation battle so it makes sense to turn to a proven Premier League performer and Trippier, who won La Liga with Atletico last season, also played in the 2019 Champions League final for Tottenham and the Euro 2020 final for England.

His set-piece delivery is another useful quality and he played under Newcastle boss Eddie Howe at Burnley, which should make his return to English football even smoother.

Verdict Solid signing who can make an instant impact

Fleetwood chairman Andy Pilley has described James Hill as "looking like a Rolls Royce for us in League One" and the 19-year-old centre-back could be playing in the Premier League before long.

A move to Championship leaders Bournemouth looks an excellent stepping stone for the highly-rated Hill, who earned a call-up to the England Under-21 squad in November.

He made his Fleetwood debut at the age of 16 and has racked up 37 league starts in the past two seasons. He joins a solid Cherries unit who have conceded only 20 goals in 25 league matches.

Verdict A smart move for all parties

Defensive reinforcements are the priority for Watford, who have lost their last six Premier League games, conceding 16 goals, and Nice left-back Hassane Kamara is the first to arrive.

Comfortable in a wing-back role, the 27-year-old won five Ivory Coast caps in 2021 but is not in their Africa Cup of Nations squad so could feature in the weekend FA Cup tie at Leicester.

Kamara is an experienced campaigner in the French top flight, making the Ligue 1 team of the year as a Reims player in 2019-20, although he started only seven of highflying Nice's 19 games this term.

Verdict Could prove a useful recruit

West Brom have struggled for goals in the Championship, scoring only six times in their last ten games, and they will be hoping that USA international Daryl Dike can sharpen up their attack.

The 21-year-old, signed on a permanent deal from MLS club Orlando City, enjoyed a successful loan spell with Barnsley last season, scoring nine times in 19 appearances to help the Tykes to a surprise fifth-placed finish in the Championship.

Dike, a regular goalscorer in MLS after returning to Orlando from Oakwell, has notched three times in eight games for the USA and should provide the attacking focal point that West Brom need.