Tottenham and Chelsea could be deadlocked after Wembley first leg 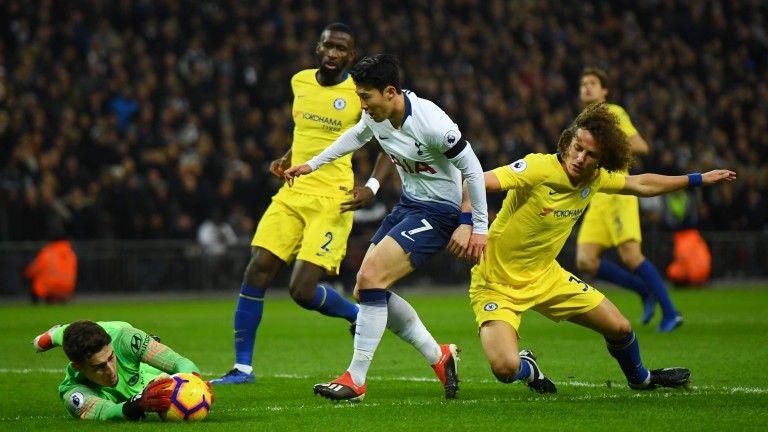 Tottenham thumped Chelsea in their Premier League clash at Wembley earlier in the season, but things could be a lot tighter when the London rivals meet in the League Cup semi-final first leg.

Spurs produced a dominant display in that 3-1 success in November, which was the first defeat of the campaign for Chelsea on an evening when Mauricio Pochettino's side finished with nine shots on target to the visitors' two.

However, early goals often change the dynamics of a game and Spurs were two up inside 16 minutes. The betting is very different now, reflecting Tottenham's improved run of results that were possibly sparked by that Premier League encounter.

From being favourites at Wembley last time, Chelsea now find themselves reasonably priced outsiders. This is a game where the stakes are high, the atmosphere will be tense and the draw looks the best bet.

Tottenham are in fine nick with 14 wins from their last 17 matches and they have racked up 22 goals in five fixtures since booking a semi-final spot thanks to a 2-0 success at north London neighbours Arsenal.

Dele Alli, so often the scourge of Chelsea in recent outings, was outstanding at the Emirates and the front four of the former MK Dons man alongside Harry Kane, Christian Eriksen and Heung-Min Son will send the Spurs supporters heading to Wembley in a confident mood.

Tottenham are four points above Chelsea in the Premier League table and yet the expected goals standings rate the Blues the better side.

Either way it's a tight one and Spurs, without a trophy since beating Chelsea in the 2008 League Cup final, still need to prove themselves in the heat of a battle when the silverware is edging closer to being dished out.

If Chelsea perform as poorly as they did in the league then they will get beaten again and be in need of a huge comeback at Stamford Bridge in the second leg, although the Blues have suffered just three defeats under Maurizio Sarri.

The Italian will surely have learned plenty from that Wembley trip when Chelsea were fortunate to escape with just a two-goal defeat and David Luiz is unlikely to be quite so bad second time around.

Eden Hazard was kept relatively quiet by Spurs and Alli was all over playmaker Jorginho, leaving a sorry Sarri to say afterwards: "I think we played very badly in all directions - physically, mentally, technically and tactically."

Elite coaches don't usually allow lightning to strike twice and these two well-matched sides could be left deadlocked after leg one.

Team news
Tottenham
Lucas Moura has joined Eric Dier and Victor Wanyama on the sidelines. Jan Vertonghen and Mousa Dembele are close to returns, while Erik Lamela is back in the squad.

Chelsea
Cesc Fabregas, Pedro, Willian and Cesc Fabregas need to be assessed. Ruben Loftus-Cheek is out with a back problem.