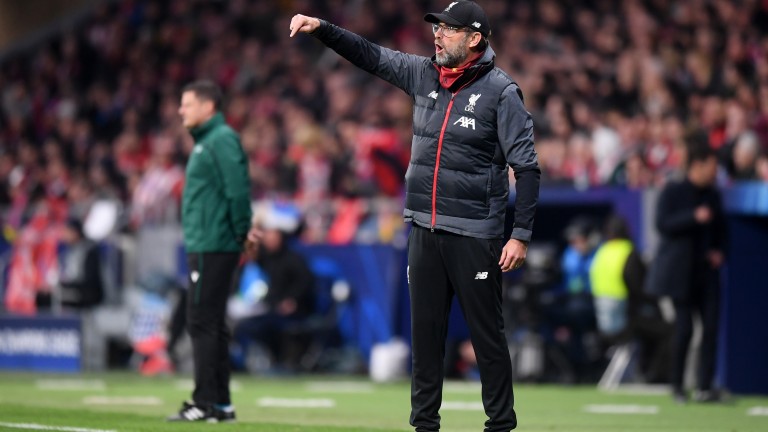 This summer is the time for Jurgen Klopp to bring the likes of Jadon Sancho and Timo Werner to Anfield
Getty Images
1 of 1
UPDATED 5:31PM, MAR 13 2020

Almost five years of Jurgen Klopp’s management has brought success after success to Anfield – but it’s in danger of coming at a price.

Two cup defeats in a week against Chelsea and Atletico plus that drubbing at Watford have been timely reminders that Liverpool aren’t invincible.

And those setbacks can’t be taken in isolation – they had been coming from a while back.

And I actually think this is burn-out and Klopp needs to address it as a matter of urgency.

This has been building and no one who watches Liverpool every week should be surprised.

They go off at 100 miles an hour from the first whistle of the season and they’ve been doing this since 2015 under Klopp.

But there’s a trade-off to be had and you cannot keep going at that pace. At some point this was going to happen.

You accept a Klopp team will not change in terms of approach and style. But this particular team cannot keep doing it, this front three is on the brink and has to change.

And that means that this summer is the time to bring in the likes of Jadon Sancho and Timo Werner.

The first thing they’ll want is guarantees that they’ll be getting game time in among Liverpool’s trio of superstars but if I was Klopp I’d be telling them you’ll get more minutes than you think.

The solution to the front three is not to break it up immediately but Mo Salah, Sadio Mane and Roberto Firmino can’t go on forever so this summer Klopp has to be planning for the next stage.

And also, they are getting found out. Liverpool’s front three have got a way of playing and teams are now figuring out how to defend against them.

It reminds me of when Michael Owen burst onto the scene at a time when back fours used to play high lines and try to condense the pitch. All of a sudden he comes along boasting unbelievable pace who just loved playing against teams who played a high line. So he was figured out and teams started playing deeper on the edge of the box.

Liverpool are getting found out and that will make them easier to play against – so now’s the time to evolve and bring in the next group of top-quality players.

You can't say Liverpool have underachieved just because they only have the league to play for in March.

The objective was to win the Premier League and that’s going to happen in the next week or two.

By any measure that makes 2019-20 a wonderful season at Anfield.

Make no mistake it would have been magnificent if they could have retained the Champions League and we all felt they had a golden chance to do that, but unfortunately they just fell out of form at the wrong time.

And when you are not quite on your game the last team you need to be playing – twice – is a team like Atletico who test you physically and mentally. Against anyone else they might have scraped through.

But winning the Premier League over the next two weeks will give everyone a massive lift and it’s that which will be remembered.

I just hope they get to clinch the title at home to Crystal Palace next Saturday in front of a full house rather than at a half-empty Goodison Park on Monday, though coronavirus may yet determine if that happens or not.

Does Adrian's performance highlight how important Alisson is to Liverpool?

It’s harsh to point a finger at Adrian and I’ve got some sympathy for him – but he can’t be above criticism for the error against Atletico Madrid.

I don’t mind people making mistakes but that clearance wasn’t difficult. He would have done it a million times in training but when it mattered and he had to do it for real his connection was poor.

It still could have fallen to a Liverpool player and he’d have got away with it – but it didn’t.

And Llorente still had plenty to do with his shot.

But the bottom line is that was the moment, so soon after Liverpool had scored, that turned the tie upside down.

On the flip side, of course, do you have a go at Mo Salah for missing opportunities? Do you point the finger at him? Keepers, especially back-up keepers, are soft targets.

Adrian’s problem is that he is playing understudy to a top keeper in Alisson – who, incidentally, has made a few mistakes this season and will make a few more.

Playing every week keeps you match-fit and match-sharp and Adrian simply doesn’t have the benefit of that.

But it’s a collective game so people need to remember the strikers who missed the chances as much as the goalkeeper who made the one mistake.

How should the Premier League deal with the coronavirus?

People’s health is the most important thing and we have to do what is right.

They are obviously saying that big gatherings are a threat and football falls into that category.

With the NBA being suspended and what’s happening in Italy the pressure is being piled on Fifa and Uefa to make a definitive move.

I think, and I hope, that football in Europe is suspended. I don’t know how long for, whether it’s weeks or months, but I think it’s serious enough that it needs a serious response.

Playing games behind closed doors benefits nobody. Just lock it down.

We don’t want to add to society’s problems by mass gatherings at football grounds, so suspend it.

You see Manchester City against Arsenal being called off because someone might have been in contact with someone who has the virus yet I was at Cheltenham on Wednesday, one of many thousands of people under one roof having a really great time.

No one knows what to do and we need some sort of leadership, someone to take the lead and make a decision once and for all.

Slovakia v Ireland is likely to be played behind closed doors, do you think this will work in Ireland’s favour?

I understand the argument that the absence of a home crowd might favour the away team – but Ireland need support wherever they play.

Has Jose Mourinho lost his magic touch or has he just been unlucky?

When you go into a new club at the top level with a different philosophy to the man you replaced, it’s difficult to get a quick fix.

When you do that mid-season without having had a summer to reshape the side, it’s even harder.

Basically, Mourinho has wound up putting square pegs in round holes and it has not been pretty.

Losing Christian Eriksen hasn’t helped, injuries to key players are a major factor, especially the one to Harry Kane, and Mourinho has tried to introduce a few new faces into a group it’s pretty obvious he’s not that happy with.

All I would say is you don’t become a bad manager overnight.

Give Jose Mourinho a transfer window – and I’m sure the board will back him to the hilt – and judge him next season.