Five things we learned from this weekend's football

Arsenal's record on the road could be costly 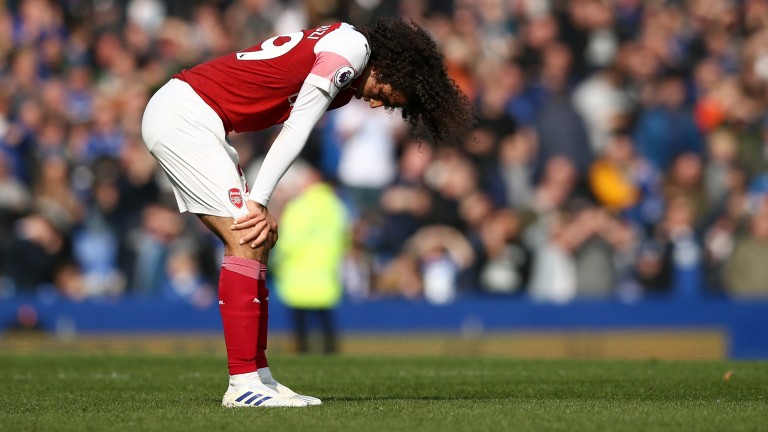 Matteo Guendouzi's Arsenal suffered a setback in their top-four pursuit against Everton in the Premier League
Jan Kruger
1 of 1
By Mark Langdon 8:00PM, APR 7 2019

1 Awful away form could cost Arsenal

There is no sign, even at this late stage of the season, that Unai Emery has found the solution to Arsenal's poor away form after a dreadful performance in Sunday's deserved 1-0 defeat at Everton.

The Gunners, without an away Premier League clean sheet this season, have won just twice on their travels since the start of December - at Blackpool and Huddersfield.

They still have four away games to come at Watford, Wolves, Leicester and Burnley which will decide their top-four hopes.

2 City are not a side to trust on handicaps

It's difficult to pick holes in Manchester City's form as they chase an unprecedented quadruple, but those who like to back Pep Guardiola's side to cover handicaps are having a frustrating time with Saturday's 1-0 FA Cup semi-final success over Brighton their latest narrow victory.

When Gabriel Jesus broke the deadlock after four minutes it may well have been reasonable to expect the 1-7 favourites to kick on, but they seem content to manage matches without the need to exert themselves at such a busy time of the season.

The boring Brighton win followed 2-0 triumphs over Cardiff and Fulham and all the goals came early in those matches too.

City have not exceeded handicap expectations in the Premier League since the 6-0 thrashing of Chelsea on February 10 and even in the FA Cup they fell short of the required mark in their comeback success at Swansea.

It could be worth bearing in mind for next week's match at Crystal Palace. The champions are 1.5-goal favourites despite the trip to Selhurst Park being sandwiched between the two legs of their Champions League quarter-final against Tottenham.

Cardiff are 1-10 to be relegated from the Premier League and it's 16-1 bar the Bluebirds to go down with Huddersfield and Fulham following Burnley's critical victory over Bournemouth on Saturday.

Much has been made of Burnley's difficult run-in - they finish with Chelsea (away), City (home), Everton (away) and Arsenal (home) - but their eight-point buffer to Cardiff has eased the pressure significantly before the Welsh side head to Turf Moor on Saturday.

Sporting Index have Cardiff in for 33 points this season and even if they can get a few more than that, Neil Warnock's men have by far the worst goal difference of the relegation battlers which only increases the chances of a quickfire relegation.

Southampton in 17th are playing well and the Saints host Huddersfield on the final day, while 16th-placed Brighton will believe their home dates with Bournemouth, Newcastle and Cardiff can see them accumulate the necessary points for survival.

4 Time is up for Pulis at Boro

Some are prepared to put up with Tony Pulis's brand of football if it is successful but when the results fail the veteran Welshman has little else to fall back on and Saturday's shocker at Swansea has left Middlesbrough struggling to reaching the Sky Bet Championship playoffs.

Results elsewhere went Boro's way, so they are only four points off the pace, but they have played a game more than their top-six rivals Bristol City and Derby and are on a run of six straight defeats.

5 Sunderland shot stats are on the rise

For much of the season it had looked as if Luton and Barnsley were the best two sides in Sky Bet League One, but Sunderland have given themselves a superb chance of automatic promotion after moving level on points with the Tykes with two matches in hand.

Chasing the game for so long at Rochdale before finding a late winner may have helped boost their shot stats on Saturday as they forced seven efforts on target, however there has been a noticeable positive recent trend.

The Black Cats also smashed in nine shots on target at Accrington and six in the game before at Walsall.