Marcus Rashford is becoming a key man for Manchester United 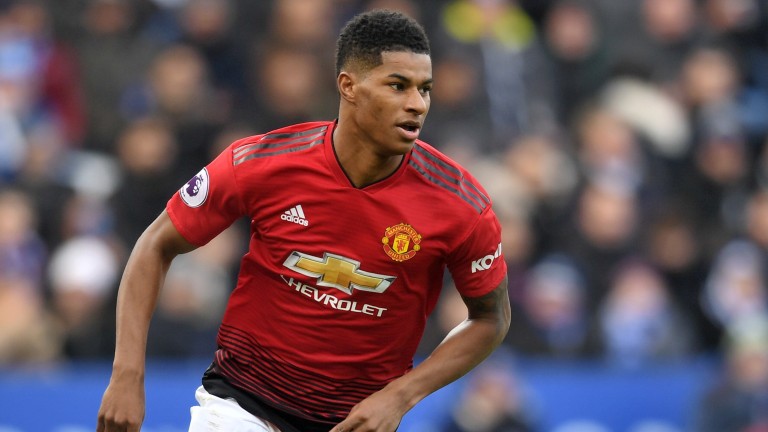 Marcus Rashford got the nod ahead of Romelu Lukaku to start for Manchester United at Leicester and he took just nine minutes to show that Ole Gunnar Solskjaer had made the right decision.

The 21-year-old burst onto a sublime pass from Paul Pogba and swept home his ninth league goal of the campaign, putting him level with Pogba in the United scoring charts.

Rashford never seemed to have the full confidence of Jose Mourinho, who often used him as a substitute or a wide forward.

But Solskjaer considers Rashford to be an out-and-out centre-forward and his confidence in the England man is being repaid.

Rashford has scored more league goals this season than in any previous campaign and six of them have come since Solskjaer's appointment.

He is averaging 0.75 goals per game under the Norwegian and if that scoring rate is maintained United will have a much better chance of climbing into the top four.

2 Fulham lack the industry to survive

Fulham spent a lot of money last summer but they continue to play as a bunch of individuals and are in a dire position after Saturday's 2-0 loss at Crystal Palace, which leaves them seven points adrift of safety in the Premier League.

Ten-goal Aleksandar Mitrovic has scored as many goals as any player outside of the big-six clubs but his contributions are being wasted because Fulham are defending so badly.

The Cottagers have conceded two or more goals in 19 of their 25 league games, yet nothing was done to enhance their defence in the January transfer window.

Pacy forward Ryan Babel and winger Lazar Markovic were brought in to add to Fulham's attacking options but their problems are at the other end of the pitch.

A poor mentality may also be holding them back. They started brightly at Selhurst Park but went down with a whimper after Luka Milivojevic's penalty and will need to show more fight to have any hope of survival.

3 Wolves look best of the rest

Wolves are one of the most impressive promoted sides to grace the Premier League and they may have taken a decisive advantage in the race for seventh by winning 3-1 at Everton on Saturday.

A lot of criticism has been directed at Everton's poor performance, but Wolves deserve great credit for dismantling a side who have spent heavily in the transfer market.

Nuno Espirito Santo's team were just as impressive when defeating West Ham 3-0 on Tuesday and they are probably playing as well as they have all season.

Their supposed weakness was the lack of a prolific centre-forward but that is no longer the case with Raul Jimenez netting four goals in their last three games.

The Mexican's goals could fire Wolves into the Europa League.

Charlton have worked incredibly hard to get into promotion contention in Sky Bet League One but their chances of going up were significantly reduced when they sold striker Karlan Grant to Premier League Huddersfield last week.

Their life after Grant began with a 1-0 defeat at mid-table Fleetwood on Saturday.

The Addicks will now have to rely heavily on 12-goal striker Lyle Taylor, who returns from a three-game ban for this weekend's home match against Southend.

However, the loss of top-scorer Grant, who has netted 14 league goals this season, may be too much of a handicap to overcome.

Sunderland's £4 million deal to sign Will Grigg was one of the last bits of business to be done on deadline day and it could be crucial to the Black Cats' hopes of promotion from Sky Bet League One.

Grigg's arrival came too late for him to feature at the weekend and he was missed as Sunderland laboured to a 1-0 victory at home to basement boys Wimbledon.

It was imperative that Sunderland found a replacement for 15-goal top scorer Josh Maja, who left for Bordeaux last month.

Grigg, scorer of 19 League One goals for Wigan last season, looks the ideal man to get on board.