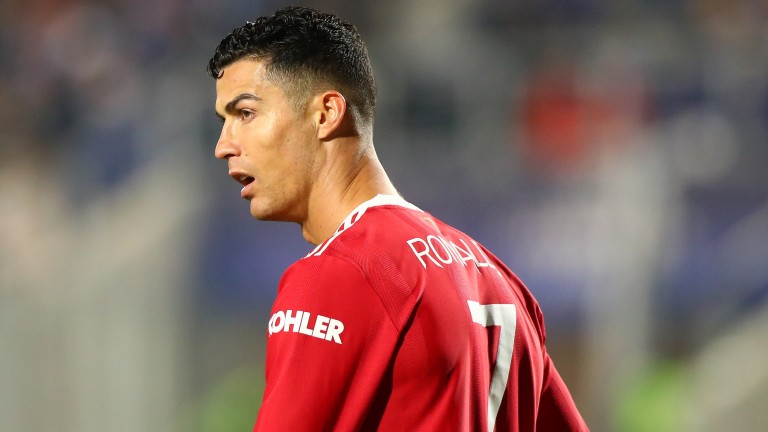 It will be interesting to see whether Cristiano Ronaldo takes to Ralf Rangnick's tactics
Chloe Knott - Danehouse
1 of 1
By Racing Post Sport 4:50PM, NOV 26 2021

We asked our top team of writers and a leading odds-compiler for their thoughts on this week's big talking points and this is how they answered...

What is your best football bet this weekend?

Racing Post's Joe Casey: Both teams to score when Arsenal face Newcastle in the early Premier League game. Both teams have netted in ten of Newcastle’s 12 games this season and they can get on the scoresheet in North London.

Allan Saint-Maximin had the most shots of any player in the league last weekend and can cause issues for an Arsenal side who leaked four at Liverpool.

These are difficult times at Priestfield and red-hot Pompey can exploit those issues. The Cowleys took time getting Portsmouth going this season but they are flying – unbeaten in eight with five straight wins – and can win this one.

Racing Post's James Milton: Brentford have had a tough time with injuries, taking only one point from their last five games, but they face an Everton side who are even more depleted.

The Toffees are missing some key attacking players and have conceded ten goals in their last four league matches so this looks a good opportunity for the Bees to stop the rot.

Betfred's Charlie Walker: Fulham at Preston. The Cottagers look the best team in the league and travel well, having scored 12 unanswered goals in their last three away games. Preston are no mugs but Fulham should have too much for them.

Who are the most vulnerable favourites?

Racing Post's Joe Casey: Peterborough have scored just once in their last five games and have lost four of those. They face Barnsley, who have also struggled this season but could benefit from the fresh ideas of relatively unknown new manager Poya Asbaghi.

This won’t be the prettiest game but Posh look too short in this relegation zone battle.

Racing Post's Steve Davies: Fleetwood have wielded the axe, handing academy boss Stephen Crainey the chance to impress, and he can kick off his tenure in charge by avoiding defeat at AFC Wimbledon.

Fleetwood are without a win in eight but they've found the net in seven of those and have won at Rotherham this term. The short-priced Dons had lost three in a row before beating Crewe, who are pretty poor.

Racing Post's James Milton: Real Madrid are only two points ahead of Sunday's visitors Sevilla in La Liga and two of their last three home league games ended in goalless draws with Villarreal and Osasuna.

Sevilla have lost only one of their 13 La Liga matches, conceding just nine goals, and they had a morale-boosting midweek win over Wolfsburg in the Champions League.

Betfred's Charlie Walker: Crystal Palace look a team to take on at home to Aston Villa. Palace love a draw at home and you would expect an improvement from Villa with Gerrard in charge, plus the new manager bounce you often get.

Would Ralf Rangnick be a good interim appointment for Manchester United?

Racing Post's Joe Casey: Whatever happens in the rest of the season, this is likely to be the most interesting appointment in the Premier League. Rangnick made his name building long term projects so the move to get him in on a six-month contract seems unusual. His single-mindedness has also caused issues with top brass wherever he has gone so his interaction with the Glazers will be worth keeping an eye on.

Also, the defensive effort the German requires will create an interesting clash with a certain Portuguese superstar.

Racing Post's Steve Davies: Michael Carrick's association with Ole Gunnar Solskjaer and a disjointed dressing room always worked against him, no matter how brief the reign.

Someone coming in from afar to bang some heads together isn't a bad idea, though I'm not sure Rangnick possesses that much clout. He's got an almost mythical status over the gegenpress, so it'll be interesting to see how he and Ronaldo get on with that.

Racing Post's James Milton: He is probably a decent option in difficult circumstances but, as Antonio Conte is discovering at Tottenham, it is hard to turn things around quickly.

Rangnick will try to impose his footballing philosophy on a disjointed United team, which will take time, although he should benefit from a soft run of fixtures after their next two games against Chelsea and Arsenal.

Betfred's Charlie Walker: Yes. United have obviously massively underperformed this season with the squad they have. Rangnick has been linked with many English clubs in the past so it will be interesting to see what he can do given some of the great jobs he has done in Germany.

Who should United go for at the end of this season?

Racing Post's Joe Casey: Both Mauricio Pochettino and Erik ten Hag are decent fits for Ralf Ragnick’s style of play so may be best to develop a sense of continuity with the 63-year-old supposedly staying on after the end of the season in a consultancy role.

Either would be a good appointment but United have long been admirers of Poch and he may feel he has unfinished business in the Premier League.

Racing Post's Steve Davies: You've got to give Rangnick a chance. Granted, his pedigree isn't amazing but nor was Tuchel's before he got the PSG gig and he's gone on to do okay.

This crazy lust for silverware shouldn't determine it, however. Jose Mourinho won things at Old Trafford but was a disaster. Improved performances would be enough and if that doesn't happen then try to get Moyes back.

Racing Post's James Milton: Mauricio Pochettino remains the best long-term option for United. He did a superb job at Tottenham and at the age of 49 still has his best managerial years ahead of him.

He doesn't appear to be enjoying the unique pressure of the PSG hotseat - although they're already 11 points clear in Ligue 1 - so a move to Old Trafford suits all parties.

Betfred's Charlie Walker: If Rangnick does a good job and gets them into the top four and maybe wins the FA Cup you could see them sticking with him. I think more likely given his age is they put him in a Director of Football role and go all out for Mauricio Pochettino, who knows the league well and seemingly wants the Old Trafford job.

Give us a winner on the midweek coupon?

Racing Post's Joe Casey: Leeds have been terribly unlucky with injuries but some of their key players seem to be on the way back and I think they can sneak a crucial win against Crystal Palace on Tuesday.

The Eagles have been victorious only once on the road this season and Leeds have been unlucky to win just twice this year.

Racing Post's Steve Davies: Brighton are losing their way after a fine start and West Ham can see them off at the London Stadium. Albion are without a win in eight in all competitions and while that includes the odd excellent effort – 2-2 at Liverpool, for example – they continue to look impotent around the box. They outplayed Villa for periods last week and lost 2-0 -expect something similar to unfold in East London.

Racing Post's James Milton: Crystal Palace draw-no-bet at Leeds on Tuesday. Leeds have been so underwhelming this season, not helped by injuries, and Palace now have a wealth of exciting attacking options.

The Eagles have scored seven goals in their last three away games, winning at champions Manchester City and drawing at Arsenal and Burnley.

Betfred's Charlie Walker: Leicester at Southampton. I wouldn’t put anyone off backing Leicester at evens draw-no-bet against the Saints. The Foxes have not hit the heights of recent seasons but should be favourites for me. I don’t expect a 9-0 this time around but fancy Leicester for the win.