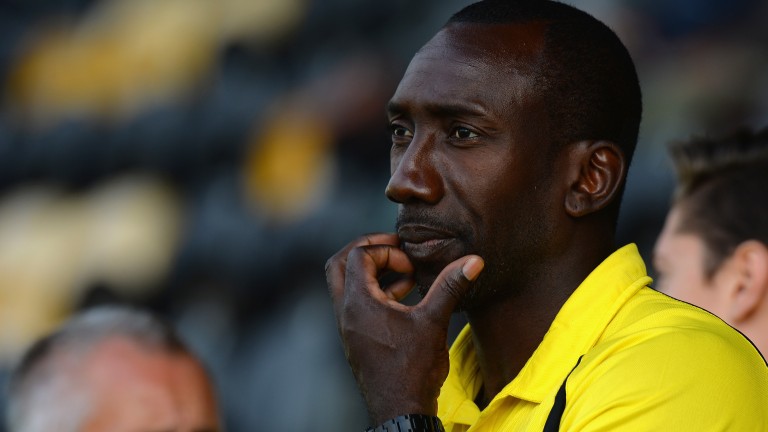 We asked our top team of writers and a leading odds-compiler for their thoughts on this week's big talking points and this is how they answered...

What is your best football bet this weekend?

They haven't won since October – and that was against the only team currently below them in the table – and the squad is wafer-thin. Burton can give them a good working over.

Racing Post's Ian Wilkerson: Huddersfield to beat Swansea. The Terriers have put themselves in the thick of the Championship playoff race and will have had their confidence further boosted by a 2-1 win in the FA Cup at Burnley.

The Swans, meanwhile, have lost their last three league games, the last of which was a 4-1 humbling on their own patch by Nottingham Forest.

The Hatters have taken just one point from their last three home games in the Championship and they may be rusty in just their second game in over a month.

Bet365's Steve Freeth: Ipswich suffered an embarrassing 5-2 home defeat the last time they faced Bolton, but there’s a different atmosphere around the club after the appointment of Kieran McKenna. Their last performance, albeit against a struggling Gillingham, was impressive and they face Ian Evatt’s side at a good time.

Who are the most vulnerable favourites?

Steve Davies: Buoyed by a dream day out and decent performance at Tottenham, Morecambe should feel confident of avoiding defeat in the Robinsons derby at Wimbledon.

Mark Robinson's Dons have lost three in a row without scoring and have a couple of injuries and a suspension to contend with. Stephen Robinson's Morecambe should like the fact that the Dons have failed to win seven of nine at home.

Ian Wilkerson: I wouldn’t be in a rush to back Bradford at home to Salford in League Two.

The Bantams have won just one of their last nine matches at Valley Parade and they could be vulnerable against visitors who have posted victories at Harrogate and Newport in recent weeks.

Joe Casey: West Brom are without a win in their last four games in all competitions and have scored just five goals in their last nine matches.

The signing of Daryl Dike, who worked with Valerien Ismael at Barnsley, will help on that front but QPR is a tricky place to go and the Baggies look too short.

Steve Freeth: Villa Park has been a happy hunting for Manchester United over the years - they haven’t lost in their last 22 Premier League visits - but I’m struggling to remember the last time they were odds-against to win there. The league table doesn’t look great for Villa having lost 11 games, but you sense the hosts are better than that.

Who will finish higher out of Tottenham and Arsenal this season?

Steve Davies: Tricky. I don't particularly rate either though both are clearly improving under their current coaches. Antonio Conte probably has more on his plate in terms of remedial work at this stage, which means Spurs are probably going to be the more inconsistent of the two.

But Arsenal are still a million miles away from the finished article. Spurs for me – on goal difference.

Ian Wilkerson: It looks like the Gunners at the moment, but neither appear to be top-four material. Antonio Conte is beginning to realise the scale of the task he faces at Spurs and the lack of choices he possesses was exposed by an embarrassing first 70 minutes against Morecambe in the FA Cup.

He may not be able to galvanise them enough to finish on a high, unless Harry Kane rediscovers some form.

Joe Casey: Arsenal’s young players have been a revelation this season and they have a clear style of play under Mikel Arteta. Tottenham are still in transition under Antonio Conte and despite their games in hand over the Gunners, Spurs are yet to convince.

Only three Tottenham players have scored more than three goals this season while seven of the Gunners have reached that mark and their more balanced side can finish above their rivals.

Steve Freeth: Arsenal have struggled to finish above their near neighbours in recent seasons after 22 years of supremacy but they can regain bragging rights in a battle that’s sure to go the distance, and their young guns could be the key.

What do you make of Newcastle signing Chris Wood?

Steve Davies: It tells us a lot about the preferred style of Eddie Howe, replicating his Bournemouth formula of wide men whipping balls in for a target.

And if nothing else, Wood is a target. He reaches double figures every year and if he gets another seven this term (to hit ten) to help keep Newcastle up, doubtless it will look like money well spent. To me he's a Burnley player through and through and I wouldn't be expecting much.

Ian Wilkerson: Not quite Kylian Mbappe or Erling Haaland, is he? The euphoria about the Saudi mega-money takeover has been replaced by realism for the strugglers and £25m may seem a lot for a striker who has scored three goals this season.

Having said that, he will provide the Magpies with an attacking focal point and it’s not a bad tactic to boost your options while restricting those of your rivals at the same time.

Joe Casey: Newcastle are in a situation where they need improvement to their squad immediately and Chris Wood provides that.

The Kiwi is now the most expensive 30-year-old in Premier League history but they have considerably weakened one of their closest rivals, which could be vital come May.

Eddie Howe’s side need defensive reinforcements sooner rather than later however.

Steve Freeth: It’s a bit of a comedown from some of the high-profile names that were mentioned after the takeover. However, his Premier League goalscoring record for Burnley is decent, he knows the division and it also weakens a relegation rival. With three goals already, he’s 9-4 to reach double figures.

What's your top pick on the midweek coupon?

Steve Davies: Without a win in eight, being written off, their main striker fleeing - those are the ingredients that bring the fighter out in Sean Dyche's Burnley, and the Clarets can chalk up a victory over Watford on Tuesday.

It's a good time to be playing the Hornets, weakened by Afcon, shipping goals all over the place and with little sense that Claudio Ranieri has the power to do much about it. Burnley can bully them into submission.

The Bees have won three of their last four home league games and have proved a tough nut to crack for others - they ran Manchester City and Chelsea close and drew with Liverpool. United rode their luck against Aston Villa in the FA Cup on Monday and I’m happy to swerve them for now.

Joe Casey: Sheffield United have won four league games on the spin before the weekend including a 1-0 victory over Fulham and seem to have turned the corner after a disappointing beginning to the season.

Paul Heckingbottom’s side should be able to get the better of Preston on Tuesday, who may find they lack the quality to trouble the Blades.

Steve Freeth: It looks hard going for Birmingham at the moment and I can see Fulham scoring a few against Lee Bowyer’s side in midweek – Fulham to score at least three.